By the end of this episode we finally have most of the answers about what is going on with Class 3, which makes this another talky episode. We also end the episode on some exposition, rather than another death, which does at least break the formula up a bit but at the same time feels like a limp ending compared to the previous episodes. The death this week is also much more of a low key one, a simple heart attack for the boy with a weak heart, which happens mid-episode and also in the vicinity of Koichi. We still shouldn’t read too much into that though, as he is our audience perspective character after all. So let’s enumerate the deaths so far, since Koichi’s arrival:

So that’s two classmates and three members of their families. Takabayashi of course dies just as he is about to reveal the truth about Mei, but it is not long before she spills the beans herself anyway. The truth of what has been going on illustrates how the red herring of her being a ghost has been so well integrated. I tried to skirt around this subject previously without giving anything away, but why it works so well is that there is always more than one possible explanation, and the obvious conclusion the viewer is supposed to leap to is always the wrong one. That’s how you properly integrate a red herring into a story (so many writers get that wrong). For example, we had Mei popping up in the doll shop while the shopkeeper said Koichi was her only customer. That leads us to think she is a ghost when the other (and correct) explanation is that she lives there. Nice living quarters above the shop, by the way. Then we had Mei not being seen by the other classmates. Again, we are supposed to assume she is a ghost, perhaps even the ghost of the original dead child from 1972 (who was also called Misaki), but the reality is that her classmates are just refusing to acknowledge her existence, a trick they try again with Koichi this week.

The reason for this is a tough one to get your head around. After the child died in 1972 and everyone pretended that hadn’t happened, that “made the class a place that invites the dead in”, and every year there is an extra student who is dead and doesn’t know it. The class roster and even the classmates’ memories change, so nobody can figure out who the dead person in the class is, and then people start dying. It’s not explicitly stated, but I would presume that is because the class is closer to the world of the dead, but it’s couched in terms of being a “curse”. The students have tried to deal with this in various ways, all of which have failed, except for denying the existence of one student, which sometimes works. That brings the number of students in the class back to normal.

This of course raises a lot more questions. The counter measures tactics clearly aren’t working this year, so why not? Who is the dead person in the class this year? Of course, we could have a double bluff of a red herring on our hands, and it could still be Mei. How does Chibiki fit in? Our suspicions are confirmed this week: he has been around since the original tragedy. Then we have all the shared name coincidences. Back in the first episode Koichi’s new classmates reacted badly to his surname, Sakakibara. Then we have Mei’s surname being the first name of the girl who died in the hospital, and also the name of the original dead student from 1972. Finally we have the teacher Ms Mikami, who shares a name with Koichi’s aunt Reiko, something that has gone completely unmentioned so far. Now that the class is ignoring Koichi as well, will this restore the balance, and if not, why not? The whole premise also has some potential holes in it, but we’ll leave those for now and see how things develop.

Well played, Another. I managed to track down a contemporary forum, with views written at the time this series was being first broadcast. I couldn’t find one person (other than those who had read the manga) who figured out that Mei isn’t a ghost before this episode, so it’s a brilliantly played red herring. If you worked it out, then give yourself a pat on the back. Just don’t do that on the stairs, in an old, creaky lift, or carrying an umbrella. At least this week there wasn’t another phobia to add to our tally. Instead we had an important parable. The curse got started when a group of students refused to accept their loss and pretended it didn’t happen. Accepting a loss is a hard thing to do, but pretending nothing has happened can raise other demons. They might not be the literal ghosts of Another, but when bad things happen there’s nothing to be gained by denying them.

So where do we go from here? There are plenty more questions to be answered, and we find ourselves in a bizarre subversion of a whodunit where the identity of the dead person in the class is key. It’s more of a whoisit than a whodunit. Until the students find that out, nobody is safe…   RP

Well so far, this whole series has been dark, eerie, and an undecipherable mystery.  And that’s exactly how I’d have it.  There’s even one extra perk to the show: the search for the Easter Egg: what horror movie or book will be referenced for this episode?  But I was disappointed to see this episode drawing to an end with explanations but no Easter egg!  I mean, yes, I’m happy to have some answers, finally.  But I loved that little perk of finding the reference.  Well, with so much background I do still have things to talk about.

I feel vindicated.  I had suggested that the “no customers” comment indicated that Mei was, in fact, alive and related to the odd shopkeeper.  She turns out to be her mom.  Simplicity itself.  I’m fairly certain that I’m right about Reiko, Koichi’s sister, since the grandfather says he’s “so tired of funerals”, though at a certain age, that’s undoubtedly a real fact anyway.  I’m trying to figure out the significance of Reiko though in relation to Koichi’s mom.  She’s a graduate of the 1972 class (my birth year; go 1972!) but she died “15 years ago”.  Last episode, Reiko said she was in school “15 years ago”.  Presumably, when mom died, Reiko left school.  Or is it that Reiko is not Koichi’s sister, but his mom?  If so, she’s still at the age she was when she died.  One other interesting thing about the dead is that there is talk of a teacher being significantly ill.  Now, I confess, I’m not 100% sure I have all the names down, but when the pretty teacher walks by Koichi, he says “you’re here early” but she walks by without a word.  Nothing else comes of the scene, but it made me wonder if she’s the potentially ill teacher who has, in fact, died.

The writers have done a great job tying things together so far.  Koichi’s friend with the weak heart has a heart attack; this was set up from the start.  Another thing set up from the start: the class rules.  They’ve talked about it over and over again, but no one thought to explain them to Koichi.  Now we finally learn what they mean: it was important to everyone that they maintain the rules that Mei was “dead”. Koichi had broken that rule and as a result someone was going to die.  So they act as if someone is dead, and it seems to fend off the curse, or whatever it is.  Mei speculates that someone who comes in is actually dead but … “they don’t realize they are dead”.  And just like that, the one movie I’ve been referring to over and over again becomes the focal point of this episode.  (And I thought I’d be without my easter egg!)  The Sixth Sense is at the heart of this story, but no episode makes it more clear than this.  (Well, at least, not yet!)

The story still has the wonderful creep-factor, but leaves us wondering what is to come.  Yes, we’ve gotten some explanation but there’s still more to this mystery than I’ve figured out. 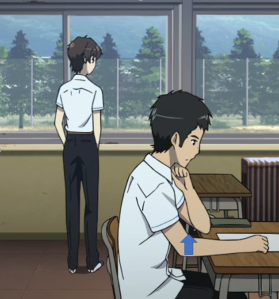 I’ll comment on one final thing.  Prior to the admission that Mei is alive and just the target of some very weird segregation, they do a great job of keeping the viewer wondering.  But there are clues throughout to help us piece it together.  For instance in the scene depicted here, Koichi is speaking to Mei, but we are left wondering if she’s really there because the “camera angle” has a student blocking the view of her. But observe my blue arrow: if you look in the small space, you can see her dress.  It’s not an empty chair.  So the show rewards the observant.  This is definitely not a show for the casual TV viewer who folds clothes while watching because they will miss a ton of brilliant moments like this.

I sure hope the series continues mystifying me and rewarding my viewing skills.  In a show that is perfect to watch for Halloween, let’s also hope for more Easter Egg treats!!  ML

Read next in the Junkyard… Another Episode 6

Author of windowsintohistory.wordpress.com Co-writer on junkyard.blog Editor of frontiersmenhistorian.info
View all posts by Roger Pocock →
This entry was posted in Anime, Entertainment, Reviews, Television and tagged Another, Halloween, Horror. Bookmark the permalink.