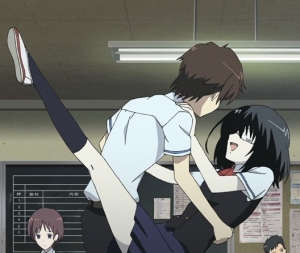 Last week we had a clear outline of the premise of the series, which might have raised a few questions and doubts in the mind of the viewer. This episode addresses some of those issues. Firstly we have the policy of the whole school rather than just Class 3, with the flashback to Kubodera explaining the plan to deny the existence of one student and stating that the teachers outside of Class 3 “will co-operate to the best of their abilities”. Then we have the question of Mei’s agreement. Without that, the plan would be scuppered as it would be easy enough for her to make sure her presence was felt enough that ignoring her was impossible. Kubodera implies that the tragedy would therefore be on her conscience, but she later explains her motivation to Koichi:

Everyone else has to do the horrible deed of ignoring a fellow student. Although they have tried to rationalise it as something other than bullying, their actions are clearly uncomfortably close to that, so being the victim is the lesser of two evils for Mei than being the bully. Her heart is in the right place.

“Welcome to the club, Sakakibara.”

She skips off happily, having just talked about the emptiness of death and how a person is always truly alone despite relationships. She’s a fascinating contrast of a person, and it’s no wonder Koichi has been drawn to her. I think there’s more going on than curiosity too. They are kindred spirits. With their talk of visiting art museums and all their time spent hanging out together we have something verging on a lovely little budding romance, subtle and innocent. They are united in their isolation. Who else do they need? I loved the dream sequence with the two of them having a dance around the class. It was a shame it wasn’t real because their classmates would be obliged to ignore them, but maybe that would be too much of an injection of fun into a series that is working hard to keep the viewer feeling uneasy. And wasn’t that Mei’s first smile of the series, when she looked across the classroom at Koichi?

This was yet another talky episode, with no deaths this week, and plenty of important information and potential red herrings. Sorting out one from the other is a compelling task on first viewing and an enjoyable exercise the second time round. Mei is still talking in riddles:

We learn a lot more about the phenomenon from Chibiki, particularly the futility of checking records because they change while the curse is active and then change back afterwards, along with everyone’s memories. There are growing hints of a mystery around Ms Makami, who is revealed to have also been the assistant homeroom teacher in 1996 and has now returned, and still her shared surname with Koichi’s aunt is going unmentioned. Also, now that the red herring of Mei Misaki being a ghost of the original dead child from 1972 has been abandoned, there is no longer a reason to hide the gender of the child, and he was a boy. I tried to keep mentions of him gender neutral in previous articles, but it has been a difficult task because the dub screwed it up. I can’t pretend to have the greatest grasp of Japanese, having only studied it for a year (quite a while ago!), but I think it’s fair to say that gender pronouns are not generally used in the way they are in English. Instead the person’s name tends to get used repeatedly where it would sound awkward in an English sentence, even when a person is talking about themselves. So in the original Japanese the gender of the dead child is easily kept a secret from the viewer without making it obvious that it’s being kept a secret, simply because every time Misaki is mentioned the name Misaki will simply be used. There is never a need to say “he” or “she”. Basically for every sentence you can think of where you would use “he”, the Japanese would use “Misaki” instead. But the dub can’t really do that, so instead they went with “she” at the start of the series, which annoyingly makes the red herring a massive cheat in the dub. Either somebody considered this the lesser of two evils, or nobody bothered to read ahead when the dub was being scripted. Either way, it’s clumsy.

For the first time we have a cliffhanger ending to an episode, pre- rather than post-death. Kubodera has snapped, and has some warped solution in mind. That solution involves a big knife.

“I don’t know what to do. This is my only choice.”

There’s always a choice, of course. It looks like we’re about to see a very bad one play out…   RP

This episode truly did throw away my Easter Eggs.  I was bummed. And no, I’m not going to pull a last might trick out of my word-hat.  Face to Face makes us come face to face with the rules and what they mean.  It’s the second exposition-heavy episode in a row, too.  But in a way, the end of the horror motifs is interesting now that Sanae is out of the picture.  Yes, she died two episodes ago, but last episode did deal with the fallout (too soon?) of her death.  This is the first episode where the one person to always call Koichi “horror lover” is completely absent from the series.  Instead, we even have a moment of joy as Koichi imagines dancing with Mei.

So what do we learn about “the rules”?  They dictate that no one shall speak of them within the school but it should not be brought up outside the school either and practice exercises include no whispering or walking around.  Ok, that explains why no one can tell Koichi what is going on and only Mei has been able to as she is effectively “dead”.

What other clues are we given?  Mei knew she wasn’t the actual dead person, but she wants to know who is.  Now, here’s an interesting thing.  At the start of the episode, Akazawa mentions Koichi has no siblings and his hands are not cold; also he hasn’t lived in this town before.  Who, then, is Reiko?  I speculated that she was actually Koichi’s mom, but we learn Ritsuko is his mom.  The grandparents sit with Reiko and Koichi in this and lament “my poor Ritsuko.  And my poor Reiko too” but as Koichi speaks to Reiko, they don’t seem bothered by him talking to her.  If she were not there, why wouldn’t they be alarmed or even try to stop him talking to someone who isn’t there?  All we know about Ritsuko is that she died giving birth to him.  And we also know that she went to this school… which is of some interest considering Akazawa said Koichi hasn’t lived here before!

Then there’s the clue from Professor Long Hair.  He tells Koichi and Mei that those susceptible to the curse (if curse is even the right word right now) are family members two levels removed (grandparents to student, in effect) and still living in town.  He goes on to say “think of it as a cell phone signal that starts going out of range”.  Interestingly, Koichi’s dad is in another country and every time they talk, the cell signal goes out.  On top of that, dad can’t seem to remember anything about his wife’s time in the school and he mentions that Koichi was there a year and a half ago… until he realizes his mistake and the cell signal is gone.

Jumping over to Mei, she says “I lost my left eye when I was 4.  It developed a nasty tumor.  I woke up one day and the eye was gone.”  I’ve mentioned it before, but Odin gave up his left eye for wisdom.  Mei does seem to have wisdom.  She realizes that if she were not the subject of this bizarre ostracizing, someone else would be, and she prefers being the victim to being an abuser.  I also realized in this episode that I misunderstood her relationship with the shopkeeper.  I thought it was her mom, but she is not.  However, the shopkeeper would know that Mei is not a customer, so the logic remains intact.  Sadly we meet Mei’s mom and she’s cold and only sees her daughter as a doll.  This leads to a concept that is somewhat sad, but one I think of often: we are all alone.  In a world full of people, we are always only ourselves.  (This gives rise to the interesting comments in The Prisoner episode Fallout, but that’s another story!)   I often say that it sure is nice to find some people who want to take that lonely trip by your side and this episode gives that idea life.  Mei and Koichi are alone now and they choose to take that lonely voyage together.  It’s a lovely sentiment, and a wise one.

Mei lives in two worlds: the living and the dead.  It was interesting to see the painting of her with the slit down the middle of the face bisecting the face.  Considering her dual colored eyes, one seeing and one not, one living and one dead, I think series is meant for people who actually like to think about what they watch.  Alas, if there were an Easter Egg to find, I needed to be living in two worlds at once to see it.  ML

Author of windowsintohistory.wordpress.com Co-writer on junkyard.blog Editor of frontiersmenhistorian.info
View all posts by Roger Pocock →
This entry was posted in Anime, Entertainment, Reviews, Television and tagged Another, Halloween, Horror. Bookmark the permalink.