The Fanservice Debate: Waiting in the Summer Ep 1

Can fanservice ever be justified in anime or is it a disturbing and unnecessary aspect of the genre? In this occasional series we look at the rights and wrongs of fanservice and other questionable content in anime. A warning: this series will have plenty of spoilers and sometimes NSFW discussions and images. This week, the first episode of the love-triangle-with-aliens anime Waiting in the Summer. 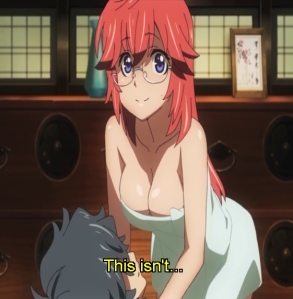 Ichika Takatsuki is fascinated by a new transfer student in his school named Kaito, and feels drawn to her somehow. On his way home from school he finds her fishing in the river, and it turns out that she doesn’t have anywhere to live. Ichika ends up accidentally asking her to stay with him. As much as he loves that idea, he knows there will be repercussions when his sister comes home, but Kaito has nowhere to go, so he can’t just let her go off and pitch a tent somewhere. At Ichika’s house Kaito goes to take a shower while Ichika rummages through his sister’s clothes to find something for Kaito to wear. While he is doing that he collapses. Kaito rushes to his aid, produces some alien tech and a little alien creature from her suitcase, and heals Ichika with a kiss. When Ichika’s sister comes home, accompanied by his friend Kanna (who has a crush on him), they find him on the floor in a halo of light, with Kaito bending over him wearing nothing but a towel. The towel slips. End of episode one!

This is clearly playing in the realms of male fantasy fulfilment, with a cute alien girl who doesn’t quite understand human modesty coming to live with the nerdy guy. There are certain shots and camera angles that are unnecessary to tell the story and are clearly there for a bit of clumsy fanservice: Kaito naked, trying to figure out what shampoo is for, and then a shot of her from behind, sat in the shower. A towel slipping is the most clichéd of wardrobe malfunctions, and the animators make the most of it, showing Ichika’s face pressed into Kaito’s naked chest.

Firstly, there is some degree of restraint shown, in terms of what is and isn’t shown. This is 15 certificate not 18 certificate nudity; enough said. There is a moment where Kaito tries to open the shower door to speak to Ichika and she doesn’t really understand the need for modesty. He tells her to close the door. He sees nothing at that point and neither do the audience, so that was at least a moment where the animators decided not to push things too far. More importantly, this is all integrated with the storyline. Kaito’s otherness is gradually being established and we don’t know much about her yet. The shower scene illustrates that she doesn’t know what shampoo is for, and that she doesn’t really understand the need for modesty. Ichika’s collapse is due to a key event that has happened to him in the past, and Kaito coming to the rescue provides the big reveal of the episode, with her alien friend and healing alien tech. Lastly, the presence of Kanna at the end is the key to those final moments, where the girl who loves Ichika finds him in the arms (well, more than the arms) of another girl, playing nicely into the love triangle set-up of the series. The verdict: not massively gratuitous, and to a large extent essential to building the premise of the series. We’ll give this one a tentative thumbs up (and a towel down).   RP

Read next in the Junkyard… The Fanservice Debate: Sankarea Episode 8
Or read more about this series… Waiting in the Summer

Co-writer on junkyard.blog. Author of windowsintohistory.wordpress.com. Editor of frontiersmenhistorian.info
View all posts by Roger Pocock →
This entry was posted in Anime, Television and tagged Fanservice, Waiting in the Summer. Bookmark the permalink.