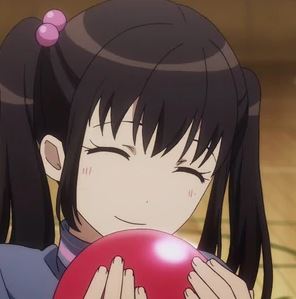 Dating sim games are something of a phenomenon in Japan. The way they seem to work is that there are a variety of different characters who the player can end up dating, depending on the way they play the game. These often get adapted into anime television series, and the results can actually transcend their origins. Clannad is a good example, and the approach the writers took with that series was to pick one of the girls to be the main focus of the series, and then tack on a couple of bonus “what if” episodes focusing on the other girls, who otherwise form part of something approaching a harem anime format for the rest of the series. There is a natural progression from dating sim to harem anime which makes those kinds of games an attractive proposition for an anime studio. However, I have never seen one adapted quite like Photo Kano.

The idea behind the series is a good one. Kazuya Maeda gets given a camera by his dad, and that opens up a world of new possibilities to him at school. He joins a photography club, and forms new friendships with several different girls due to his enthusiasm for photography. The other members of his club are very funny: three perverted boys and a girl who has a knack for blending in stealthily with her surroundings. The first four episodes introduce all of the main characters and contain Maeda’s first encounter with each of his potential love matches, and then we get to the weirdly literal approach to the dating sim origins of the series. Episodes 5 and 6 focus on Maeda’s developing relationship with Haruka, his childhood friend who is gradually becoming something more. By the end of the sixth episode the series seems to have been resolved and I was very happy with the soppy romance… and then episode 7 starts and Maeda is going after a different girl. My wife was watching with me and said “he’s a bit of a player”, but no, it’s not that. The story branches off from a different point in the narrative for each of the remaining episodes of the series, and pairs Maeda with a different girl. These are eight different love stories, all featuring the same teenage boy. The whole series is a sequence of what-ifs. It’s a completely literal representation of the subject matter, and it nearly works.

The Haruka story arc is the best by far, and that’s because the story has room to breathe over a couple of episodes. There are flashbacks to when they are younger, and you end up really understanding the attraction between them and why there have been barriers to their relationship ever blossoming before. If you stop watching at the end of episode 6 then you’ve actually got yourself a really lovely short rom-com series, convincing and beautiful. But curiosity will get the better of you and you will want to keep going. Your enjoyment of the rest of the episodes is going to depend on how much you like each of the girls. The problem is that one episode is never enough for a love story to fully develop from beginning to end, so they tend to feel rushed. One or two of the episodes manage to transcend that problem to a certain extent, but the worst of them feel like a box-ticking exercise. At the more disappointing end of the scale we have the older girl who is the student council president, who never seems like a good match for Maeda, and also the cookery club girl who has very little to distinguish her as a character apart from being the one with the big boobs. At the other end of the scale there is the quiet girl who is forced to constantly change schools and is afraid to commit to friendships and then lose them, and my favourite (apart from Haruka): Mai Sakura, the friend of Maeda’s little sister in the year below him, who is trying to make the grade as a gymnast and needs Maeda to inspire her. Their story never quite progresses in the obvious manner, and they seemed like a lovely match for each other.

If the current trend for an edgy incest storyline in anime bothers you then you will want to skip out the final episode, which ticks the final box with Maeda going after his little sister. There’s a twist in the tale, and it’s the same twist that justifies an incest storyline in just about every incest anime series ever made.

So the issues with this make it a tricky series to actually recommend, and yet the first six episodes are brilliant and a couple of the later episodes are really enjoyable as well. There are better harem anime series, and there are far more clever ways to deal with a dating sim adaptation than this bizarrely literal approach, but if you’re a fan of soppy romances like me then you probably won’t want to overlook a series that gives you eight of them. It also has an important message that some people might find quite inspirational. If you’re feeling lonely and lacking in friends, then taking up a new hobby might just change your life.   RP