Can fanservice ever be justified in anime or is it a disturbing and unnecessary aspect of the genre? In this occasional series we look at the rights and wrongs of fanservice and other questionable content in anime. A warning: this series will have plenty of spoilers and sometimes NSFW discussions and images. This week, the eighth episode of zombie romance Sankarea: Undying Love. 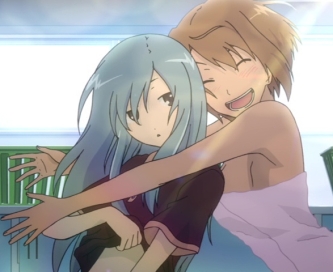 Chihiro has always been obsessed with the idea of zombie girls, and by a strange chain of circumstances he ends up living with one. If zombie girl Rea goes out in the sun too much her body will deteriorate but she is keen to do “something a normal girl would do” and persuades Chihiro to take her on a shopping trip. Meanwhile, Chihiro’s cousin Ranko, who has a massive crush on him and makes no attempt to hide that fact, is enjoying “a nice long bath” at some public baths, which are so quiet that she appears to be the only person there, until she runs into Chihiro’s younger sister Mero and two of Mero’s friends, who are about to go into the baths. Ranko decides to go back in again. 15 certificate nudity happens.

The eighth episode of this series might seem like an arbitrary choice for this article. Sankarea is a very fanservice-heavy series, and this is an episode that has very little of it, instead focusing almost entirely on Rea enjoying her shopping trip and then her monster of a father attempting to kidnap her, so it is an episode that largely drives the ongoing story along. The reason I chose it was to tackle the subject of whether all nudity in anime counts as fanservice. I don’t think it does. A good example is Girls’ Last Tour, which is in my opinion entirely wholesome and suitable for young children (disclaimer: the BBFC doesn’t agree and awarded it a 12 certificate), and yet there is a scene with the two girls in a bath and also one where they go for a swim in an… well I won’t spoiler it because we’ll be doing episode-by-episode reviews next year. But it is entirely tasteful and shown in a way that is as far from fanservice as you can get. Sankarea gives us a bit more of a grey area here, but I think it leans towards wholesomeness for the scene in question far more than it leans towards fanservice. Keep an eye on Mero’s two friends when they strip off. They joyfully take their clothes off, look each other up and down, and start giggling. It’s a picture of childish innocence, and a happy little feel-good moment.

I think context has to be key. Girls’ Last Tour is never a fanservice series, but Sankarea most definitely is. Elsewhere in this episode the animators make every effort to give us the pervert-eye-view when Rea is trying on clothes and being kidnapped (although this is very mild stuff with no actual nudity), and also give us various lecherous shots of Ranko in the baths before the other girls arrive. With all that surrounding this innocent little scene it’s far harder to give it a free pass, and harder still to conclude that the animators’ intentions were not to service the fans.

Innocent in isolation, but looking at the bigger picture leads to a more uncomfortable interpretation. Undecided.   RP

Read next in the Junkyard… The Fanservice Debate: We Without Wings Episode 1
Or read more about this series… Sankarea: Undying Love

Co-writer on junkyard.blog. Author of windowsintohistory.wordpress.com. Editor of frontiersmenhistorian.info
View all posts by Roger Pocock →
This entry was posted in Anime, Television and tagged Fanservice, Sankarea: Undying Love. Bookmark the permalink.