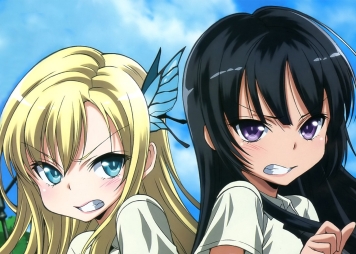 Kodaka Hasegawa has no friends. For reasons that might not come across very clearly to a Western audience, the colour of his hair and his general appearance make everyone assume he is some kind of a dangerous delinquent, so everybody is a little bit afraid of him and keeps their distance. One day he meets Yozara Mikasuki, who is similarly friendless, mainly because she lacks social skills, and has resorted to making up an imaginary friend for herself. The two of them form a school club with the purpose of making some friends.

The premise of this series begins to show the strain pretty quickly. From my little summary, you might reasonably surmise that Kodaka and Yozara are two lonely people who have come together to form a club, so each of them therefore have at least one friend now. For no good reason at all that I could understand, neither of them acknowledge this, and when the club starts gaining members none of them do either. They all continue to think of themselves as friendless, even when the club ends up with six members. It’s a bit odd.

The idea of social misfits trying to find friends is a good one, but it is quickly used as an excuse for a harem anime, with all the girls falling in love with Kodaka, for some strange reason. These harem anime series can work really well when the main character has special qualities but Kodaka is not an easy character to warm too. Yes, he’s a reasonably nice guy and displays the occasional act of bravery, but ultimately he proves himself to be a coward, running away from any situation that might lead him into an actual relationship. Eventually, particularly in the second series, that becomes horribly unfair on the girls, and it does feel like he’s stringing them along, so I ended up disliking him quite strongly by the end of it all, and that spoils the enjoyment of the series somewhat. This is also one of those series where the novels were ongoing, so it doesn’t end with any kind of a resolution. I’m used to that, and it’s frustrating, but the final episode is something else in terms of failing to deliver on what the viewers want, wasting time with newly-introduced characters rather than making much attempt to move any of the relationships or friendships towards any kind of a conclusion.

There is still plenty to enjoy along the way. Some of the characters have major secrets, so there is an air of mystery to some of the episodes, and we do get plenty of exploration of the pain of being a teenager who struggles with socialising. But for every episode that moves the story forward there are three or four that tread water, relying on misfiring comedy or lazy fanservice, which is oddly intermittent throughout both series and disappointingly does extend to the youngest of the characters.

As for the characters themselves, I have already discussed Kodaka. Yozara is abrasive but is probably the girl who seems the most like a real person and also has the most interesting back story. Sena seems to be the fan favourite, a rich blonde who is the best at everything in the school, but being popular doesn’t equate to genuine friendships. Yukimura I can’t really say much about without spoiling a huge twist, so I’m not going to. Rika is initially an awful parody of chunibyo girls in other series, such as her namesake in Love, Chunibyo and Other Delusions, and then quickly sheds her chunibyo origins (mainly because the writers forget most of the time, I think) and turns into a hideous stereotype of a nerdy pervert. Kobata is the obligatory little sister, who is bizarrely another chunibyo character, obsessing about fantasy-based anime, but she is quite a fun character, albeit entirely predictable. And the less said about Maria the better, the ten year old “club advisor” who wears a nun’s short habit with a cut-out in the hem in the shape of a cross, just to go as distasteful as possible with the visuals. Luckily they all have their moments of humour, and the rivalry between the two younger girls is a lot of fun, especially as it is eventually made clear that it has become a friendship. That was a nice touch.

I can’t in all conscience recommend this series, although it did entertain me just enough to keep me watching right to the end of the second season. Most of the time it’s disposable fun, and occasionally surprised me in its maturity of storytelling, but only occasionally. There are much better examples of the genre.   RP

Author of windowsintohistory.wordpress.com Co-writer on junkyard.blog Editor of frontiersmenhistorian.info
View all posts by Roger Pocock →
This entry was posted in Anime, Entertainment, Reviews, Television and tagged Haganai. Bookmark the permalink.