Shakugan no Shana: Season One (Review) 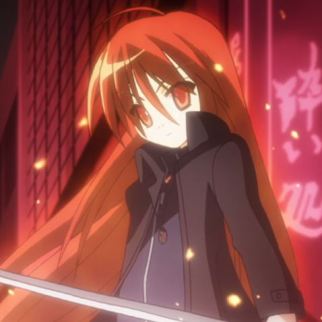 This is not the kind of series I often go for, but it was a good price in a second hand DVD shop so I thought it was worth a try. What tends to put me off this kind of series is the sci-fi element. It’s not that I can’t enjoy sci-fi, because I’ve watched plenty of it, but as soon as you get these kinds of big battles with people flying around with swords and huge explosions etc, I tend to stop caring about what’s going on, and the spectacle of impressive animation alone is not enough to keep me interested. There has to be some strong character stuff going on as well to make me want to stick with a series like this.

We’ll get to that, but first let’s look at the sci-fi element to this, which is clearly its main selling point. I found it all horrendously complicated, but the basics I managed to pick up were that there is a parallel universe called the Crimson Realm, which has to balance with our own world. Crimson Denizens sometimes upset the balance by feeding on the life essence of humans, and Flame Hazes work to maintain the balance and fight any rogue elements. The Flame Hazes work for Crimson Lords, who communicate with them through some kind of an object, the two most notable examples being a pendant and a book. Crimson Denizens can create a seal, which is basically a way of freezing time for humans while they go about their shady business. Balance is maintained by replacing consumed humans with “torches”, which are temporary copies of dead humans who pop out of existence when their flames of existence go out. That’s all pretty complicated and I apologise if I’ve got any of those details wrong, or if you zoned out reading all that. It only really scratches the surface of the storyline for this first 24 episode series, and frankly half the time I didn’t have a clue what was going on.

Luckily, being a bit baffled isn’t actually the end of the world with this series, because the characterisation is strong. Spoiler alert for the first couple of episodes… the main male protagonist is Yuji Sakai, and he gets bumped off almost immediately, living on temporarily as a torch, but he is a special kind of a torch because his flame reignites every day at midnight. That makes him a “mystes”, containing a “treasure tool” called the “midnight lost child”. Yeah, all that fantasy-speak gets really irritating. But it does actually make him an interesting character because he has to grapple with an identity crisis. He’s not quite Yuji any more, and yet he possesses his memories and doesn’t feel like the walking illusion of humanity that he’s supposed to be. The worst thing about it is that when torches go out they are literally wiped from existence so that all their family and friends forget them. The spectre of that terrifying fate worse than death hangs over the series, and early on Yuji loses somebody important in a tragic and compelling story arc.

The lead female character is Shana, who is the main super-powered girl in this series. She might be an expert in fighting, but she doesn’t understand much about living a human life, having a friendship and falling in love, so the series functions extremely well as an exploration of teenage life struggles. The way Yuji’s mum takes Shana under her wing is really lovely. There is an obligatory love triangle, which is yet to be resolved by the end of the first series. One frustration was the extent to which the ongoing relationship dramas get placed on the back burner for a few episodes at a time while the big battles play out, only to be returned to for half an episode here and there. It feels a little disjointed.

I can’t lie: the fantasy/sci-fi stuff did end up getting on my nerves. I know there are a lot of people who take all these bang/flash/swords battles seriously, but towards the end of the series in particular we were almost getting into Scooby Doo territory, with some very cartoonish silly-voiced villains. It didn’t help that one of the main antagonists is a woman named Margery Daw, so I couldn’t stop visualising Matt Lucas as Marjorie Dawes in Shooting Stars. It did nothing to help me suspend disbelief. She’s a dreadful character anyway, a carbon copy of a particular character trope you see in loads of these kinds of series, and frustratingly plays a major part in the whole series.

And yet this was obviously popular. Following on from this first series, there was (deep breath): an OVA episode (that’s on my DVD set), a film, a 24 episode second series, a 4 episode OVA series, and a 24 episode third series. I’ve already got the second series so I will at least take a look at that, but I’m not in a hurry. The relationship drama was the element of this that I really enjoyed, and that was slim pickings throughout the series. As for the flying around with swords, I don’t think that’s ever going to be my cup of tea. But a little bird tells me that this is an anime that keeps getting better, and it’s good enough that I’ll return to it eventually. Most importantly, the two main characters are really likeable, and I don’t mind seeing more of them in future.

I’ll leave you with the opening titles. That deep voiced guy talking about “balls of fire” really got on my nerves after 24 episodes!   RP

Author of windowsintohistory.wordpress.com Co-writer on junkyard.blog Editor of frontiersmenhistorian.info
View all posts by Roger Pocock →
This entry was posted in Anime, Entertainment, Reviews, Television and tagged Shakugan no Shana. Bookmark the permalink.