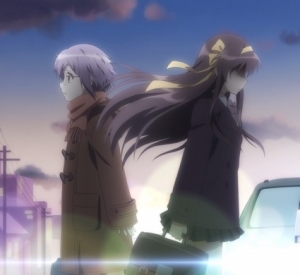 Anyone coming to the first episode of this new series without having seen The Melancholy of Haruhi Suzumiya will find themselves watching a slightly below-par romantic comedy. This is a spin-off that can stand on its own, but to appreciate it you really need to come to the series with a liking for the characters and an awareness of certain significant moments. For Haruhi fans it fails to be the continuation of the franchise that everyone wanted, so it falls between two stools, at least initially. That’s just the start though. Keep watching. This series will come into its own.

The series is set in the parallel universe established in the film The Disappearance of Haruhi Suzumiya, with Yuki now a human girl. Everything seems to have been reset with nobody retaining memories of the events of the film, if they are even the same people in any meaningful way. Yuki now has her own version of Kyon, and Haruhi has her own separate life… for now. For one electrifying moment their paths cross and the episode bursts into life.

Let’s face it, we want to see Haruhi, but the writer had a very difficult task. This is a gentle romantic comedy and Yuki is the star of the show, so she needs to be firmly introduced to us and established before Haruhi can turn up to crash the party. That makes this first episode by necessity something of a frustrating waiting game for the fans. It is helped by Yuki being a very likeable character in her human form, and almost immediately we want to start rooting for her and Kyon. The new group dynamic is also fun. There is a balance between Asakura and Tsuruya who each have a friend they treat almost like a pet: Yuki and Mikuru. And each of them want their pet to be the object of Kyon’s attentions.

The character designs have been updated for the spin-off: a little cuter, younger looking, with less defined features. This works reasonably well for most of them, although Mikuru and Kyon in particular are both a little too cutesy. We also have to get used to something that we didn’t have to contend with in Haruhi, and something that I think will be entirely new to Mike: chibi versions of the characters. For anyone who isn’t aware of what that means, these are the moments of heightened emotion that are illustrated in a comedy series by drawing the characters in what the Japanese term a “super deformed” way. It’s a shortcut to displaying characters’ emotions and it’s something every anime fan just has to get used to gradually. I’ve seen loads of series that do that, and in the end it just washes over you and becomes a normal part of the viewing experience, but I can’t say it’s something I’ve ever liked. If the parent series could do without them, it’s a shame the spin-off couldn’t too.

We also have to get used to a lot of anime romantic comedy clichés that we never had to contend with before, like those moments of comedy violence when Asakura lifts up Yuki by her squished cheeks, or Mikuru’s comedy boobs when she’s running, or Asakura supposedly forgetting Kyon is in the room when she’s stripping off Yuki. It’s all a bit tired, but it is interspersed with some great character moments and some bonus dramatic irony for fans of Haruhi. It’s hard for us to accept Asakura as one of the good guys, and that’s played on with her knife skills:

“There’s something about the way you wield that knife.”

It’s also interesting that Yuki gets a funny feeling when she walks past Haruhi, so there are some crumbs for those hoping this series will develop into something more than the silly comedy it at first appears to be. To be fair, it’s also far more than just a comedy, even at this early stage. The Melancholy of Haruhi Suzumiya ended in winter and The Disappearance of Nagato Yuki-Chan starts in winter. It is more melancholy than Melancholy, right down to the choice of incidental music. The silliness is actually an awkward fit for something that is trying to do a much more human, emotional drama than its parent series, and a better balance will soon be struck. Yuki is of course effectively a new character to us, and it’s impossible not to get drawn into her world, one of quiet longing for the boy who once showed her kindness when she was a lost soul in a library, and became her hero. Forget the silly comedy food cravings. The Yuki who is going to matter to us is the one who enjoys her quiet existence, and just wants Kyon to be a part of that.

“I’d rather read here where I can listen to the noise and laughter of the other clubs than sitting at home alone with my book.”

This is a Yuki who has just one friend in the world, and no family. Her horizons are about to be broadened.   RP

I sat down to watch episode 1 of The Disappearance of Yuki Nagato thinking, “This’ll be great!  I get to see old friends again and maybe work on another scifi mystery…”  What the hell did I just watch?!

In fairness, that was largely my feeling when watching the original, The Melancholy of Haruhi  Suzamiya, so should I be concerned?  Probably not.  That ended up being quite good.  Plus, this one had the advantage of making me laugh.  A LOT.

“This is the story of a somewhat shy, bookish girl.”  So says Yuki Nagato.  But she’s not the Yuki I knew.  That Yuki was an android, a strange being who spoke to a data entity and tried to keep a god from destroying reality.  Who is this?  She’s a … well, she said it herself, a somewhat shy, bookish girl.   She’s got a thing for Kyon.  Asakura knows it too and she’s both a help and a hinderance.  Kyon seems to be the same guy I remember, though I think he sounds older.  Episode one focuses on Yuki’s desire to have a Christmas party in the Literary club room.  Really, it’s about her being in love with Kyon but not being able to admit it.

Half a second though… Christmas… December… And it hits me!  The 3 hour finale, The Disappearance of Haruhi Suzamiya took place around this time, didn’t it?  Is this… Are we in the alternate reality Yuki created when she wanted to be a regular girl?  By Haruhi, I guess we’ll have to wait to find out.

The thing with this is, I loved the comedy but was confused by the art.  I had been warned that the art went very cartoon-y, but there are moments when the art is outright magnificent.  So it covers a range and I sort of wish they’d stuck with one model.  I do have to admit that there are some brilliant uses of the cartoon-y art.  At one point, Kyon stands in the background looking more like Gleep or Gloop from The Herculoids than anything remotely human.  I loved watching Asakura shake Yuki so much that her eyes were drawn as spirals.  And I loved when Yuki is asked to imagine something that leads to that really stunning artwork.

Like before, I was a bit uncomfortable with the sexy stuff considering the ages of the characters, but I have to get past that.  In fairness, this series seem to be more about a teen rom-com, so I think it’ll be easier to accept.   I guess it’s because it’s not trying to tell me it’s one thing while it acts as another.  So I’ve come to expect it.  What may be harder to accept is the difference between what is really spoken and what is imagined.  There are some absolutely hilarious moment with Asakura warming her hands on Kyon’s face that has her, seemingly telepathically, letting Yuki know how to flirt.  “That’s some high level flirting!”  But was that said, or just thought for the audience?  It was funny either way, but I wish I knew.  By contrast, it worked far better when Yuki wanted to get a “turkey” but the word “Kyon” appeared on the screen at that moment.  In that instance, it did not matter what was said and what was thought.

Overall it was a fun start but lacks the curiosity factor that a scifi/mystery would have.  Unless you consider the title and the fact that this Yuki is not the same one we knew from before.  It was, in point of fact, a lot of fun being back with old friends, even if some of them were not quite as I remember them.  Maybe, if I stick with it, I’ll find out that there is a mystery at the heart of the story after all…  ML

Read next in the Junkyard… Nagato 2: Joy to the World

Co-writer on junkyard.blog. Author of windowsintohistory.wordpress.com. Editor of frontiersmenhistorian.info
View all posts by Roger Pocock →
This entry was posted in Anime, Entertainment, Reviews, Television and tagged Haruhi Suzumiya, Precious Place, The Disappearance of Nagato Yuki-Chan. Bookmark the permalink.