Nagato 2: Joy to the World 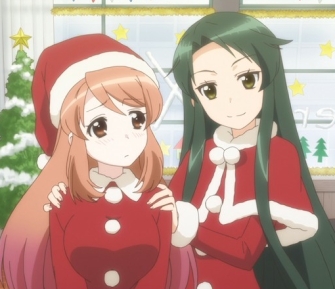 The junkyard presents two articles about the Disappearance of Nagato Yuki-Chan episode Joy to the World.

This week we get to see the opening credits for the first time, which are a lot of fun if you can stomach the sight of poor Mikuru getting abused by Tsuruya. More importantly they provide us with our first look at the new character design for Haruhi, and her prominence in the opening sequence bodes well. The first episode, almost entirely devoid of Haruhi, was necessary to establish the premise of the series and to allow the initial focus to fall entirely on Yuki, but this week the parallel version of Haruhi makes her proper debut in the series and everything suddenly springs into life. When that familiar Haruhi incidental music starts playing it’s a punch the air moment, and there she is in all her usual bossy glory. She’s up to one of her crazy tricks with no respect for the law, painting a huge message on the ground for Santa. That’s our Haruhi.

Much of this episode is told via flashbacks, filling in some important information about the origins of the Lit Club. Poetically, the club’s existence is thanks to Yuki being inspired by Haruhi, although she wasn’t quite sure who she was seeing at the time as she didn’t have her glasses on. But this amazing girl is “not afraid to go after what she wants”, and Yuki realises that she needs to learn to live more like that if she wants to achieve what matters in life. She is inspired by two strong-willed girls. First Asakura:

“What do you want? What are you willing to fight for?”

“That fearlessness, that’s what I need right now.”

That gives her the strength to go out and ask people to join the club, which is otherwise going to be disbanded through lack of membership. Everybody, apart from her only friend Asakura, says no until she meets Kyon. When nobody else was interested, Kyon shows how open-minded and kind he is, and once again he’s Yuki’s hero. The music that accompanies that scene is lovely, as is the music for the whole episode in fact, including a lively arrangement of “We Wish You a Merry Christmas”. I never thought a Japanese animation would make me feel the Christmas spirit so strongly, especially not in the middle of the summer!

In a fun echo of a similar moment in the original Haruhi universe, Yuki sprays “Merry Xmas!” on the club room windows, but unlike Haruhi she mirrors the writing so it can be read from outside. I think that difference is a useful shorthand for their two characters. Haruhi doesn’t care what things look like to outsiders, as long as she’s happy with them from her perspective. Yuki on the other hand is concerned about how she is seen by others, and the impression given by the view looking in to her world is all important. Perhaps somewhere between those two extremes lies the path to happiness.   RP

It’s weird watching this show in March as I wait for spring to begin, only to have the series taking place at Christmas time and playing a REALLY nice instrumental version of Joy to the World.  I’ve become nostalgic for Christmas at a time of year when I am dying for winter to end.  Go figure.   Talk about a mixed message.

Well, we’re back and I do have a complaint.  Anime isn’t live action.  That’s a fact that seems like it doesn’t need to be said, but when you watch live action and a scene takes place earlier than a “current” scene, live action gives some form of acknowledgment.  With anime, you can’t tell if the person looks younger (unless you’re talking about many years younger).  If they don’t have the decency to put a year or some other indicator on the screen, you don’t realize what’s happening.  Such is the case with this story.  We see Yuki planning the Christmas party, then it appears to be over and she’s sitting at home despondent that the Literary Club will be closed down if they don’t have more members.  Sure, the clue could have been the ONE member they had, but I actually assumed this was a post-Christmas letter to the Literary Club president mentioning that one member (Kyon) was not enough.  So it took me until the outdoor scene with Yuki thinking back to finally piece it together.  And while the payoff was still strong, I do think, considering the format, it’s only fair to make it clear.

That fussiness aside, I found this another wonderfully humorous episode.  Most of the humor is the sort you chuckle over.  “You’re like a child the day before a field trip!”  Sometimes, it’s the comedy of Kyon’s misery.  “It’s so friggen cold!”  Or Ms. Asahina’s!  “I really think this is too short!”  Or perhaps it’s just those general observations that make me laugh.  “I never knew turkey was such high maintenance!”  But then I get those roaring laughs too.  Kyon throws a “snowball” and it’s heading right to Asakura’s face and she just snatches it out of the air, then with a great big smile, the word ANGER appears on the screen and she explodes in rage.  (The smile never falters and that makes it even funnier!)  But it’s clear through this that Asakura is the Haruhi stand-in.  She’s taken over as the bossy friend who comes up with all the plans.  She’s more mature than Haruhi was (and presumably not a god), but the trope is fulfilled by her for this series.

Speaking of Haruhi, during one of those flashbacks, we see Yuki interact with Haruhi.  She helps paint a message on the ground to catch Santa.  As one does.  But it goes back to the Haruhi of old: she wanted an ESPER, an alien and a time traveler.  Now she wants to catch Santa.  (She’s unsure what’s worse: that he’s not real or that he is and she didn’t know it!)

Then this episode does something the first one did not.  It starts showing those moments of friendship.  It’s not about challenges, but simple acts of caring about one another.  Asakura is saddened by Yuki’s lack of self-confidence.  “You’re cute in your own way.”  And she wants to help Yuki, which is sweet, including the moment before the club was allowed to continue.  She tells her, “there’s nothing that I can do that you can’t!” and she prompts her friend to fight to keep what she wants.  But the most heart warming part is when Yuki goes outside and Kyon goes to find her and they have to share a coat.  Sure, they could have gone back inside, but they cuddle up and Yuki observes that while it’s awkward, she’s “never been warmer”.

I’m actually surprised that this happened already because I expected this would take a while to build to.  We seem to have gotten a level of closeness between the two very quickly.  Yuki showed the strength of character to do what had to be done early and she knocked it out of the park, leading to Kyon complimenting her for it.  Yes, the Christmas celebration has come and gone and Kyon already has been closer to Yuki than ever before.  So… what am I missing?  Where do we go from here?  ML

Read next in the Junkyard… Nagato 3: Haruhi Suzumiya!!

Co-writer on junkyard.blog. Author of windowsintohistory.wordpress.com. Editor of frontiersmenhistorian.info
View all posts by Roger Pocock →
This entry was posted in Anime, Entertainment, Reviews, Television and tagged Haruhi Suzumiya, Joy to the World, The Disappearance of Nagato Yuki-Chan. Bookmark the permalink.