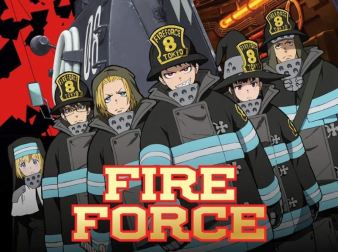 The Junkyard presents a review by Daz of the anime series Fire Force:

Fire Force is set in a world where people spontaneously combust and turn into demon like creatures called “infernals”.  It’s not pleasant and seems totally at random. Not everyone succumbs to this however as some people are born with the ability to control and manipulate fire to their will. These people end up using their abilities in special fire fighting teams to help rid the world of the infernals and to also find the cause of this strange phenomenon.

With that setup I was ready to enjoy this show and for the first few episodes I was sold. We met the main character, Shinra. He’s the victim of a house fire and an infernal killing his mum and taking his baby brother when he was little. He joined the Fire Force to hopefully get near that demon and kill it. There was comedy, there was action and then there came the inevitable ecchi. Not totally unexpected (this is a shonen after all) but it still felt out of place.

So I’m a few episodes deep now and then suddenly at the midway point, I lost all interest. None of what they were doing was of any importance to me. I had found I was stuck with a bunch of characters that don’t really have much point or have any real purpose bar the MC and his captain. The secondary characters were simply there for the comedy and ecchi with very little to no back story either. The only thing that kept me watching were the visuals as well as the sound as they were excellent.

The story felt like it dragged out something that could have been solved a lot sooner. It seems that these brigades have different outfits and levels with lots of infighting that didn’t seem to make sense when the bigger picture is to get to the bottom of this problem. Instead we have to go through these captains of each faction to make them see sense to help the MC and his crew. Sometimes these characters are never seen again and some return when they are needed to fill in the plot. This is following the lazy shonen playbook to perfection and I was seriously bored by it. I’m not a fan of pointless character building and this has it in abundance.

The ending was also a massive let down. It seems that it was a giant set up for season 2. I’ve come across this before with a lot of anime but they seem to only be 12 episodes or so long. I really don’t know why they stretched this out to 24 when the plot is really weak. This show came out at the same point as Demon Slayer so they could have been trying to compete with it but I don’t know. The length wasn’t necessary.

I must say again that the soundtrack, visuals and sound effects were amazing and this was primarily the only reason I kept watching. The flame bursts sound amazing with headphones on and there was a Duel of the Fates type piece of music in the last episode that I enjoyed. It only has the rating it does because of those elements which brings me to my rating for this show.

7/10 is very fair considering its a generic shonen but with exceptional work done on it, just not in the writing department.

Fire Force. You came in with your really catchy OP, your dazzling effects and your amazing sound engineering but fizzled out when it was time to tell a story.   DT

Co-writer on junkyard.blog. Author of windowsintohistory.wordpress.com. Editor of frontiersmenhistorian.info
View all posts by Roger Pocock →
This entry was posted in Anime, Entertainment, Reviews, Television and tagged Fire Force. Bookmark the permalink.