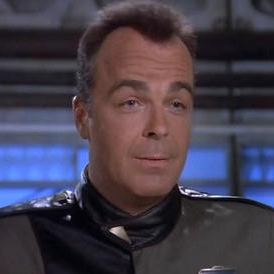 Today is our Mike’s birthday, so I’m going to make the ultimate sacrifice and drag myself away from the world of anime to write something different in his honour. After all, when a man reaches such a grand old age he deserves a bit of recognition, right? So I though it would be fun to focus on one of Mike’s favourite television shows, Babylon 5, and in particular the character who shares his first name: Michael, of the Garibaldi variety.

Comparing our Mike with B5 Mike we can find a lot in common. They are both inspirational team leaders with brilliantly analytical minds, some distant Italian heritage and questionable hair. They both prioritise the important friendships in their lives with great loyalty to those who matter, and either Michael is the man to have in your corner in times of trouble, but both Mikes speak their mind, refuse to walk on eggshells, and will kindly but fairly call somebody out if they get their priorities skewed in life. They don’t suffer fools gladly, and quite right too.

Michael of the Garibaldi variety often deals with that kind of issue with a sarcastic comment or biting remark, and it doesn’t matter about the rank or status of who he is talking to. That makes him what tropers call a “deadpan snarker”. It’s always good to have a character like that in an ensemble show, because it’s a great way to raise issues and challenge assumptions, and to do that with humour. The deadpan snarker is the one who often delivers the comedy lines, but there is a purpose to it, because he will be the one to spot flaws and faults, and often vocalise what the more shrewd amongst the viewers will have spotted. Done right, the deadpan snarker is always an intelligent character, the comedy guy who has a point to make. Let’s look at a few choice examples of some of Garibaldi’s best lines:

Infection: “Don’t sweat it. Just be that charming, effervescent Commander we’ve all come to know and love. What’s the worst that could happen? They fire you, ship you off to the Rim, and I get promoted to Commander. I don’t see a problem here.”

The Long Dark: “You were about to accuse the Centauri ambassador of being in league with the devil, which may not be far from the truth.”

A Race Through Dark Places: “Smooth! You’re getting good at this. Keep working on it, and one of these days I might even be convinced that you’re human.”

Matters of Honor: “And what kind of head of Security would I be if I let people like me know things that I’m not supposed to know?”

Convictions: “May I be the first to say that this is the nuttiest idea you’ve ever had.”

Passing Through Gethsemane: “Nobody’s ever been to the Vorlon Homeworld and back again. Yet she goes, comes back like she just took a trip to the corner store. And now she’s working for Kosh. Is anybody else as creeped out about this as I am?”

Exogenesis: “Ivanova was right. You are a pain in the ass.”

As Ivanova says, “there’s nothing more annoying than Mr Garibaldi when he’s right.” Fortunately that’s not a problem with our own Mike in the Junkyard because he’s rarely right… but when he is he’s a man I’ve learnt a lot from and he has come up with many a line in his articles that made me stop and think and question my own opinions. Happy Birthday, Mike. Have a good one.   RP

Author of windowsintohistory.wordpress.com Co-writer on junkyard.blog Editor of frontiersmenhistorian.info
View all posts by Roger Pocock →
This entry was posted in Babylon 5, Entertainment, Science Fiction, Television and tagged Michael Garibaldi, Tropes. Bookmark the permalink.

4 Responses to Michael the Deadpan Snarker