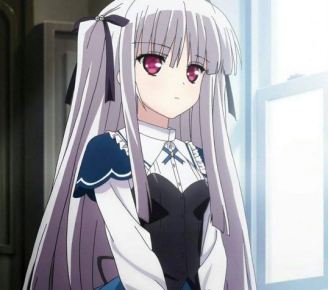 This is one of those anime series that mix super powers with a school setting. They can be a lot of fun. In Absolute Duo the students of Koryo Academy are able to produce weapons from their bodies (don’t think too hard about it) called Blaze, and also have super strength and various other powers. The Academy trains them up to be stronger and more skilled in combat, with a view to using them as peacekeepers once they graduate.

On their first day the students have to go straight into battle, and the losing 50% are out of the Academy straight away, so they have to hit the ground running. It’s a brutal introduction to Academy life, but keep watching because there’s eventually a twist in the tale. The winning students are then put into “duos”, initially completely arbitrarily, with whoever they happen to be sitting next to on their first day, but eventually they will have to select their permanent duo, the student they will work together with throughout their time at the school, and will battle together with as well. This is a big deal, and is sealed with solemn promises of loyalty and protection that don’t sound a million miles away from wedding vows.

The main character is Tor Kokonoe and he brings with him the baggage of a mysterious and tragic past. So does Julie Sigtuna, his duo partner. Yes, we have a mixed gender duo, and duo partners have to live together. Do you get where this is going? Fanservice. Throughout the course of the series at least two other characters fall deeply in love with Tor, so we head rapidly towards harem anime territory, but this is a class above most harem anime series. Firstly, the main character is actually interesting, charismatic, brave and has a strict moral code, and all of that makes him infinitely more likeable than the usual kinds of bland harem anime protagonists. You can understand why girls are falling for him. The fanservice is occasionally gratuitous (at one point Tor wakes up in a tent to find himself being hugged by two naked girls), but that’s rare and most of the time the fanservice is there to emphasise the cuteness of Tor’s duo partner, Julie. She behaves inappropriately towards him immediately, climbing into bed with him (innocently), but this is not just the classic male fantasy fulfilment setup that it would appear to be. Her backstory, with the loss that she has faced, makes sense of what she is doing. She is looking for a protective, safe, father figure, and she is also desperately lonely. I can’t stress enough how brilliant these two main character are. They are mesmerising to watch whenever then are on the screen, not just because the character art is great, but also the strength of their friendship is the key theme of the series. They speak in terms that blurs the lines between friendship and eternal, devoted, loving commitment, but in the end it’s all about the power of two people who are completely committed to standing by each other whatever happens. It’s a beautiful portrayal of a friendship that really matters.

That happens with some of the other characters too, especially mismatched duo Tomoe and Miyabi, whose abilities and confidence are on different levels. The depths to which one of them sinks due to feeling inferior are shocking and a big part of the series, and another example of friendship and unwavering loyalty beating the odds. The other notable duo is another mismatch: a nerdy guy and a muscle-head. They don’t play such a major part in the story, but they are a fun pairing. Then we have Lilith, who travels over from England in the hope of pairing up with Tor. Her powers are a class above everyone else’s, and she recognises that Tor is something special and they would make an incredible team, so that gives Tor the choice between sticking with Julie or forming an amazingly powerful team with Lilith. Then there’s the home room teacher, Rito Tsukimi, who is initially an irritatingly overbearing woman who behaves inappropriately and wears a bunny outfit (a female teacher trying to compete with the students is a harem anime cliché), but soon takes on a very different role in the series. This is an anime that keeps surprising you.

There are plenty of big battles, and towards the end of the series a major enemy to overcome, whose power seems to be beyond the abilities of anyone at the Academy to fight, so there are plenty of twists and turns along the way, but in the end what matters is the exploration of friendship and love, and how that goes wrong and how it goes right. There are only 12 episodes, and that left me wanting a lot more. If you don’t like fanservice and violence you will find Absolute Duo a struggle, but the compelling portrayal of what it means to be a loyal friend makes it essential viewing.   RP