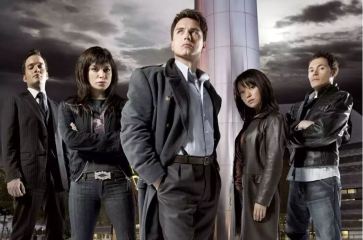 Torchwood continues to evolve and this episode feels like it could have been the start of a far more successful run for the series but it does fall foul of something Star Trek was doing years earlier by being afraid to fully embrace an idea.  And maybe there’s even a Batman moment here, too!  Reset is not actually a reboot to the series; it’s a reference to a drug that will reset the body to “factory conditions” even after having picked up an incurable disease.  HIV, Hepatitis, Diabetes, even Covid-19 would be cured with Reset.  But people are dying and Torchwood has a VIP coming to help solve the case: Martha Jones.

Gotta say, I had utterly forgotten that she was coming back and it was a very happy surprise.  I am glad that the writers decided to take into account the major events  that happened to Martha and Jack prior to this season (in Doctor Who) and they drop enough comments that we do see a cohesive universe; something I thoroughly appreciate.  References to Martha’s family and the Doctor (“Do you miss him?”) help make this episode feel like it’s part of something far bigger than itself.

Overall, we have a really good story about a pharmaceutical firm harvesting alien DNA to help make better products to save mankind, but it goes wrong and the clinical trial subject begin dying as “mayflies” burst out of their dying bodies.  Warped!  Thankfully Torchwood can stop it but not without a number of things going wrong for the episode.  The thing is, you don’t notice them if you just go in with the brain on “watch mode”; you have to actively engage “thinking mode” to notice the flaws and stumbles.

Jack’s propensity for forcing his sexuality into the mix is tiresome.  “I had a boyfriend once whose nostrils flared when he was lying”.  Jack has already made it clear that he’s interested in Ianto (and I love Martha’s glee about hearing about it because she accepts it and is happy for them; important attitudes to be shown because one should be happy for a happy couple!) but how many boyfriends/girlfriends/bugfriends/etc does Jack have to flaunt?   It’s boring, tedious, and been there done that.  We’re not watching the Bachelor of the Rift.  We’re watching a thought-provoking SF show… or at least we think we are!

We get our Batman moment with Chekov’s laser scalpel this week.  1960’s Batman was a show that never had the same tool twice.  Conveniently, Batman always had a tool that turned up for the episode that would vanish completely thereafter.  Torchwood would have done well to have an array of tools made clear from the start even if some had unknown qualities and the writers could have built on them from there.  The laser scalpel does add some fun, like when Owen explodes a cup behind Ianto causing him to scream violently (and me to laugh equally explosively).  But the tool is just one complaint about the setup of this series.  The Weevils were the big monster the series advertised before it came out and they feature so infrequently, they are like Star Trek Voyager‘s Kazon. The Kazon were supposed to be the Klingons of the Delta quadrant and then they were so poorly received that we basically never encountered them beyond season 2.  And that’s not even the worst of it: the rift itself would benefit from logic.  It’s supposed to be a way things are dumped on earth, sure, but how does it work on the other end?  Think of a straw: something coming out on one side has an origin on the other.  But the rift pulls things from everywhere, which means it’s a straw with one end in every cup… and that’s senseless.  What does it do, move around from cup to cup on one end, but the other is stable in Cardiff, of all places??  Things “fall through the rift” is a fun way of saying “we need a way to get aliens to Cardiff but there doesn’t need to be logic behind it!  Logic-schmogic…”

Speaking of logic… when someone is standing in front of you and shoots you in the neck with a tranquilizer dart, one should not have the dart sticking out of the side of their neck, as Martha does.  Also, failing the logic test, Tosh communicates with Martha through contact lenses that allow her to see what’s being typed.  This is to keep any visible tech out of sight of the people she’s investigating.  So why does Jack speak to her at the end, after all the work typing to her?  If she had an earpiece the whole time, why did they have to type anything at all??  And when Martha is saved with the laser scalpel she sits bolt upright.  Her arms were probably broken because we saw that they were strapped to the table; yes the sudden shock may have given her a burst of adrenaline that tore the Velcro, perhaps, but it’s still a poorly thought-out sequence.  (Not to mention the weirdness of Martha climbing out the window expecting something good to come of it!)

And the alien warehouses of the Doctor Who universe are getting crowded.  UNIT was the batch we knew from the classic series and when Torchwood was added to that list, that was fine.  Jack explains that they are more ad hoc while UNIT is a more organized business.  I accept.  But now we learn that The Pharm is also harvesting alien tech.  Come on!  How many other Cardiff-based alien organizations are out there anyway?

The Trek blunder I mentioned was not even the Weevil situation.  In Star Trek Nemesis, (um, 18 year old spoiler coming…) Data is killed off but, oh look, they found a duplicate and Data was downloading his brain into the duplicate.  Lucky.  But it said the writers were not willing to commit to the death.  Now, while the 2020 series Picard made that better, it had all the hallmarks of a cop-out.  In Reset an unexpected thing happens: Owen is shot dead, but oh look, we have another medical officer who just showed up!  The thing with Owen’s death that really bothered me is huge: why didn’t Jack step in knowing a bullet would do very little to him?  Instead, he stands in the background and to my shock and horror, Owen is killed!  Killed, mind you, on his very best episode where he both proves to be a real person and accepts a date with Tosh.  I’m a sap and loved that he finally realized that she was worth the effort.  (Also, a classic Trek maneuver: the guy getting married in the episode is bound to be the only guy to die!  See Balance of Terror for an example!  We will have that episode reviewed on on the Junkyard on August 12th.)

The bottom line is that this is still a strong episode and the addition of Martha is a massive win for the series.  Jack’s stance about fighting exploitation and slavery also makes for a great win for the team, but I have to ask: wasn’t it better to try to find a way to save the aliens in captivity, rather than killing them all?  The Mayfly alone is worth trying to save considering it clearly tries to communicate with Gwen.  So in the end, I’m torn.  I really enjoy this episode, but it has a lot wrong with it.  Of course, it does open a door for some really strong stories for the latter part of this season but we’ll have to see how much logic factors in to those before I make a blanket assessment.  At least it looks like Martha will stick around for a while, so we’re bound to get some positives out of it.  At least, one hopes!   ML

Like Loading...
This entry was posted in Doctor Who, Entertainment, Reviews, Science Fiction, Spinoffs and tagged Torchwood. Bookmark the permalink.