Nagato 4: Be My Valentine 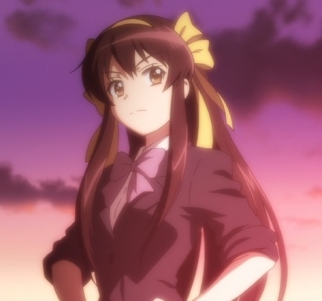 The junkyard presents two articles about the Disappearance of Nagato Yuki-Chan episode Be My Valentine.

Every romantic comedy anime I have ever watched has a Valentine’s Day episode. The tradition in Japan is for the girl to give chocolate to the guy, often home-made, but there is an added level of complexity because Valentine’s chocolate can also be given as a sign of friendship. It’s all in the context. If Yuki makes chocolate for Kyon and nobody else, and has clearly put a huge amount of effort into making it herself and making it special, then her intentions are clear. If she were instead giving it to everyone in the Lit Club it would be a different matter. But as Asakura says, Yuki pours her love into those chocolates. Ironically, while she is doing that, and trying to think of a way to get herself alone with Kyon, he’s having his time monopolised by Haruhi, which is just a bit… melancholy.

At this point Yuki’s spinoff series has been completely crashed by Haruhi. That’s not a criticism, just an observation, but the best part of this episode and indeed every episode so far has been the scenes featuring Haruhi. That’s even true of the first episode when she was on screen for a couple of seconds and it was an electrifying moment. So while all the boring chocolate making and all the angsty stuff is going on with Yuki, Haruhi is actually going about the business of forming a relationship with Kyon.

A look at a contemporary forum gives a very clear indication that nearly everyone watching this on first broadcast wanted Kyon and Haruhi to get together, while feeling a bit sorry for Yuki, so whichever way the series jumps from this point on it’s going to have to (a) fail to deliver on what the viewers want, or (b) undermine the premise of the series. The latter is looking like the lesser of two evils at the moment, because Kyon is clearly perfect for Haruhi. Just look at the artwork for their scenes together at the river – it’s stunningly beautiful. The world bursts into vibrant colour when these two share a moment. There is a subtle callback to the original series when Haruhi asks Kyon if he thinks water imps could be real. The average person would probably say no, but Kyon is open minded:

This is reminiscent of a similar question about aliens, time travellers and ESPers, which prompted the original Haruhi to call those into existence (but not sliders!), but the important thing is Haruhi’s reaction to his reply. It’s palpable, almost as if she has just heard him make a declaration of love. The reason for that is Kyon gives her exactly what she needs from a companion, and something she gets from nobody else. He is positive and life-affirming, refusing to stand in judgement over her weirdness and keeping his mind open, but he is not a sycophant. He treats her like a human and speaks his mind, but he doesn’t do it in a way that undermines her. He gets everything right immediately which it took the original Kyon until the end of the Sigh arc to learn. And that humanises Haruhi much more quickly than she was humanised in the original series. She actually apologises to him when she makes him get freezing cold water in his shoes. “I’m sorry” are not words we are used to from Haruhi, but I genuinely believe she is fundamentally the same person in this parallel universe, despite lacking her god-like powers. It’s just the Kyon and Haruhi have found a shortcut to where they were at the end of the parent series, and they’ve done that simply by spending some time alone, just the two of them. Something clicks into place here, and it’s perfect. 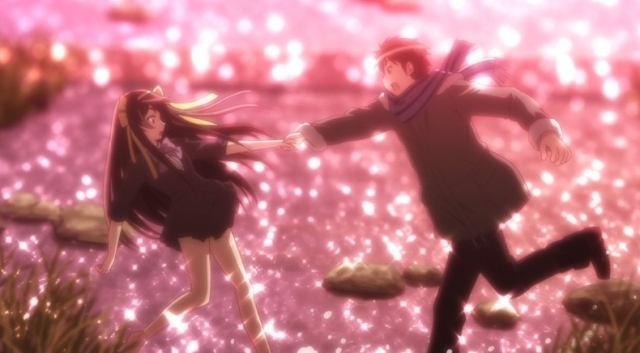 And yet this is still Yuki’s series, so I suspect the chocolate we see Haruhi giving Kyon at the end is simply a gesture of thanks. It looks like something that has come out of a vending machine for a start. One thing’s for sure, if Haruhi did decide to pursue a relationship with Kyon, Yuki has zero change with him, in any universe. She remade the world, and she’s still losing out to Haruhi… so far. But that’s going to be the interesting bit. These are fundamentally the same people, right down to their attractions, feelings, behavioural traits, and emotions, but we are seeing them in a different context. Yuki might have made herself into a human, but she still can’t express her feelings and she is still being pushed into being a background character by Haruhi, the amazing girl who speaks words of pure inspiration without realising it:

“Just because we don’t know where we’re going doesn’t mean we won’t get there.”

We’ll get somewhere with this series, but at the moment it’s tearing itself off in two different directions.   RP

Episode 4 opens like a hyperactive child on speed having just had a gallon of Jolt Cola and being asked to speed through life for no good reason.  Oh, make no mistake, I loved it but boy howdy was it hard to keep up with.  And what’s not to love.  It’s hilarious as a contest is underway to see who can embarrass Yuki or Ms Asahina the most.  The art work gets especially fun as Yuki eventually freezes in a block of ice and the whole thing is just outstanding.  To improve it, little signs appear overhead like “firm protest” that just make the surreal nature of the “battle” even more enjoyable.  Sure, I may not be getting my standard sci-fi mystery that I love, but I accept on account of some very funny comedy.

Well, if I’m thinking about it fairly, the story is not totally devoid of that sci-fi.  In that mix of things, Ms. Asahina’s star shaped tattoo comes up again and like the previous series, she’s not even aware she has it.  (This does lead to yet more hilarity with the line “I see I’m facing off against a master!  I didn’t expect you to know things about Mikuru that she didn’t even know!”)  Trying to spot the similarities is a mini-game on its own and I enjoy that too!  Through this contest, one thing stood out to me: Yuki calls Asakura “mom” when she wakes her up.  If this universe isn’t the same as the one with the Data Entity… where are Yuki’s family?  Why does Asakura come over all the time and, effectively, play the role of mom, waking her up and teaching her how to cook?   To a very large extent, I feel like her absent family is why she is the quiet girl she is.  Who guides her?

I do have to say that the friends provide her with actual friendship and I find myself once again grateful that a show like this exists.  All of Yuki’s friends are behind her; they all want her to succeed to the point where they all conspire with her to allow her time to be with Kyon.  That makes the final shot of the episode that much more painful.  This show may not have the depth of Erased or the horror standards of Another, but it’s sating another need: the need to be uplifted and, maybe a little bit, to be reminded of our youth!  And it’s not just the girls who stand up for one another.  As Kyon continues to find Haruhi strange and somewhat frustrating, he’s quick to help her when she almost falls, joins her in freezing water just to support her and most of all, sees her need to believe in water imps so, rather than shoot her down, he admits he doesn’t know if they exist.  He won’t break her spirit even if he knows the truth is so much more mundane.  (Well, at least on this side of the looking glass!)

Once again Kyon had me laughing the most, but it’s in the typical way that is so terrible to admit: his pain had me experiencing a deep belly laugh when Asakura stabs him in the back with a pen and he actually gets tears in his eyes!  I loved Haruhi’s Dirk Gently-like quote, “Just because we don’t know where we’re going, doesn’t mean we won’t get there!”  It’s so her!  A carefree girl looking for an adventure in the realm of the unusual, going out there to find whatever she can.  Mikuru’s “please deny it” about her fan club is another laugh-out-loud moment made better by the sadistic laughter of her foul fanged friend Tsuruya who absolutely delights in her discomfort.  There’s a sense of meta dialogue when Asakura tells Yuki that she saw Yuki and Mikuru starring at each other “like a scene from a manga”.  And the star of the show, upon hearing this, thinks “it’s kind of creepy how similar their thought processes are!”  But the best scene for Yuki is trying to decide how to interact with Kyon.  As she struggles to come up with the right choice in a question asked by Asakura, the artwork become increasingly funny, until a pop can be heard and we get a distorted digital image.  These characters all offer something and each is intensely likeable.  There’s not a bad one in the bunch.

Speaking of images, I’m amazed that nearly every episode has included a scene that takes my breath away for sheer beauty.  There’s a sense of lazy afternoons in the dreamy days of our past, hanging out with a friend without any plans in mind.  It’s not a big scene but the artwork is just magical as Kyon watches Haruhi as she searches for Water Imps. 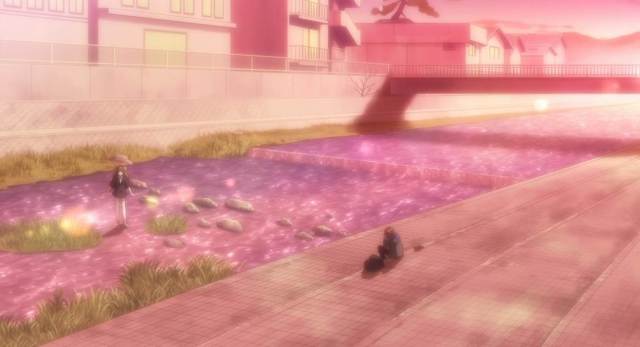 I’m not sure where the show will go, but I’m definitely up for the adventure.  I just hope Yuki isn’t too broken up over walking in to see Kyon accepting chocolate from Haruhi.  Surely, even in this short a time, she must realize that from Haruhi, that could be an act of war as quickly as a term of affection.  I guess I’d better find out…  ML

Read next in the Junkyard… Nagato 5: Her Melancholy

Co-writer on junkyard.blog. Author of windowsintohistory.wordpress.com. Editor of frontiersmenhistorian.info
View all posts by Roger Pocock →
This entry was posted in Anime, Entertainment, Reviews, Television and tagged Be My Valentine, Haruhi Suzumiya, The Disappearance of Nagato Yuki-Chan. Bookmark the permalink.