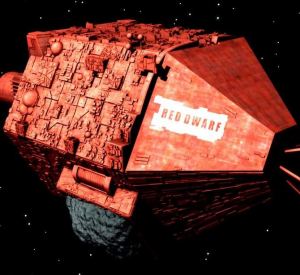 We open with a shot of somebody, perhaps Lister, cleaning the outside of Red Dwarf. As the camera pans away we see the full scale of the ship, and it’s enormous. This is a utilitarian view of the future, with satellite dishes and all kinds of bits and pieces hanging off the ship. It’s not sleek or pretty, but it’s certainly impressive. This one shot, for my money, establishes a level of scale and realism that is missing from spaceship models or CGI shots in most sci-fi series. Considering this is going to be a sitcom in space, that’s impressive.

An enormous amount of information is packed into this first episode, which is a masterclass in world building. Although the main focus of the episode is of course the relationship between Lister and Rimmer, other characters come to life with very little screen time. Mac McDonald is great as the captain, and even Mark Williams as Peterson and CP Grogan as Kochanski are memorable, despite basically having only one scene each. It’s to the credit of everyone involved in this that characters who will be killed off after the first 20 minutes still manage to make an impact. But most importantly, Lister and Rimmer are both great. Their characters are established incredibly efficiently. Lister is a fun-loving slob, who keeps his lighted cigarette in his ear. Rimmer is an insufferable bore, who fails at everything in life and tries to keep up a pretence of superiority. He’s a “smeg head”, an insult coined for Red Dwarf. We are also introduced to Holly, the ship’s computer, who is the funniest thing about this episode, and his “everybody’s dead, Dave” interaction with Lister has quite rightly been remembered as a classic comedy moment, and a catchphrase that occasionally pops up in other shows. The episode even finds time to introduce us to Cat, whose personality is also established efficiently within minutes. So by the end of the episode the premise for the series has been neatly set up: a human slob, a holographic nerd, a computer with a laconic wit, and an egotistical evolved cat. They are all instantly likeable and fun. In retrospect it’s not surprising that people wanted to keep watching these characters for over three decades and counting.

Watching it today, The End is a gloriously 80s view of the future. The rules in the exam are “no modems, no speaking slide rules”, and Lister’s smuggled cat is discovered when Lister sends a photo to be processed in the ship’s lab, but that’s all good fun, and this isn’t exactly a show that’s asking us to suspend disbelief anyway, so this episode has lost nothing in the intervening 33 years. The humour isn’t always laugh-out-loud, but it doesn’t have to be. A couple of good belly laughs in a half-hour sitcom is fine. My personal favourite was the sight of Rimmer being taken out of his exam on a stretcher, drenched in sweat and saying “I think I did quite well.”

So what did this episode have to teach us? Maybe that it’s better to be lucky than to be smart. Out of all the crew, the two survivors (well, sort of), are the two biggest losers on the ship. According to the bible, “blessed are the meek, for they will inherit the Earth”. I have a sneaking suspicion that The End gets us closer to the truth, and that the stupid will probably inherit the Earth instead. At least life will be entertaining. Let’s all pack our modems and talking slide rules. The future’s waiting for us, and it’s going to be funny.   RP

3 Responses to Red Dwarf: The End