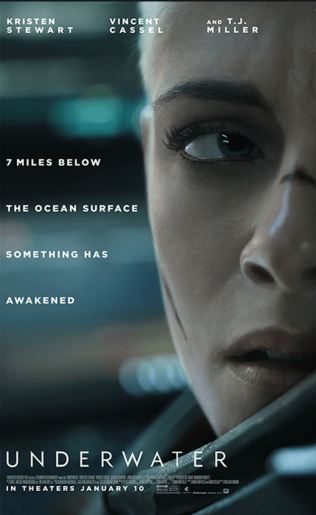 Taking a week off the video games reviews, I thought I’d share another surprise.  I don’t watch many movies during weeknights.  Work takes up a lot of my time and by the evening, I just want to play some PC games.  But a movie caught my eye and I was rapidly realizing after 2 weekends of pushing, that my wife was not going to watch it with me so I knew I had to watch this one on my own and for that, weeknights work best.  95 minutes later, my wife was still sitting next to me when it was over.

Now I should point out too that I had not heard of Underwater.  When I tried to learn a little about it, I saw a cast of what I would consider relative unknowns and Kristen Stewart, who I normally find about as interesting as cardboard.  I had been subjected to 2 of the Twilight movies and still can’t shower vigorously enough to get that out of my body.  She was not an attraction to get me to see this movie, but having nothing more than a feeling about it, I turned it on anyway.  And I admit it: I was very pleasantly surprised.  First, there are not quite unknowns. Vincent Cassel who plays the base captain, I had recently seen in Westworld, HBO’s current flagship series and he can play a great villain.  He’s no villain in this, however, and with only 95 minutes, none of the characters are going to get fleshed out too much, but his briefly-glimpsed backstory does make him a relatable character.  TJ Miller, always known for comedic roles, though I could not name one thing I’d seen him in, even knowing full well that I have seen him before, plays the only sense of humor in the movie. Thankfully, the humor never undercuts the terror the crew experiences and he works well to keep the edge just below the panic level.  Jessica Henwick (Iron Fist’s love interest, Colleen, and one of the Sand sisters in Game of Thrones) is becoming a very recognizable face in genre TV, but I did not recognize her name when I started the movie.  I was pleasantly surprised when I saw her since she always plays interesting characters.  In this, she plays the very relatable “intern” who is struggling with self doubt as she has to endure some truly harrowing experiences.  (She deserves to be on the poster along with Cassel, Miller and Stewart!)

More than anything, I need to give Stewart credit.  Her character is not a landmark performance, but neither was that of Keanu Reeves in The Matrix.  He was a regular guy who experiences some very surreal things.  Similarly, Stewart plays Norah Price, a mechanical engineer thrust into a very bad set of situation as the deep sea base suffers a catastrophic hull breach.  The establishing shot of her (dry) brushing her teeth actually sets her up with few words in monologue before she saves a spider in the sink.  (Clearly not an arachnophobe!)  Within the first 5 minutes, we’ve gotten a feel for the kind of person she is before life on the sea floor goes to hell.  She and her small group of survivors have to make it to safety.  I bought into her character fully.   She’s always fighting against tears, but she gives the impression of a very real person who has just witnessed the death of a lot of her friends.  Henwick’s character is also struggling against a nervous breakdown and I felt I might be right there with her under similar conditions.

With 90 minutes to resolve the conflict, there’s not a lot of time to build character, but the situation is what we’re looking at.  It’s The Poseidon Adventure 5 miles under the ocean.  That means the bulk of the movie is about the dangers of being under water and the claustrophobia is akin to what I felt having seen Descent.  Periodically, I had to look around the room to reassure myself that I was unlikely to drown.  In a recent discussion with friends, we talked about the terror of being under water and how that relates to space and I think this is almost scarier for one simple reason: it’s all around us.  I mean, if I’m being honest, so is space, but this hits closer to home!  I don’t expect to find myself stuck in space ever, whereas I’ve been in, on and under the ocean enough times in my life to appreciate the fear factor involved.  It is, literally, breathtaking.

We learn that earthquakes caused the hull breach  but what caused the earthquakes is what interested me.  As you might imagine, they are the result of something else.  While the crew goes out on the sea floor to reach a safe haven, we start to see things.  Some in the periphery, some back lit by fallen lights.  They look like people, just standing there.  Then we start to see them moving around just in the corner of the eye.  I, a fan of Lovecraftian horrors, was getting excited!  Was it possible??  Did I find a movie based on Lovecraft’s nightmares?  Well, you’ve got me!  Oh, there’s a big threat alright, but it’s far more angry than Cthulhu.  This isn’t the Great Old One who steps on us because he doesn’t notice us!   This is an actively aggressive sea creature that may have been released by the underwater drilling that lead Norah and her crew down to the seabed. 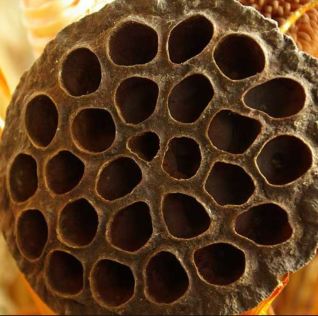 Without wanting to ruin the creature, I will say that the most disturbing part of it is barely visible, but when it is, it affects the viewer on a visceral level.  Trypophobia is a real thing.  It’s a fear or disgust of closely packed holes.  There are tons of very disturbing images of this online, but I’ll go with a simple plant to illustrate the point. Something about this disturbs me and I think it was because I was burned by that lovely orb in the sky we rely on for warmth when I was a kid and had to be wrapped up like a mummy, but I’ll never forget seeing my shoulders with these deep fissures in them.  So yes, I’m bothered by it; not disgusted or fearful.  When the sea creatures emerge from their host, they come out of tons of little holes like this over the creatures enormous body.  Mind you, what comes out is vaguely human sized so that should give you some concept of how big this creature is.

I agree that conceptually this creature does not fit in with normal life on this planet, but that’s why we call this “a movie”.  It’s not meant to be real. It’s a work of fiction that is either going to hold our attention or not.  If this helps, my wife hates underwater things and planned to leave the living room when I started the movie, but it kept her attention the entire time.  (Anecdotally, when I said to my wife upon seeing the creature, “is this going to be Cthulhu?” she said, “if it is, then I hate Cthulhu.”  Sacrilege!)

I confess, this isn’t breaking new ground, and it’s not The Abyss, but it was a very entertaining experience and gave me new appreciation for Stewart as an actress.  I’ll certainly be more open minded to movies with her.  In reality I feel I was unfair to judge her so poorly because of those shiny, glistening vampire movies she did.  And for me, it’s always fun seeing anything even vaguely Lovercraftian on our screens.  Maybe with enough positive thoughts, we’ll still see a movie version of At the Mountains of Madness.  And hey, if Kristen Stewart wants to be a part of it, I would be happy with that too.    ML

Like Loading...
This entry was posted in Entertainment, Movies, Reviews, Science Fiction and tagged Underwater. Bookmark the permalink.