This is one of those weird episodes that are all about backstory for a storyline that feels like it was wrapped up long ago but when looked at carefully, that may not be the case.  The only B-plot going on is that Sheridan sends Marcus and Franklin off on a mission to Mars to work against Clark’s propaganda machine.  “We’re going to have to start going against him sooner than we thought.”   Everything else about this episode is dedicated to Delenn.   There are a few funny moments that need to be addressed first however.  Zack is uncomfortable with his new attire, not unlike what happened to him with his Earthforce uniform back in season 3.  This leads to him getting poked by a Minbari and Lennier “disciplining” that Minbari, rather comically.  G’Kar is getting a new eye and upon learning that it can come out and be used like a camera, he gives a mischievous “Interesting… very interesting.”  (He even steals that scene!)   Susan staggers drunkenly out of an elevator with a Drazi on the ground behind her, to Sheridan’s surprise.  While she says nothing about it, it did not escape my eye that she’s wearing a green sash.  (This image might be too small to see, but trust me, it’s there!)   This probably has something to do with the Drazi leadership going to whomever is wearing the correct colored sash that we first learned about in Season 2’s The Geometry of Shadows.  And the final scene of the episode has Marcus singing, which is actually improved post credits when Stephen lets out an absolutely hilarious scream! 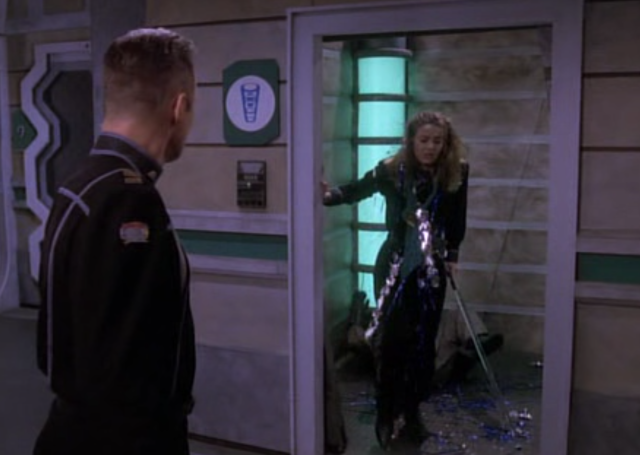 At this point, we have to focus on Delenn.  This seems as good a time as any to wrap up the story of the war but it does feel a bit like JMS just needed a filler episode.  But, as I said above, if you take the events of the previous episode into account, we realize that’s there is a logical placement with this story.  Let’s face it, ISN broadcasts everywhere and the Minbari are probably no less aware of the negative reaction Sheridan is getting from his own people.  He alone may be the reason relationships with Earth will suffer.   Earth wants to get rid of him using any means necessary and it probably wouldn’t be great for the Minbari leadership if one of their highest ranking people, the leader of the Rangers, is associated with Sheridan.  So they contrive a means of getting her back to Minbar to discredit her and make her move away from John.  If she chooses to be with him for the right reasons, they can allow it, but the chances are they will prove Delenn is doing this for the wrong reasons and be forced to give up her place at John’s side.  They use magic to find out: a strange VR trip using a hallucinogens and time travel!  (To be honest, the dreaming is one of the few senseless things I found in B5.  Is it a place?  A shared memory using some drugs? Who knows.   This is one of the very few times Babylon 5 asks us to accept something on blind faith, but perhaps that’s apt for a Minbari-centric episode.)

The problem with the whole gambit is that the idea is flawed, namely in that Callenn knew the truth might come out.  Maybe he gambled figuring the odds were low, but when the truth emerges, it’s hard for the Minbari to cope.  Culleen is desperate that the truth remain buried.  A lie might be against Minbari culture but omission, or lying to save face for another… those are acceptable options.   This becomes interesting with a lot of the lore laid out.  We knew the Triluminary device was a strange thing handed down by Valen, who himself (being Jeffrey Sinclair) gets it from the future.  This device has neither beginning nor end, but now we see how things tie in.  It also hints at something for the future.  Delenn is a child of Valen.  Valen was “Minbari not born of Minbari”.  After the war, Valen had children that were of human/Minbari genes.  Eventually Delenn comes along.  As the pieces start to come together, the symmetry is quite impressive.  It gives new meaning to a story she shared about a mysterious man coming to her as a child and saying he could not allow one of his little ones to be upset.  Was that one of Valen’s children?  Considering the body of Valen was never found, is that because he was still alive when she was a child?  Perhaps we will never know.  But it does mean something else: the Three Who are One, “as you are… The One”, as Zathras said now takes on a whole new meaning.  Valen is a grandfather to Delenn; both are the One.  Sheridan is also The One: the One Who Will Be.  What does that mean of the child that we know Delenn and John will have together one day?  Makes me wonder, certainly!  At any rate, the racial impurity is too much to bear and Cullenn offers a “third option” to appease both sides.   (We are lead to believe Delenn takes it, but there’s no proof of that.  Perhaps we’ll find out.)

As for Delenn, we discover something that makes her family history very sad.  After the death of Dukhat, their greatest leader, Delenn orders the kill command against the humans over what is essentially a misunderstanding.  “No mercy… no mercy… no mercy…”  She is responsible for ordering the death of millions.  Now, that on its own would be a tough burden to carry, but didn’t Delenn once say her father committed suicide over the war, so distraught was he to see the murder of so many innocents?  (The answer is yes, she did say it, but I can’t recall when.  I’m positive it was a fairly recent episode, but I don’t see it in my notes, damn it!)   We also discover that the line she shared with Lennier back when they first met at the start of season 1 comes from Dukhat.  Delenn told Lennier, “I cannot have an aide who will not look up. You will be forever walking into things.”  Hearing that again was a nice touch.  She learned a lot from her teacher.  (Speaking of thing we see or hear again, seeing Delenn as a full Minbari was shocking!  I’d forgotten how much she changed!)   And let’s not leave out an observation about Lennier: his loyalty is beautiful, but how much of that is actual loyalty and how much is love.  He loves Delenn and that’s evident; he had even confessed it to Marcus.  But is it healthy?  And is it going to be a problem for John and Delenn one day?

This episode still felt like filler because I’m waiting for Sheridan to do something about Clark, but it had to happen sooner or later and the timing makes sense.  Now with that out of the way, maybe we’ll see what can be done about the madman in power back on earth.  ML

“You will tell us why you should be allowed to continue on the path you have chosen.”

Oh dear. The post-war anticlimax to Season Four of Babylon 5 has now become so bad that this feels like watching a Season One episode. It really is incredibly tedious and irritating to watch. The main story is Delenn heading off to Minbar to be subjected to the judgement of her clan, who aren’t keen on the idea of her marrying Sheridan.

“I will abide by the decision of my clan.”

One problem I have always had with B5 is the way JMS chooses to depict advanced civilisations. The Minbari are a largely peaceful, enlightened and powerful space-faring race, and yet they are xenophobic, insular, inimical to change, and seem to lack what we would consider the basic rights of the individual. I’m struggling to see how it would be possible for that to happen. Societies that oppress individuals and pigeon-hole them in any way are rarely capable of such progress.

“If I say I love him, is that not enough?”
“No, you must convince us on other grounds.”

Don’t they have phrases that end in “off” on Minbar? There’s plenty of choice of words Delenn could put in front of that which would be appropriate for the situation. Instead she does what she’s told like a puppy dog and drinks her cup of dry ice. This leads to protracted flashback sequences.

Another thing that annoys me about JMS is he just doesn’t get to the point. Last week we had 20 minutes of a news report, with no useful revelation at the end of it other than the capture or murder of Sheridan’s family. The same could have been achieved in a minute or two of screen time. This episode has a similar problem. The flashbacks lead to one very simple revelation: Delenn had the casting vote that started the Earth/Minbari war. This is interesting, but doesn’t justify the viewer’s struggles to stay awake through all the sci-fi cliché tedium that leads us to that point eventually, and leads us to it through a whole load of dry ice.

Then it’s the silly spotlights again in the Grey Council, and this interesting perspective on the human race:

Primitive, eh? Well how about this: we have light bulbs that can light a whole room! Oh yes, and we also have hoodies with hoods that don’t cover the whole face, so you can see where you’re going. Once again I was left puzzled as to how they find their way out of a dark room with hoods over their faces.

In the end, Delenn is allowed to get married, and this will be sold to the clan by referring to a custom of the victorious side in a war giving a female to a losing clan.

“I can explain this to our people as a similar offering to the humans who died during our war.”

Really? They will think that’s OK, will they, to give a woman as a present? So this whole storyline got on my nerves from beginning to end, but thankfully there were a few distractions. G’Kar getting his new eye was a lot of fun:

“It is not my proper colour!”

His joy at being able to remove the eye and see himself with it was a classic G’Kar moment, and his mind is clearly racing with the possibilities. It’s amusing, but if he has plans for it, how is it any different to using a spy camera? It would be a bit silly of him to use it in that way, when a spy camera would be a lot cheaper and easier to replace, and wouldn’t leave an empty hole in his head.

Things were also set up this week for Franklin and Marcus’s mission to Mars, although it’s hard to believe anyone from B5 could actually get there. Unusually, Marcus’s singing was substituted for the closing music. All I can say about that is don’t give up the day job.   RP

Co-writer on junkyard.blog. Author of windowsintohistory.wordpress.com. Editor of frontiersmenhistorian.info
View all posts by Roger Pocock →
This entry was posted in Babylon 5, Television and tagged Atonement. Bookmark the permalink.