This was another impulse buy at a reasonable price in a second hand DVD shop. It’s not the kind of anime I normally watch very much, as swords and sorcery isn’t really my thing, but I sometimes get these in the hope of some deeper themes or meaningful character interactions. I was rewarded with those in The Sacred Blacksmith, but it took a while to get there.

Unusually for this kind of series, our main viewpoint character is female. The “sacred blacksmith” is a very important character as well, but the story really revolves around Cecily Campbell, at least for the majority of the series. She is a knight who protects the city, and she’s an interesting character because for most of the series she’s not actually very good at her job. Although her boss seems to think she is incredibly skilful, I never quite figured out why, because we don’t see much evidence of that, and it instead looks as if she holds her position among the knights because of who her father and grandfather were. The first part of the series deals with her failings, and in particular her inability to strike a killing blow, even when it’s a mercy killing, so that’s an interesting topic straight away, and makes Cecily and others question what business she has being a knight.

She ends up teaming up with a “demon sword” called Aria, a sword that can take the form of a human being. I never quite managed to get past the silliness of that idea, and she didn’t really make much impression on me anyway. Cecily’s love interest is a skilled blacksmith and swordsman called Luke Ainsworth. I struggled to warm to him because he’s one of those grumpy heroic types who really isn’t very nice to the girl showing an interest in him. On a superficial level he’s also not particularly nice to the young girl he looks after, Lisa. I can’t really say much about her without spoiling a major plot development, which the second half of the series revolves around, but she’s a great character and by far the most interesting and best of the bunch. Lisa is totally devoted to Luke and he is also devoted to her in a way that I can’t quite pin down. The closest comparison I can make is a father looking after an adopted daughter, although a big brother would fit as well. It blurs the lines a bit, but the key point is that he is dedicated to looking after her and protecting her, and in turn all she wants from life is to be with him and work with him. It’s not at all creepy either. This is not a love triangle, and it is refreshing how Lisa at no point ever poses a threat to Cecily in her quest to win Luke’s heart. This is good stuff, never going down the obvious, lazy routes. 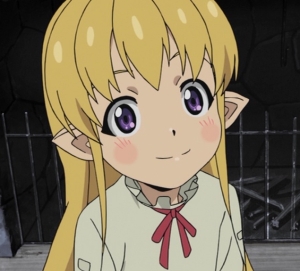 Luke is a good protector to Lisa but makes no real effort beyond that on an emotional level, and to his credit he eventually starts questioning whether he is doing enough. In one lovely episode, refreshingly slice-of-life in comparison with the rest of the series, he goes shopping with Lisa to buy her some new clothes. She is overwhelmed with joy, but it does feel uncomfortably like she is being thrown a few crumbs of affection. That’s what makes Luke such a frustrating character so much of the time. You just want him to stop being such a grump. It all makes sense in the end, and both Lisa and Luke do question the nature of their relationship and whether they are doing the right thing by each other. Ultimately this was the more interesting of the character interactions, with the outcome of Cecily’s apparently unrequited love instead left for the manga to tackle.

The battle scenes made me yawn, but that’s more about my viewing preferences than the quality of the anime, and predictably the final episode is given over to a big, spectacular conflict, so the highlight of the series for me was the run of episodes leading up to the finale that focused on the relationship much more. With a tight focus on three characters (I’m not counting Aria, sorry), this series gave me exactly the kind of meaningful interactions I was hoping for. It just needed a bit of patience to get there.  RP

The Sacred Blacksmith was first broadcast in 2009. There is one series of 12 episodes, approximately 25 minutes each. A dub version is available.

Co-writer on junkyard.blog. Author of windowsintohistory.wordpress.com. Editor of frontiersmenhistorian.info
View all posts by Roger Pocock →
This entry was posted in Anime, Entertainment, Reviews, Television and tagged Fantasy, Romance, The Sacred Blacksmith. Bookmark the permalink.

2 Responses to The Sacred Blacksmith