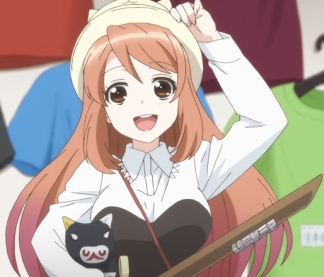 The junkyard presents two articles about the Disappearance of Nagato Yuki-Chan episode Wish.

The references to The Melancholy of Haruhi Suzumiya are coming thick and fast now, with the Not-SOS Brigade visiting a very familiar restaurant and having some very familiar drinks, before heading off to have fun together on a trip. Kyon is of course the last person to arrive, and has to pay a penalty. These are moments that really reward the fans, and it’s impossible not to think of the Endless Eight when Haruhi says this:

“Take summer homework for example. You end up dreading it over the whole of your summer vacation which totally ruins your fun. However, take care of it first and the problem’s solved.”

Amazingly she has written detailed reports on the trip for everyone, and has done that before they leave. Let’s just stop and think about that for a moment, because it really is an incredible thing to do. The work involvement for writing all those different reports must be huge. Of course, Haruhi is amazing and it’s far less effort for her than it would be for most people; it really stresses how remarkable she is, in any parallel universe and even without her godlike powers. But more importantly, she could have just written hers and bossed everyone else into writing theirs. They are going on a nice trip after all, so it wouldn’t have been especially unreasonable, but although it is hugely underplayed she wanted to do this for them all. This makes the point about what a nice person she is underneath all the noise and confidence, but more importantly it reinforces something that was mentioned last week: Haruhi has never been happier. She has found her niche in the world, the only place she really fits. She wanted to do something nice for her friends. Perhaps that’s the most important lesson this series has for us: everyone, no matter how individual, has a place where they belong. It’s just a matter of finding it.

The rest of the episode is just the sort of school club excursion stuff you will find in many a slice-of-life anime, nothing particularly original, but an excuse to enjoy seeing much-loved characters in a different setting. They are having fun, so we have fun watching them. It’s as simple as that. The group dynamics are still developing, and this series is setting itself apart from its parent series in a few ways. Koizumi and Mikuru are both lacking their original powers, no longer an ESPer and a time traveller, so they are superficially purposeless characters. They are the two that the writer will most struggle to find anything useful to do with, from the original main five. It’s pretty obvious by now that Koizumi has simply become a comedy character and nothing more, and when he photographs Haruhi and Asakura struggling with each other at the shrine he seems to have taken over the role Kyon had when he was doing the camerawork for the Sigh arc: the pervert of the group. Then again, Koizumi does have competition for that role: Kyon has already snuggled into two sets of boobs. With the love triangle between Kyon, Yuki and Haruhi, the obvious thing to do with Mikuru would be to make her another rival for Kyon’s affections, and it is to the credit of the writer that Mikuru doesn’t fall into that obvious role this week. It could have so easily happened with Kyon sat beside her for the journey, but instead the focus is on Yuki’s feelings. Later in the episode, Mikuru is the perceptive one, offering Yuki a matchmaking amulet. She has figured out what is going on, and she is on Team Yuki. It’s a lovely moment, and shows that Mikuru is far more than just another pointless moeblob.

Of course it goes without saying that Haruhi is enormously fun to watch throughout the episode, but I particularly enjoyed the closing few minutes, with her sticking her head out of the taxi window like a dog, and then asking “aren’t we there yet?” like a complaining child on a long journey. That’s our Haruhi. They are on their way to the hot springs, so anyone who has watched a few high school anime series will know what’s coming next. Yes, it’s the communal bathing episode. Brace yourselves…   RP

Oh, damn it!  After last episode I was hoping more would happen here.  Wish opens with Haruhi putting together a trip for the literary club but to take the burden off of everyone, she’s pre-written each of their journals so they can stay focused on actually having fun.  So, here I am actually thinking they are going to get to their destination in this episode but instead we get the trip prior to their destination.  This entails seeing the sights and eating copious amounts of food.

I find I relate to a number of the characters in this story.  Yuki has exactly my attitude when at street fairs: try all the food!  I love it.  Probably either killing me slowly or building a really strong immune system, but I love that stuff.  There’s so much to try!  Asakura buys antibacterial wipes (timely!) and I can relate to that because even prior to our scary outbreak of Corona, I tend to be a bit of a germaphobe.  Haruhi has “so much energy” and I am often picked on for that myself.  And then there’s the side of my personality that goes back to my childhood… every so often you may notice that I comment on an old cartoon called The Herculoids.  One of my oldest friends says that for some reason, he can’t see Gleep or Gloop and not think of me.  I’m fairly sure he’s mocking me, but I totally love those characters.  So it seems when people feel silly in this series, they view themselves as creatures very much the same as Gleep and Gloop.  And I both love it, and roar with laughter every time.  Like, deeply laughing each time!

Don’t get me wrong, I don’t really think of myself as an amorphous blob capable of withstanding the most extreme onslaught only to go bouncing away happily – talk about double-sided compliments huh? – but the imagery is magnificent and I can’t help but enjoy so much about these characters.  “These” applies both to Gleep and Gloop, but specifically in context, to the characters in this series.  The dialogue is marvelous, especially between Asakura and Haruhi but you’ve got to keep up.  As they are rattling off lines at 90 miles per second, squared, Haruhi makes such comments as “just sounds like foreshadowing” and “isn’t that just called stalking?”

Then we get some of the bleed-through from the parent universe when Kyon is late to the station and has to treat everyone to coffee and drinks.  This was always the case in the original but that was always overshadowed by the godhood of Haruhi.  As a regular girl, albeit an overly sprightly one, it’s easier to just focus on the humor of that situation.  Speaking of Kyon, he apparently found “power points” interesting, which I would have agreed with wholeheartedly.  His comment, “how many hits in the vital points until you die??” is met with a stare from both Haruhi and Koizumi and then they move on as if he hadn’t spoken.  (Been there too many times to tell you about.  Usually my wife reacts like that for most things I say!)

But the moment that won me over for these guys was the moment Ms. Asahina suggested that Yuki buy an amulet while no one was looking, then offered to close her eyes so even she wouldn’t see.  There was something so wonderfully kind and loving in her face and Yuki’s awareness of it leads her to a less self-serving wish in the end.  She realizes that she has a very special relationship with her friends and makes a wish that they remain together for a long time.  If only she knew about the Endless 8… she might change her wish!  (“Godspeed!”)

For the most part, I was left wanting with this story, because I wanted more than Haruhi inhaling smoke for power, and the group stopping for every bit of food that served no other purpose than to make me desperately crave ice cream, but that doesn’t mean I didn’t enjoy the episode for the lighthearted romp it was.  I did.  I just wanted them to get to their destination.  I think I might be more of a destination guy, not the journey.  (Though that sounds like I’m seeking death; I am not!)  The only thing I will say that really stood out to me was a single scene in the animation.  It’s brilliant because we have to remember this is a bit of a love story between Yuki and Kyon but it also features young kids.  So how do you handle that if you want them to kiss, even in a dream sequence?  Just as they lean in, go to their shadows, then just before their shadow-mouths touch, have a petal from a plant (undoubtedly cherry blossom) land right where their mouths would connect.   Genius artistic rendering! 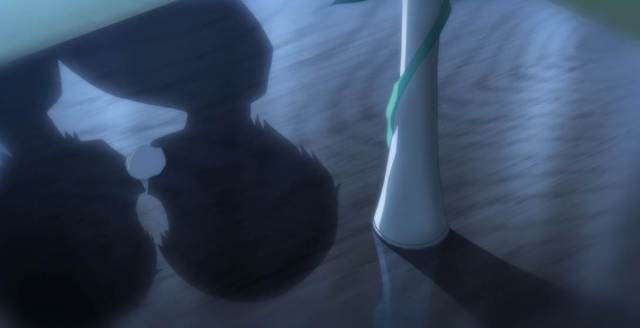 Well, I’ll tell you this for free: being a destination sort of fellow, I guess I’ll keep going because more than anything I want to see where the group will end up.  I can see already there’s no sci-fi coming my way, but I can still hope for some fun.  And maybe these two will actually get together.  I’ll find out, but at this rate, it might be a bit before I do…   ML

Read next in the Junkyard… Nagato 8: A Plot by Haruhi Suzumiya

Author of windowsintohistory.wordpress.com Co-writer on junkyard.blog Editor of frontiersmenhistorian.info
View all posts by Roger Pocock →
This entry was posted in Anime, Entertainment, Reviews, Television and tagged Haruhi Suzumiya, The Disappearance of Nagato Yuki-Chan, Wish. Bookmark the permalink.