Nagato 8: A Plot by Haruhi Suzumiya 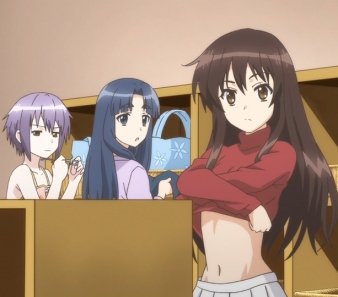 The junkyard presents two articles about the Disappearance of Nagato Yuki-Chan episode A Plot by Haruhi Suzumiya.

And that was nothing like it. There is little to recommend this episode apart from the fanservice if you enjoy that. If not, there’s the comedy, which is variable, and the game of spot-the-Haruhi-reference for the observant fans. Those who watch with sub rather than dub will spot the Endless Eight reference in the Lit Club’s 15,498th ping pong meet, and the karaoke is also an Endless Eight activity. Mikuru isn’t the best singer in the world on either the sub or the dub. Kyon’s enthusiasm is funny, playing to an audience of one cleaner in the end (she seemed to be into it). The best reference to the original series though is Arakawa. I spotted him straight away driving the taxi, and then he popped up again as the chef. When Kyon mentioned that, he said he does both jobs, so basically he’s the Haruhi-universe version of Miss Rabbit. And if you get that reference you probably have a five-year-old and you’re probably British. There’s nothing wrong with playing to a niche audience, though.

But I doubt the audience for the fanservice shenanigans in this episode is niche, because the kinds of things that happen here are repeated across many, many anime series. While some viewers will likely grimace at the “boing” sound effect accompanying Mikuru’s bouncy boobs, this sort of thing has become so ingrained in anime that it’s almost obligatory and it’s to the credit of the original Haruhi series that they had enough story that they never needed to fill an episode with getting the characters naked like this. And here we have all the old tricks: bubbles that fall away from every area of the body except three small regions; hair that falls in two perfect strands, strategically placed; the camera angle placing something at the forefront of the frame to cover somebody’s modesty in the background (just). Most of it is relatively harmless fun, but the abuse of Mikuru is a bit hard to watch (well, listen to mainly, thankfully).

“I always knew they were big but without clothes they’re just epic.”

When they all started squeezing I was expecting the sensible and formidable mother figure of the group, Asakura, to be the one who would call a halt to it and bring some sanity to proceedings…

“I wonder if I should try squeezing them too.”

… or maybe not. Where the episode did surprise me is the extent to which it went down the yaoi route, and with only two regular male characters, that’s no mean feat, especially as one of them is caught in a love triangle with two girls and the other is in love with Haruhi.

“Your skin’s smoother than I thought.”

Maybe Koizumi is so frustrated at Haruhi’s lack of interest in him that he’s going with the maxim “any port in a storm”. You could see why he would be frustrated. I mean, he gets into a bath in front of the whole group and not one of them is in the remotest bit interested in that. Actually, that’s one area of the episode where the comedy really works brilliantly. Koizumi is very funny this week.

“We’re all friends here. There’s no need to be shy.”

…and a little creepy too. As a character study this episode offers slim pickings, but Haruhi is always interesting. She retains her original characteristic of having no thought for modesty. Fun comes first:

“What’s up with this window? Don’t they make them any bigger?” 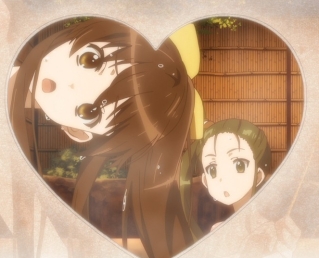 This is also an episode that rewards careful attention from the viewer. No, not for that reason – mind out of the gutter please. Readers with long memories might remember that I discussed in some detail Haruhi’s mind-reading abilities in the original series, something that was very easy to miss but was absolutely deliberate and also present in the manga. This week she seems to be able to hear Asakura’s thoughts without realising what she is doing (and she never realised what she was doing with Kyon in the original series either), so that’s something to keep an eye on. Then again, it might just be another throwaway reference for the fans – it’s hard to tell with this series.

This must be a very hard episode to watch for viewers who don’t either (a) love fanservice, or (b) love slice-of-life. Watching people eat isn’t exactly what you would call a plot, let’s face it. But if you don’t fall into either of those categories, stick with it. This series will drag itself out of its slice-of-life rut and you will want to be there when it does. Not that there’s anything wrong with slice-of-life, but it just doesn’t suit these characters especially well, particularly Haruhi. Other series do this kind of stuff a million times better. Hang in there… RP

Aging changes us.  I imagine that old man yelling “get off my lawn” may have once liked having kids around.  The man he was is not the man he is.  And I know sex sells.  I have no issues with that.  But maybe being a father has its drawbacks.  Not that I’d change it for the world.  But I bring this up because I’ve been pretty tame with The Disappearance of Yuki Nagato.  When I watched the parent series, quite a bit bothered me.  But I then watched Elfen Lied and that put Haruhi to shame for it’s nudity and sex.  The thing was, it was never about the sex.  It was about a being of such power that she could use even a garment of clothing to kill.  So by the time I got to Yuki, I had been mellowed.  The characters were great and I really took to them all.  The humor: outstanding.  But here’s the thing: I feel like I was tricked.  I got into the characters and saw them as animated versions of friends; people who I could see hanging out with.  They are fun to be around…

With some clever placement akin to Remote Island Syndrome, it’s no longer Koizumi that has the wealthy family.  In this universe it’s Tsuruya.  There is a chef who is also a driver.  Her family owns a really great resort.  Having the Lit club go there was natural and had this been the parallel universe, a mystery would have emerged.  Perhaps at the heart of this story we discover the difference between the two series:  Haruhi was a mystery, Yuki is a love story.  And in that love story, through no planning of their own, unlike the Valentine’s Day caper, Yuki and Kyon will end up at the baths together.  It’s a perfect setup to move to the next part of the story.  … And the writers don’t use it.  Instead they do something else.

Oh, yes, we get a lot of good fun.  Whether Haruhi is slamming open a door in her typical overly-enthusiastic style or Kyon is left singing to an empty room, I was laughing.  Asakura still makes me laugh with her smiley anxiety; a double sided emotion that’s totally out of sync with what one would expect. “I have a bad feeling about that,” she says through nervous laughter.  Or that suck-up Koizumi (who never struck me as nearly the suck-up he is here) with his strange behavior around Kyon.  “Don’t sit so close either!”  The whole closeness thing between Koizumi and Kyon in the original series always made me laugh and it still holds up.  And Mikuru is adorable.  She’s clearly meant to be the prettiest, but is always shy and lacking in self confidence.  Even Tsuruya is fun as she manages to keep up with Haruhi.  I really love the characters.

And I also have to credit the cleverness of the writing where Yuki was concerned during the tournaments.  We see a “freeze frame” image of the ping pong battle but don’t know who won.  We have to be attentive to the fact that Yuki drank so much milk that she doesn’t know if she can eat.  (Well done, writer!  So she was the winner of all the contests?  Is she the god of this world?  Oh, yes she is, in fact!  She created this world from the other, didn’t she?)

So the literary club was out to “conquer the world”, and with these characters and all I said, why did I start off sounding like I was putting it down?

Because I had forgotten something.  I was tricked into thinking of them as friends.  And my friends are adults.  The writers did that well; they took me into the characters and made them animated versions of “my friends”.  So when Haruhi stands up from her bath and is seen full on in all her physical glory, protected only by some well placed suds and the benefits of long hair, I felt like Howard Stern saying a playfully gleeful: “hey, now!”  And almost instantly upon realizing it, wanted to turn it off.  I remembered that these “friends” are teenagers, not my age!  Do you know,  I took two days to write this review without going back to the show because I was angry?  The thing is, my son has friends this age.  Never once have I thought “hey now” with them!  Nope!  Not once!  (They are, thankfully, not animated where age is somewhat more ambiguous, so there is that!)

To compound matters, it doesn’t even lead to Yuki and Kyon being together.  It’s completely a fan service episode.  And a fan service episode is probably alright because sex sells.  But the creators of this show should have made these kids college age, because that has the benefit of adulthood.  Then if you want to trick me, at least I don’t feel the way I did here.  Maybe in 2 years, when my son’s female friends at that age, I’ll feel differently again.  But I can’t help but wonder: do these artists and writers have children, and if they do, what are their ages?  Because I don’t see it coming to pass that I will be able to look at these characters the same for a while.  Maybe when I settle down to the next episode, I’ll have mellowed.  Age sometimes does that to us too…  ML

Read next in the Junkyard… Nagato 9: Give Me Your Hand…

Co-writer on junkyard.blog. Author of windowsintohistory.wordpress.com. Editor of frontiersmenhistorian.info
View all posts by Roger Pocock →
This entry was posted in Anime, Entertainment, Reviews, Television and tagged A Plot by Haruhi Suzumiya, Haruhi Suzumiya, The Disappearance of Nagato Yuki-Chan. Bookmark the permalink.

1 Response to Nagato 8: A Plot by Haruhi Suzumiya