The Disappearance of Nagato Yuki-chan III 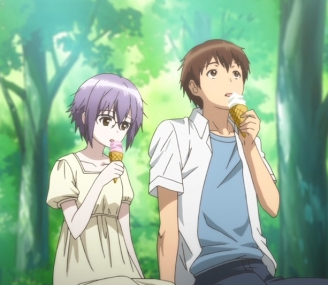 The previous couple of episodes in this arc tried my patience a little on second viewing, but the finale was every bit as good as I remembered it.

Nagato’s post-amnesia personality is going to disappear soon, and she wants to make the most of her last couple of days. The focus of this episode remains tightly on the core three characters throughout, with only the three voice actors needed. Nagato, Kyon and Asakura go to a used book festival, which is ironically a perfect activity for the Literature Club. It takes a bout of amnesia for Nagato’s club to actually find a purpose beyond a social gathering, and an enthusiasm for the subject they are supposed to be interested in. They look ahead to the summer break, with the ominous prospect of Endless Eight activities looming ahead, but that will be something for another Nagato to experience.

“It’s like the world is disappearing, and soon I’ll disappear too.”

But before it disappears, it gets really, really beautiful. This series has overwhelmingly been set against a background of bleak, wintery colours, or incessant rain for this arc in particular, but for the first time we have warm summer colours, appropriate for an episode that attempts to celebrate what Nagato has become before her new persona gently passes from the series. I don’t think I’ve mentioned this before, but this series was animated by Satelight, and they had a near-impossible act to follow after the stunning work from Kyoto Animation on the original Haruhi series. The new character designs might not have delighted the fans, but the background art here is gorgeous, and the direction inspired, particularly the final sequence with Kyon trying to get to Nagato before she fades away.

And what a moment that is: Nagato confessing her love, knowing she will never get to hear his answer, and actually not wanting his answer (“either response would just leave me with regrets”), the music building as Kyon cycles madly towards her, screaming out his frustration at the world because he knows he isn’t going to get there in time.

Then we have the gentle tragedy of a sleeping Nagato, and the moment any devoted fan of the world of Haruhi must surely shed a tear… the bookmark. Kyon’s link to Nagato, the thing that brought them back together in The Disappearance of Haruhi Suzumiya, as white as Snow. This time the connection between the two of them really is broken forever.

But in her place sits gentle, embarrassed, puzzled Yuki, looking up shyly at the boy she loves, unaware that he understands her feelings now. Her reaction is impossibly cute (brilliant animation again), and the genius of that moment is that the animators managed to make it bittersweet rather than just bitter. It’s actually nice to have our Yuki back, but we are going to miss the quiet, bookish girl who took her place, and gradually learned about her love for Kyon.

When this series started as a silly little slice-of-life rom com, I don’t think anyone was expecting an arc like this to play out. Sometimes life really is full of surprises. RP

It is rare indeed that a show will make me do a 180.  I can typically tell the shows I will like and rarely do I ever lose interest.  It’s not that it hasn’t ever happened, but it’s not often.  Sometimes, I give a show a shot without being fully convinced and sometimes I appreciate it and sometimes (Manifest) I realize the story can’t go anywhere and so, I bail.  Some episodes ago, The Disappearance of Nagato Yuki-chan derailed me.  I was in the “like” phase of a series, and seeing as it wasn’t a heavy commitment, I stuck with it until it jarred me.  As I set my sights on completing it, my attention was slowly drawn back when we got into the Disappearance arc.  But even then, the first episode felt self-important in a way that it couldn’t maintain.  Episode two of the arc was where I felt it abandoned self-importance and actually became important.  Then I watched episode 3.

I haven’t been this turned around since the 90’s.  I’m referring to my favorite SF show: Babylon 5.  When I first saw it, 6 episodes in, I bailed.  Years later, I picked it up again and that was all she wrote!  Now, I don’t equate the two series in most regards but one thing B5 did was give us a proper love-letter finale that just felt perfect.  While little happens in the episode, it’s a goodbye and it feels like the writers and characters were signing off rather beautifully.  It’s melancholy and poignant but because we are reviewing that elsewhere, I won’t get too misty-eyed here.  But the final episode of the Disappearance arc has a lot in common with the finale of B5.  It’s a love-letter goodbye to a character who appeared in our world for a few days and it’s lovingly depicted.

Yeah, I was misled at the end of the previous episode, thinking our Yuki would be back at the start of the final part, but that misdirection was the right thing to do.  If Amnesia-Yuki vanished between episodes, it wouldn’t have had the right impact.  Instead, we have an episode about a death without the death of a physical body.  “I don’t have much time left.”  This is a truly interesting way to handle a death.   But she does die and the pain is palpable.  It’s made stronger by Kyon’s reaction.

Kyon has been the audience identification for this series, experiencing the roller-coaster that is adolescence through his eyes.  When he fans Yuki at the book fair, we feel that.  When he calls Yuki, we remember that teenage excitement of being in love or finding out someone likes us!  When she says “Thanks for everything and goodbye”, we feel the anxiety as he takes off at such a speed that it actually hurts to see him get there moments too late.  Then Asakura offers us a bit of comedy through the darkness when she says “that’s more introspection than we need right now…”  But the lesson this episode offers us is that friends help us become more of ourselves.  Amnesia-Yuki couldn’t stick around because her friends brought our Yuki back.  While Amnesia/Robot Yuki was likeable, I was delighted to see our Yuki return.  And as the parent series did before, this series again reminds us of the value of friendship.

There are a few observations to share.  Yuki’s glasses again become reflectors when she has a secret.  The use of the glasses to represent the distant Yuki is amazing.  After she comes back to herself, there is a split second where it happens again when she is confused about where she is.  I love that Yuki’s idea of fun is a used book festival.  I would love that, too!  But the most notable thing in this episode is some stunningly magnificent moments of artwork.  I typically try not to overdo the demonstrations of art but this episode demands we recognize it.

Yuki’s fear of being swallowed up and lost could not be more stunningly expressed than by this image: 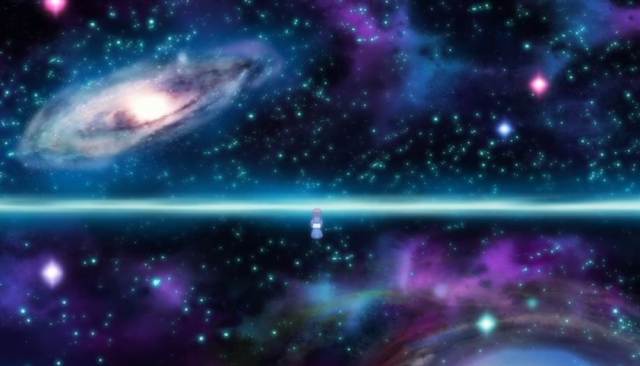 Yuki’s memories of her past self with Kyon is a powerhouse image; the universe as a backdrop to her dreams and she is reaching for the stars, hoping to inherit them.  (Her final moments on the park bench, again reaching, about to sleep in the dark.) 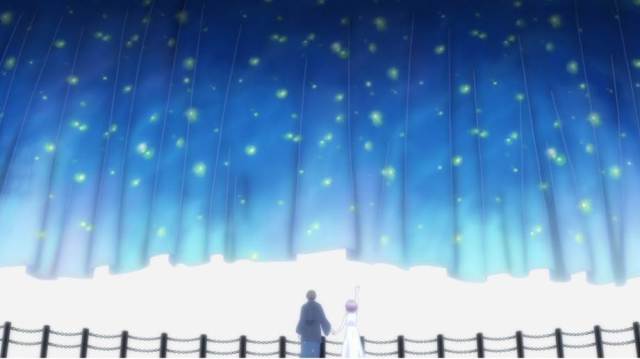 Kyon’s stunned disbelief at learning he is loved is utterly hilarious; a much needed moment of comedy in this otherwise heart-wrenching episode: 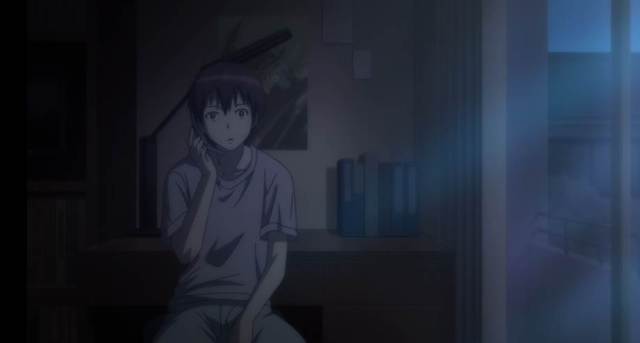 And by far, the most amazing image (which I have turned into my lock screen background): 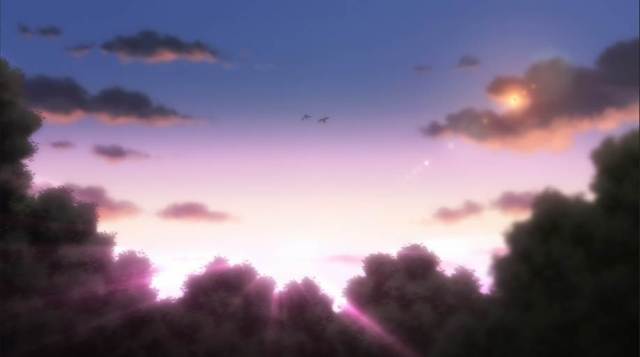 I am definitely going to finish the series but I might have to give myself a chance to rewatch, or at least digest, this episode.  The amnesia-Yuki is gone and ours is back.  But it looks like she has some questions about what’s been going on and I guess we’ll have to deal with her confusion next.  ML

Read next in the Junkyard… Nagato 14: Her Confusion