Posted on October 6, 2020 by DrAcrossthePond 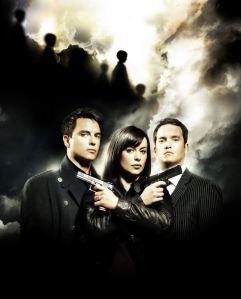 Day 5 is upon us and we have an opening of Gwen looking into a camera commenting that it’s the end of the world.  She talks of Jack’s old friend, the Doctor, and how he must look upon this world in shame.  It’s a tough opener, but when that scene comes into focus later in the episode, it packs an even greater punch because of the conversation she has with Rhys next.  Earth is doomed.  It’s doomed to lose 10% of the population of its children or be destroyed if they retaliate.  The burden is almost too much to take but that doesn’t stop the writing for adding salt to the wound: John Frobisher is expected to allow his own children to be taken to the 456.

It’s not that we like Frobisher, it’s that he’s a fall guy for a Prime Minister whose sole concern is his own skin.  The PM allows John to take that particularly nasty fall and the fact that Frobisher doesn’t murder the man on the spot is what shocked me more than anything.  There was a phone handy… Capaldi really sells his character with his range of emotions but the end result of what he has to do is gut wrenching!  I may not have liked Frobisher, but I felt for him.  Again, marks of good writing: no one is ever just one thing.  The worst part is that if he just waited a little longer…  Well, best not think on things like that.  It hurts too much.

Meanwhile the 456 reveal why they want the children and it’s disgusting: “the hit”, they say.  The children create chemicals that the 456 are “shooting up”.  The children stay alive well past their natural lives, but as drugs.  Aware, but not “alive”.  And in that moment, the Masters of the Pregnant Pause who vomit periodically suddenly seemed more believable to me.  They aren’t “dramatic” in their answers; they are high and are responding as if through a drug-addled mind, slowly forming the words needed to get an answer out.  The bile-like fluid might be them throwing up from their constant overdosing.  Whatever it is, it’s horrible and it needs to be fought.  But what do we have against so great a power?

Which brings us to Johnson.  Why does she show Alice the footage of what’s going on?  It’s clear she had a change of heart, no longer sure who she was serving, but showing Alice  the footage only served one purpose: to get Alice to tell her what she already knew.   The only chance they have to fight the monsters is Jack Harkness.  But at what price?  I get it: Johnson isn’t wrong when she says one child to save millions.  But could I do it if it were my nephew?  Could I accept what Jack has to do?  And why does no one come to even attempt CPR on Steven?  Was the solution so catastrophic that there really was no hope?  And why didn’t someone smash Dekker in the face once more, for being happy that a child would “fry”?  The episode wraps up an amazing 5-episode arc of must see tv.  But it does not give us the feel good ending of a Doctor Who episode.  But it’s an ending we will never forget.

But I’m not done talking about it yet.  As I commented about Dekker, above, I was uncharacteristically happy watching him get smashed in the face and then shot in the leg.  He was such a self-serving know-it-all, that little victory helped the hopelessness feel that much less bleak.  I think I was impressed by his quick thinking to stay alive originally, but after his laugh over the fact that a child would have to burn, I wanted him given over to the 456!   Rhys is a great character and his feelings of hope for his own child, even in a world like this, makes him one of the most consistently hopeful characters in the show.  The scene where he asks Gwen about giving up the baby almost had me blubbering.  Bridget, who has always been a hard character, turns the table on the Prime Minister giving us one more victory but it’s a good one.  He was such a selfish jerk; it felt great watching him get taken down.  And I was delighted Bridget and Lois Habiba are “free to go” because they ended up being the strongest members of the British Government.  And lastly, the death of the 456 was delightful.  I’m always the one saying we should save the aliens and find common ground.  Not with this batch!  I was delighted that they seemed to be destroyed so painfully!

Thus ends the original Torchwood.  I’ll be entering the forth season in a week, but that wasn’t Torchwood; as far as I can tell, Torchwood wrapped up gloriously with Children of Earth.  Jack leaves for a passing starship and presumably meets the Doctor, who gives him Alonso’s number as we see at the end of Tennant’s era.  Jack left Earth having saved millions of children, but I don’t think he left as a hero.   He allowed an innocent to die; and not just any innocent, but part of his own family.  His daughter will never look at him again and he has that horror to live with.  It might take millions of years to get that “dirt off his boots”.  Luckily, he has plenty of time…  ML

This entry was posted in Doctor Who, Entertainment, Reviews, Science Fiction, Television and tagged Children of Earth, Torchwood. Bookmark the permalink.