Babylon 5: Between the Darkness and the Light 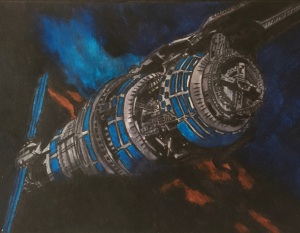 I love the title of this episode almost as much as what happens in it.  The line is a part of the Minbari mantra from the Grey Council.  They stand between the darkness and the light.  Like so much else in this episode, that’s interestingly symbolic.  The “good guys” are doing bad things for the right reasons – they are killing their own people but in the hopes of putting an end to a terrible reign.  I love symbolism when it’s done well. How about Michael getting stabbed in the back – both representing what he did to Sheridan as well as a reminder that even in season one, Michael was told to “watch his back”.   (And I’ll avoid all the symbolism with the names of the ships and leave that to the inquisitive viewer.)

The episode opens with a trick played on the viewer.  Sheridan is back in his quarters and we are initially wondering if JMS is going to pull a fast one after last week’s stunning Intersections in Real Time.  Will we be told how Sheridan escaped through flashbacks?  Or not at all?  No, the truth reveals itself quickly: this is another Prisoner-esque torture tactic taking place on Mars.  But truth plays a part in this story on a number of occasions.   Lyta shows Number One the truth of what happened to Garibaldi and even accompanies it with an outstanding line, “The truth speaks for itself; I’m just a messenger.”  Susan calls Marcus out on his hidden truth and thanks him for it.  Later, Susan says no one will tell her the truth and asks John to be the voice of honesty.  Even the council deliberation discusses truth – the truth of what Sheridan did for all of them and they now owe him.  Politics and morality on the same side!  (If only…)

Less truthful is Number One.  She tells Stephen and Lyta that she can spare only a “skeleton crew” to try to rescue Sheridan.  Now, while I found the lie uncomfortable, since she only gives a single person, that person is veteran genre femme fatale Musetta Vander.  She’s had a history with science fiction, not the least of which is Star Trek, Highlander, and Buffy, to name just a few.  The point is, I was not complaining to have her in B5.  I always felt she had beautiful eyes.  You know who else does?  Lyta.  When she probes Michael’s mind, they do that all-black thing that I find amazing.  Other things I find amazing is watching Londo and G’Kar agree and working together.  There is a lot of talk about why Londo helps Sheridan but for those who don’t know, this season was nearly the last.  JMS fought with the networks and, not knowing if they would approve the final season, some of the plot threads were “adjusted”.  I’d like to think that in the adjusted script, we were seeing Londo find his redemption.  It’s a wonderful moment.  Londo even considers Delenn’s position in the voting.  It’s a great moment and seeing the league all stand together is exactly what Sheridan said at the start of the season: “Will you stand together?”

The great moments don’t end there.  The guard who explains to Michael that he doesn’t watch TV because it’s a wasteland is very funny.  Ironically, Doctor Who had a similar scene during McCoy’s era.   Also funny is Michael’s discussion on who gulped from their canteen and Lyta being accused of being a good liar.  Of somewhat questionable merit, when Michael is jumped, he’s taking a beating, but once a bag is put over his head, a single hit can knock him out.  (Note to self: keep a bag handy…)    When Sheridan is broken out of prison, he gets his hands on a gun and unloads on one of the guards.  Who could blame him?  But the look he gives Garibaldi is actually scary.  Later, the fact that Susan remembered Marcus’s words was another great moment, but it’s made more powerful when she says to Marcus that it’s the last time she will ever trust him.  This is because of where the episode takes us: back into the darkness.

Susan gets a heck of a line.  Flying into battle against Earth ships armed with Shadow tech, she is asked who she is.  She delivers her line with icy resolve:   “Negative on surrender.  We will not stand down!  … Who am I?  I am Susan Ivanova, Commander… I am the right hand of vengeance and the boot that is going to kick your sorry ass all the way back to earth.  I am death incarnate and the last living thing you are ever going to see.  God sent me.”  She beats the Shadow-enhanced warships, but perhaps her taking the lord’s name in vain is also symbolic because her ship is damaged and she is mortally injured.  It truly will be the last time she ever trusts Marcus.  In the Minbari bed, after her accident, Claudia acts her heart out and has me on the brink of tears with Delenn, Marcus and Sheridan.  She makes one more (symbolic) request of John.  She asks him to bring the battle home from the Agamemnon.   With three episodes to go, things are heating up!  ML

This episode picks up where the last one left off, with Sheridan’s captors trying to find a way to break him. Taking another leaf out of the Prisoner book of tricks, they are brainwashing him into thinking he has escaped. I was half expecting a revelation at the end of the episode that the entire rescue of Sheridan was just another dream, but it turns out that JMS isn’t that sadistic a writer… probably. There remains the possibility that we might still have our Bobby Ewing in the shower moment at a later date. The modus operandi of Sheridan’s captors was reinforced:

Interesting, that last one, but this is an episode that uses religious language quite significantly. After all, dictatorships, propaganda, and cynical politicians in general often make use of that. The people who think they are on the right side do that too.

Now who’s behaving like a messiah? According to JMS in an interview, Ivanova’s speech is deliberately over-the-top, like a boxer who “wants to psych the other person out”. I’m not sure if it quite hits the right notes. I couldn’t help but smile at the corny language.

While Ivanova is claiming to be sent by heaven, Lyta’s super-powers raise a whole different prospect:

“What do you know about hell? Would you like me to show it to you, mine and his?”

I can’t help thinking she’s going to be the key to defeating Bester in the end. That lady has some serious skills, and that was a scary dark-eyed moment.

So we have Ivanova the messiah and Lyta raising hell, while Sheridan stands firm and doesn’t give his captors the repentance they are looking for. In the meantime, Garibaldi is looking for his chance at redemption, and JMS has done a very effective U-turn with him, turning him back into a hero again. Ironically he uses his hero status with the enemy regime to become a hero to the resistance, helping to break Sheridan out of prison. It’s a victory that perhaps comes a little too easily in dramatic terms, although he did have Super Lyta on his side. I liked the philosophising guard, which put me in mind of a similar scene from Dragonfire (Doctor Who).

“I don’t watch TV. It’s a cultural wasteland filled with inappropriate metaphors and unrealistic portrayal of life created by the liberal media elite.”

The best sci-fi challenges assumptions. These are not words we would usually expect from a guard on a prison door. They usually exist in sci-fi to be stupid and get thumped. Instead this one is clever and gets thumped, which is a bigger leap into enlightened storytelling than it sounds.

We weren’t able to enjoy the triumphant moment of Sheridan’s freedom for long, because this turned out to be a highly emotionally-charged episode. The budding romance between Ivanova and Marcus feels a little bit thrown in at the last minute to add to the impact of Ivanova’s fatal wounds. As this kind of thing goes it’s very skilfully done, but it could have used more groundwork in previous episodes beyond a compliment in Minbari. Ivanova’s emotional exchange with Sheridan ended up pulling on the heartstrings far more: this is a man having to tell an old friend the truth about her condition, and how little time she has left. Her last request is an interesting one:

“I’m assuming the command of the Agamemnon. A friend asked me to command the last battle from here.”

I wonder why. Superficially, it seems like Ivanova felt like it was the right place for Sheridan to be, back on his own ship, a rousing symbol of heroism and national pride, with his captaincy of an Earth vessel adding legitimacy to his cause. But I can’t help thinking there’s something more behind her request, because earlier in the episode this happened:

“Not everyone who defects to your side really defects.”

A couple of weeks ago I mentioned that the Agamemnon joining the resistance seemed a little too easy. Perhaps Ivanova saw the need for a change of command. This is one of many questions that remain to be answered. Does Sheridan have any lasting psychological damage from his incarceration? We did see him shooting a felled man over and over again. How will the League forces figure in the battle for Mars and Earth? It might have seemed like a triumphant moment, but a whole load of alien ships turning up might just play into the arms of Clark’s xenophobic propaganda machine. And is Ivanova really done for? She’s only being tended to by Minbari doctors at the moment. Franklin might have something to say about the prognosis. So many questions, and I can’t wait to find out the answers. B5 has my attention once more, well and truly.   RP

Co-writer on junkyard.blog. Author of windowsintohistory.wordpress.com. Editor of frontiersmenhistorian.info
View all posts by Roger Pocock →
This entry was posted in Babylon 5, Reviews, Science Fiction, Television and tagged Between the Darkness and the Light. Bookmark the permalink.

3 Responses to Babylon 5: Between the Darkness and the Light