A for Andromeda: The Face of the Tiger 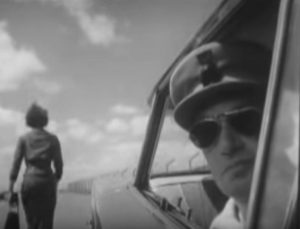 As somebody who was a dedicated fan of Doctor Who since childhood, it sometimes felt like the world as I knew it started in 1963, or at least the world of sci-fi. That, of course, was not the case at all. Doctor Who might have been one of the earliest sci-fi series on British television, but it was far from being the first. Recently I wrote about the first and second episodes of The Quatermass Experiment, which has prompted me to investigate what else there is out there to watch, from the world of pre-Who sci-fi. So from 1961, let’s take a look at A for Andromeda.

Unfortunately I can’t do what I did with The Quatermass Experiment, and start right from the first episode, because it was junked. In fact, out of the seven episodes that make up this series, only one exists in its entirety (well, almost), and that’s the sixth episode, The Face of the Tiger. If you want to get an impression of the earlier episodes, there are telesnaps in existence, which have been captioned and included on the DVD release, along with the scripts, but you will have to fork out quite a bit of money for that experience, because the DVD is out of print at the time of writing and commands an inflated price on the second hand market.

Let’s have a quick run through the story so far. The series is set in the near future of 1970. A radio telescope picks up a signal from the Andromeda nebula. One of the designers of the telescope, John Fleming, decodes the message with the help of Christine at the London Institute of Electronics, and discovers that it contains instructions to build a computer, along with a programme for the computer to run. The British government decides to build the computer, which outputs instructions for the creation of a life form. The result is a protoplasm with a giant eye, nicknamed Cyclops. Christine is mesmerised by Cyclops and the computer, makes contact with two terminals that protrude from the machine, and is killed. The computer then clones Christine (the clone is named Andromeda), and kills Cyclops, having created a superior form of life. That brings us to the sixth episode: The Face of the Tiger.

Each episode started with a little prologue narration, which is missing from the sixth episode, but other than that we can enjoy The Face of the Tiger in its entirety, including the magnificently creepy opening titles, with a hollow eyed statue turning to face the camera. The main thrust of this episode is John Fleming’s attempts to talk some sense into everybody about the dangers of the computer and Andromeda, and of course nobody will listen to reason. That’s because the computer gives people power. The Prime Minister, obviously longing for the days of Empire, sees this as his big chance:

“We’re going to be a great little country again.”

This is a classic example of nobody heeding the warnings of the hero, but you can kind of understand why they see him as a nuisance. His attempts at arguing with authority are as feeble as his attempts to damage the computer, inputting Andromeda’s name in reverse to (apparently) make it think she is dead, which of course is easily reversed. But he mounts a two-pronged attack, with Andromeda herself as his other target, and that is where I suspect he will be more successful. She is very much a prototype Spock, eschewing human emotions:

“Nice, nasty, good, bad. There is no logical distinction.”

Fleming sets about trying to teach her the error of her ways, demonstrating “nasty” with a pinch and “nice” with a kiss, although that’s pretty nasty to watch as well. It is uncomfortably close to watching sexual harassment in the workplace, and only the desperate situation facing Fleming ameliorates the unpleasant sight of a man wolf-whistling a woman and then forcing himself on her for kisses, trying to get her human emotions to kick in. Maybe Kirk should have tried that with Spock.

By the end of the episode, Fleming has a big problem. The computer is out for revenge for his attempted sabotage, and has poisoned his colleagues. Things are nicely poised for the final episode.

If you are a fan of Doctor Who and you haven’t watched this, then you might want to take a look. Two of the main stars are Who alumni Peter Halliday and Mary Morris. There is a sneaky villain on the scene as well, played by John Hollis (Sondergaard from The Mutants, but also an actor who has too many genre connections to list, including Star Wars, Flash Gordon, Superman and The Tomorrow People). Kaufman is a textbook sinister German, complete with round-lensed, wire-framed glasses and of course not a hair on his head. The computer is pure WOTAN, a huge machine with flashy lights, spinning tapes and printouts, and even the same sound effects that were used for WOTAN in The War Machines. Towards the end of the episode some incidental music kicks in, and it will be familiar to anyone who has seen The Tomb of the Cybermen.

Just before I wrap this up, I have to mention a joyous little cameo appearance in this episode from Kenneth Wynne as reporter Cluten Danvers (until I saw the cast list at the end, I genuinely thought his name was Gluten, and was running through silly jokes in my head about this not being a gluten free episode). The man is as unusual as his name, and should have had his own spinoff show. I would pay good money to watch the Adventures of Cluten Danvers. But enough of that silliness. A dangerous computer has the support of the upper echelons of power in Britain, and lives are hanging in the balance. Will anyone ever listen to Fleming? Will his kisses bring out the woman in Andromeda? We will find out next week… sort of. The Face of the Tiger is the only complete episode, but the second half of the final episode also exists, and there are ways of experiencing the rest of it, one of which is frustratingly not available to most people, but that’s a story for another day…   RP

Read next in the Junkyard… A for Andromeda: The Last Mystery

Co-writer on junkyard.blog. Author of windowsintohistory.wordpress.com. Editor of frontiersmenhistorian.info
View all posts by Roger Pocock →
This entry was posted in Entertainment, Reviews, Science Fiction, Television and tagged A for Andromeda, The Face of the Tiger. Bookmark the permalink.

8 Responses to A for Andromeda: The Face of the Tiger