Posted on October 20, 2020 by DrAcrossthePond 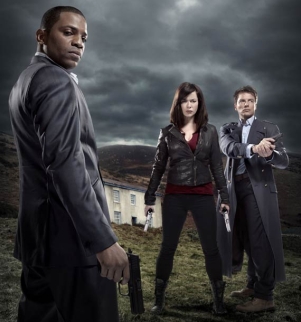 Miracle Day continues with Jack and Gwen being taken to America.  Rhys is left behind to do “spousal stuff”.  The episode is then broken into two main parts: the framing of Esther Drummond and the poisoning of Captain Jack Harkness.  I didn’t remember liking this season that much and yet, I find myself on the edge of my seat.  I think a lot of that has to do with good characters and this second episode showcases that nicely.

“What do you think they’re gonna do: kick out a window and jump 30,000 feet?”  Phifer’s Rex Matheson continues to be the new hero of the season.  Jack is relegated to a poisoned, sickly character in handcuffs through the episode giving Matheson the chance to shine.  He’s got some wonderful lines, shows a great deal of intelligence, and still seems to be interested in doing the right thing.  If he were to become a part of Torchwood long term, I would not be upset with that decision.  The situation with Jack requires quick thinking to reverse arsenic poisoning, administered by another CIA agent on the plane.  It’s tense and kept me hooked, but the reality of it is… well, not realistic.  Perhaps I only say that because I’m not a doctor, but I don’t know if one can melt down silver in a kettle on a plane, then inject it into the bloodstream.  Still, I’m not watching for medical accuracy, and the sequence is extremely entertaining.

Esther, Rex’s friend and counterpart in the CIA, is attentive to everything and upon seeing Rex’s computer being searched, realizes things are going wrong.  It takes her no time to realize she is being framed for something and makes an escape from CIA headquarters.  While not as tense a piece as Jack’s near death experience, it serves to illustrate that Esther is also extremely smart.  At least we will have intelligent heroes this season.  Let’s face it: the story last season was going to be hard to beat, but good characters could make a difference and shift the focus.

Speaking of intelligent heroes, Vera Juarez continues the trend.  She attends a medical conference and seems to be the only doctor that’s capable of taking charge.  Again, a strong character and the script shows her intelligence in the face of adversity.  That makes three characters so far that would make outstanding members of a new Team Torchwood.  Then we meet Jilly Kitzinger.  Seemingly ditzy, she clearly has more going on than meets the eye.  Is she doing that thing the second Doctor was known for: appear less capable while hiding a brilliant mind?  I think so.  Alas, she and Juarez end up being smokers, so they aren’t quite as intelligent as I thought.  But she has added a level of intrigue to the story – is she friend or foe?

Then we have Oswald Danes, played despicably by Bill Pullman.   Beyond the fact that he plays an irredeemable monster, I can’t help but wonder about the actor.  This was the President of the United States in 1996’s Independence Day.  Remember that speech?  “We will not go quietly into the night. We will not vanish without a fight. We’re going to live on. We’re going to survive. Today we celebrate our Independence Day!”  I don’t think he can ever upstage that scene; it was a defining moment for the actor.  Yet here, he instead goes for the extreme opposite end of the spectrum: a child rapist and murderer who speaks like he’s auditioning for a computer reading a book.  His on-screen apology is not enough to hide the monster and Kitzinger knows it.  But can he be redeemed after all?  I’ve said before: no one is just one thing.  Can even this monster find peace and can we find a way to view him as anything but a loathsome thing?

Gwen has her moments to shine too.  Don’t call a Welsh woman “English”; she shows Lyn who’s boss.  She also has a great commentary on America: “Don’t all American’s have big SUV’s?”  But the ensemble cast has to be built so she doesn’t have her normal range and we are still in setup mode.  The mystery is only just being explored.  Friedkin, Seinfeld‘s Newman, has a phone that spins a strange triangle and gives him the one word order: Remove.  Who is he working for and why?  How does it tie in with the Miracle?  And now that they are on US soil, what will the new Team Torchwood need to save the day?

The story is a strange one.  The big draw of the first three seasons of Torchwood is Jack’s charisma and the fact that he can’t die.  Taking that away from him creates an entirely different dynamic that has to be carried by a good story and a strong cast.  We’re too early to say if it’s a good story, but at least we have a strong cast.  While we have 8 more episodes to go, let’s just hope the story remains strong and doesn’t go quietly into the night.  ML