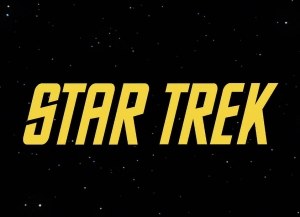 I never understood why so many people loved this episode.  “Talky” is an understatement.  We have one brief moment of action and it’s blowing up a supply depot wherein Kirk and Spock set a grenade, then run in a straight line for the nearest wall, instead of for… you know… cover.  Then, after the explosion, no one comes running, so we get back to talking.  And when the big confrontation does come later, everyone feels like things have gotten too hot to handle.  It’s perplexing!  (One might also mention being perplexed by a deaf platoon of Klingon fighters as Kirk and Spock openly discuss strategy 3 feet from a dozen of them, but I won’t bring that up now…)

What does make this one stand out is our first meeting with the Klingons!   Modern fans, who may have tuned in with the movies or The Next Generation might be surprised to see most Klingons look surprisingly human.  At least Kor comes off a bit more Klingon.  What really surprised me about this episode is how badly the Federation comes off in it.  For instance, Kirk is the first one to commit an act of aggression.  He’s abrasive with Kor the moment the Klingons arrive.  He’s strongly prejudiced against them.  He attacks their weapons stores and the first two people to be beaten up are Klingons.  And at that, Kirk and Spock epically fail to remove the blasters from their sides!  Good job Kirk and Spock!  But it’s not just with the Klingons that the Federation gets to look bad.  For instance, is it me or did Kirk seem to be offering the Organians a protection racket?  Airborne Ayleborne is resistant to it and Kirk seems to get more annoyed by his resistance every moment.  Kirk insults the Organian culture saying they have no backbones.  He tries to incite riot.  He even tells Ayleborne that he can accept death, but not “for the likes of you”.  How is Kirk the good guy again?  Kor calls him out on “good, honest hatred” which, in my book, is not the way of the hero.  So had they chosen not to play the bad guys up for being actual bad guys, I’d argue that we could have a brilliant, morally ambiguous story on our hands.  Ultimately the question that should have been raised is “why is the Federation way better?”  This could have been a seriously interesting debate, but the Klingons are portrayed even worse than the Federation so … well… obviously we know the Klingons are wrong.  Hell, Kor doesn’t trust people who smile too much – if that’s not the sign of a bad guy, I don’t know what is!

Why is the Federation better exactly, anyway?  I will bring up one of our other series here in the Junkyard: The Prisoner.  In The Chimes of Big Ben, #6 and #2 talk about what the world would be when both “sides” realize they are looking in a mirror; they realize they are the same.  Kirk and Kor have an interesting dialogue about that where Kor calls Kirk out on the idea that the Federation and the Klingon empire are “the same”, to which Kirk is affronted.  Yet, in all respects, it seems he’s right!  And to top that off, Kor is being cordial to Kirk, offering him a drink and having a debate, yet Kirk is extremely aggressive to him.  So are they, in fact, that different at all?  And we still don’t really know why Kirk’s way is better.  This isn’t to say that I’m unaware of the feud between two warring nations, but when presented with the evidence of this episode, Kirk comes off worse.  “I have no desire to see you become a vegetable,” says Kor.  Could Kirk have said the same thing if he had the upper hand?  I suspect not.  Ideological differences can make for some very good stories indeed.  I just think this episode failed to produce one.  And if you want to talk about the death of the Organians, Ayleborne says no one has died, because the Klingons never had the upper hand over the Organians.  No one did.  In some ways, by the end of the story, the Organians reminded me of Gallifreyans from Doctor Who.  They are not the wagon-riding group we believe but entities of light that have no need for corporeal form at all but there they are, acting for all the world like people on a farm.  Why?  Who knows.  Maybe they heard about the farmers and barn keepers of Gallifrey and decided it was a good lifestyle?  I don’t know.

Here’s another thing that’s confusing.  A few episodes back in Return of the Archons, Spock and Kirk determine that a stagnant culture can be interfered with, because… you know… the Federation way is better.  So why ask permission here?  Spock says the Organians are a level D on the “richter scale” of cultures and that they have had “no progress in tens of thousands of years” (despite automatic doors).  So, if they can destroy Landrau, why did they feel they needed permission from the wagon-riding Organians?   I sure don’t recall Kirk asking the inhabitants of Beta III if they wanted to pay for the protection racket!  (Of note, I could not help but laugh when my wife saw this episode and immediately said “they’ve been here before and on at least three other occasions” when locked in the cells!)

Speaking of comedy, I love the banter between Kirk and Spock.  The “it’s hard to be precise” dialogue is marvelous and ultimately I think it was the relationship between the crew that made the series so immensely popular, not the rather poorly scripted stories like this one.  I also could not help but laugh as the set was being burned in the background by the wall sconce.  Notice the fire is actually singeing the wall!  And when Spock opens the cabinet to get their weapons back, why does he leave his tricorder, which will need to be grabbed at some point or it will be left in a pre-tech culture?!  (We’ll get a far better example of this in the season two triumph A Piece of the Action!)  This story also offers another example of Spock being called, alternately, Vulcan and Vulcanian.  I hate the latter and I’m glad it vanished from history.

The episode ends with a conversation between Kirk and Spock about being humbled by the fact that human beings are fairly insignificant in the universe.  If that were the case, one might expect Kirk to be a bit more humble considering just how many times this season humans have been shown to be inferior.  (Off the top of my head, we have this, Charlie X, Arena, Squire of Gothos…)  On the other hand, it is a testament to the writers of The Next Generation that they listened to what Airborne said and built on it: that in the future, humans and Klingons will be friends.  It’s a long road, but they get there in the end, and that is wonderful.  It’s that Roddenberry-inspired hope for the future that made Trek so popular.  Well, hope and the relationship between the crew.  I guess you can’t have two main things, but there you have it… the two main things: hope and friendship.  Accept it or get mind-sifted.  ML

We’ve finally met the Klingons, and I almost wish we hadn’t. You can probably guess what I am going to say about them. Star Trek has already spent the last 25 episodes doing a thorough hatchet job on the “fair sex” with all those simpering women in soft focus, and now we have blacked up aliens with Fu Manchu facial hair, just to make sure they offend as many demographics as possible.

In defence of everyone making this, I don’t think it was entirely intentional, and I mean that in the sense that it was a lazy, almost subconscious, and above all cheap use of casual racism to create a villain. I’m sure nobody set out with the intention of causing offence. As 60s television series go, Trek was groundbreaking, featuring a black, female bridge officer. But we should not be too fulsome in our praise for that, because it’s actually little more than paying lip-service to equality. Apart from Janice in the first few episodes, who… heck, I don’t even know what a yeoman does – makes Kirk’s dinner? Apart from that Uhura is the only female authority figure, so her presence on the bridge gives the impression of ticking two boxes and job’s a good’un. And her job is… well, flicking a switch on a radio. So yes, I think Trek gets praised a little too much for this, considering we have contemporary examples across the pond of The Prisoner showing us female authority figures, and Doctor Who with a black astronaut. And to balance disappointingly against Uhura, we have the Klingons, their boot polish melting on their cheeks under the studio lights. Mind you, would the use of black actors with no monster makeup have been a better way to portray monsters? No wonder they added the ridges later. The 1960s. Sigh.

On the basis of this episode, then, the success of the Klingons is entirely down to one thing: the acting performance of John Colicos. He does charming and dangerous incredibly well. That’s always a formula for a memorable villain, but it’s not an easy thing to get right. Colicos sells Kor’s ruthlessness but admiration for a worthy enemy brilliantly:

“Here we are on a planet of sheep, two tigers.”

That gets to the heart of this episode’s message and it is remarkably anti-war, cold or otherwise. Kirk is quick to point out the differences between the humans and the Klingons, but as Kor points out that comes down to nothing more than a few organisational and ideological differences: democracy vs dictatorship. Beyond that they are instinctively the same. It is disappointing the extent to which Kirk confirms that, though:

“We can help you remake your world.”

Yet again, along comes Kirk the Empire Builder, ready to reshape any alien world in his own image. Anything that looks different is inferior. And there is no resolution to this, no point at which Kirk becomes the better man and proves that there actually is a difference between the humans and their enemies. It has happened in other episodes. It happened last week. But not here. Once again, an omnipotent third party steps in.

“There will be no battle.”

So we have an episode that is on the one hand crushingly disappointing, with lazy blackface villains, and on the other hand provides an anti-war, anti-gun message when little else on television was doing that, and even acknowledges the failings of the human race and our flawed heroes. Star Trek continues to be an astonishing series of contrasts.   RP

Read next in the Junkyard… Star Trek: The Alternative Factor

Co-writer on junkyard.blog. Author of windowsintohistory.wordpress.com. Editor of frontiersmenhistorian.info
View all posts by Roger Pocock →
This entry was posted in Entertainment, Reviews, Science Fiction, Star Trek, Television and tagged Errand of Mercy, The Original Series. Bookmark the permalink.