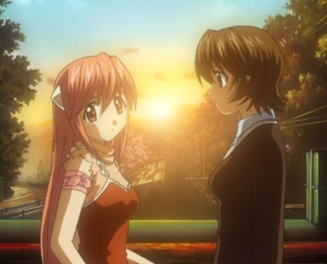 This is a very well-titled episode, because it revolves around a huge battle between Lucy and Nana. The “attack” of the title is actually an attack from Nana. Lucy has no wish to kill one of her own, but once provoked and fighting for her life she is lethal and ruthless.

That line surely echoes our own thoughts in that moment. This was my least favourite episode of the series, revelling in its sadism far too much. What happens to Nana is horrifying to watch, especially as it happens at the hands (well, vectors) of a character we are supposed to like. But Lucy and Nyu are not the same person. Nyu returns to her happy home, seemingly unaware of what she has just done. It’s the ultimate split personality, with no retention of memory at all.

Thankfully there are other strands to the story to stop it being the most depressing thing every made. The mystery of Mayu continues, with confirmation that she is homeless, but no information as to why that might be. She has been buying crusts of bread from a pet shop and eating them herself, which is very sad to watch. No child should have to struggle to survive in that way. Luckily she has found Kouta and Yuka, and we get some lovely moments where she experiences some home comforts for the first time: a well-cooked meal and a hot bath. Interestingly it is Yuka who is instrumental in taking her in and offering her food and shelter. Despite her jealousy she is a good person deep down, and doesn’t let her worries about bringing rival girls into Kouta’s home stop her from doing the right thing. Her extreme jealousy is hard to watch, as usual. Apart from the close relative thing, poor Kouta just doesn’t deserve the treatment he is getting from her, and the punch he receives this week is too much. I mentioned last time that I don’t like stories that show violence without consequences, and female-on-male violence should not be an exception. It was bad enough when she was slapping him, but a full on punch is surely grounds for him to cut her out of his life altogether. Some kind of fallout from that moment would have been useful, but instead they just fall back into the same pattern. Maybe life really is like that for some people, in which case it’s OK to portray that kind of a twisted relationship, but the wrongness of it should be acknowledged in some way or else you have an empty message at best, or at worst no message at all and a lazy acceptance of violence, as long as it only runs one way. In a series that is otherwise brilliant at exploring the consequences of immorality and the benefits of kindness, this is an oversight. I suppose the best thing you can say about it is that it does establish Kouta as the ultimate nice guy main character. He puts up with a lot.

Many more questions are asked than are answered this episode, leaving us wanting to find out more. I mentioned the mystery surrounding Mayu’s background, but now we also have the mysterious director of the scientists, and his son who has some kind of personal vendetta against Lucy. Then we have the strange relationship between Kurama and both Lucy and Nana. Once again Lucy refuses to take the chance to kill him, and was he really able to end the life of the girl who calls him “Papa”? She is intuitive enough to understand what he is doing, and says goodbye to him, bearing him no resentment even as he apparently administers the lethal dose. It’s a heartbreaking moment, and a horribly downbeat ending to an episode that was a struggle to watch. Things can’t get any worse than this, surely?   RP

I timed the opening music, which I love, but wanted to know how long it chews into the timing of the episode.  I timed it at 90 seconds.  It’s official: this series is giving us 20 minute episodes and in that time it has to pack in quite a bit, because so far, I’ve not lost my momentum once.  And let me come clean, I have a confession: I was ready to shred this series.  Roger warned me about things that typically turn me off to anime, and he probably hypnotized me or something but I can’t really find things to blast yet.  I shouldn’t be surprised really.  One thing I’ve learned while we poke around in the Junkyard is that we typically know what things will appeal to one another.  Like the analogy of actually raiding a physical junkyard, neither of us will proudly pop up from a heap of junk to say “oh, look, I found an antenna!”  Who cares!  We’d shrug and go back to digging for more treasure.  But when we find a robot dog, or a strange village where we could be interrogated for 17 weeks, or a space station trying to keep the peace, or a blue box that can go anywhere in time and space, or horned girls with vectors that can rip people to shreds… well, we come a’runnin’ to like kids let loose in an old fashioned candy shop (pre-cell phone, of course).  And that’s basically how I go into each episode, dying to know what happens next.  I think I probably giggle slightly with each new episode like I’ve also found an unopened pack of Wacky Wafers (which that embodiment of evil himself, Willy Wonka, stopped making when I was a kid!)

With that, this latest episode recaps the last few seconds of the previous episode with Nana confronting Lucy, claiming she will take Lucy home.  Unlike the previous story, this leaves no room for buildup.  They immediately get into a fight.  Lucy asks if Nana is there to kill her, but Nana proves to be the morally decent one who says she would never kill one of her own kind.  During the fight, Lucy learns that Nana has “longer vectors” than she does and has to be smarter about the way they do battle.  Sadly, Mayu comes running into the fray and Nana, again proving to be the better person, makes a gross error of judgment and reaches out to protect her, putting herself right into Lucy’s range.  I think I gasped as her fingers we severed from her hand, then her leg came off.  As Nana is ripped asunder, I felt awful.  I mean REALLY awful, not just “aw, that’s sad” awful.  And with that, I realized this story is more than a cartoon, just like the superb Erased and the magnificent Another.  We are shown Lucy and from the moment we meet her, she’s on a killing spree.  We should see her as the enemy, evil (like Wonka).  But having seen that she was captive on an island and people are trying to kill her, we are forced to question the morality of those around her, and we start to believe that maybe she is a good person forced to do bad things.  When she meets with her human friends, Kouta and Yuka, that idea is solidified further, because how could you not like Nyu (her alter ego)?  (I mean, she’s sexy, runs around naked and has super powers.  Isn’t that every guy’s dream?)  All kidding aside, the complexity of the characters is easy to overlook because we’re watching an animated series, but once again I’m reminded that we should never judge a book by its cover.  Or a series by its animation.  Cartoon or not, this is not a children’s show and we are investing in deep stories.  (I know some writers who could learn a thing or two watching a series like this.  I’m looking at you, Chibnall!)

The crazy thing is that even as people are being ripped to shreds, there’s a range of emotions to be experienced.  There’s comedy: last episode, Kouta made the comment of Yuka, “glad she didn’t punch me”.  Well, she does this time and he goes flying, and once again has the hand print on his face.  There’s the music: beyond the opening piece, listen to the music played for Yuka – it’s stunning in its beauty.  We have a mystery: why is “papa” safe from Lucy?  Lucy clearly has no issues ripping people to pieces; why leave him intact when he’s clearly at the heart of the pain she’s endured?  There’s kindness: Mayu is homeless and eats scraps, so effectively two strangers take care of her just because they can.  And there’s raw emotion: when Papa has to put Nana “to sleep”, she knows she won’t wake up and says goodbye… And I was floored.  I mean this is a damned cartoon character who has had less than 30 minutes screen time over three episodes (remember she was introduced briefly at the end of episode 2 and by episode 4, she’s dead).  Yet, I want to cry over that death.  And she was introduced as the heavy who was going to bring Lucy home but I’d argue that she was far from the bad guy!  That’s what I loved about Babylon 5: there’s a complexity to the writing and when you’re not sure who’s side to be on… well, that’s damned fine writing.  That’s also probably more true to life than most good guy/bad guy stories.  Rarely are there bad guys.  I’ve said this before but it seems appropriate to remind myself: there are differences of belief.  There are rarely caricatured bad guys.

I struggled about watching the next one immediately.  I needed to give myself time to process Nana’s terrible death.  And I need to wonder about the man behind Papa.  Who is he?  Why is his son in need of money?  And just how much are we supposed to learn about the Diclonius?  (I had to end on a happy note and saying that word is just icing on the cake!)  Diclonius… Diclonius.  I’m feeling a little better about Nana now.  If only I had some Wacky Wafers to snack on…    ML

Author of windowsintohistory.wordpress.com Co-writer on junkyard.blog Editor of frontiersmenhistorian.info
View all posts by Roger Pocock →
This entry was posted in Anime, Entertainment, Reviews, Television and tagged Attack, Aufeindertreffen, Elfen Lied. Bookmark the permalink.