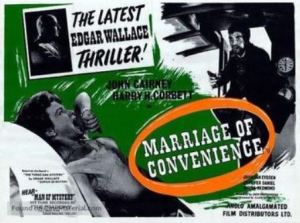 The first Edgar Wallace Mystery featured Wilfred Bramble, and now it’s the turn of the other Steptoe, Harry H. Corbett, this time in the lead role as Inspector Bruce, a detective on the trail of an escaped convict.

We start with a bride looking wistfully at the wedding before hers, with lots of guests and a photographer. Nobody has turned up to see her own wedding, not even a witness, and the groom is late. When it turned out that the wedding was not going ahead, but was merely a ruse to help the convict groom escape from his guards, I did wonder if I had misunderstood Jennifer Daniel’s performance as Barbara, but actually I think that look of sadness was entirely deliberate. Later in the film it is pretty obvious that she has feelings for Larry, and there is a hint of a romance between them. I think Barbara is helping him for reasons other than just simple friendship.

Larry is pretty single-minded, though, a man on a mission to recover a huge amount of money that should have been waiting for him. Everything else is secondary to that, even the loss of his girlfriend and any thoughts of revenge on the man who took both his money and his girl from him. The final encounter between Larry and former detective Mandle makes that clear. At one point Larry has the money and doesn’t shoot Mandle, and I don’t think his half-baked getaway plan has much to do with failing to pull the trigger. Larry is not a monster, which is what makes this such a compelling film to watch, and an interesting one because for much of the film we can’t help rooting for the escapee. That has its limits, though. When he encounters a very stereotypical “simple French onion seller”, with a very dodgy accent, he starts beating him up for information. At that point he loses what sympathy we had for him, and the same feelings are reflected in the actions of Barbara, who not only does the right thing and gets the onion-seller medical attention, but willingly tells Bruce where to find Larry. It’s a clever bit of writing, because it’s important that the viewers are on Bruce’s side for the final showdown.

If our feelings towards Larry go through some changes, the same can certainly not be said of ex-policeman Mandle, who is a revolting character. Bruce’s reaction to him is one of a couple of moments when we can’t help but lose respect for him. Earlier in the film he proves himself to be a bit of an idiot, when he arrives at the garage and never thinks to check who is working under the car outside (of course, the biggest fool is the policeman stationed outside, who just watches him drive off!). But the hardest thing to watch is Bruce’s nervous meeting with Mandle in his house, when the sort of old hierarchy between them kicks in. Bruce looks like he is deferring to Mandle, sucking up a bit, and quite scared of him, despite the fact that Mandle is retired and obviously has the stolen money. Mandle hardly even makes much attempt to hide that fact. If anything he’s proud of it. Later when Bruce returns to the house and finds Tina there, he is again a bit dense. Tina is quite clearly terrified and it’s obvious that Larry is inside. One possible interpretation to the mistakes Bruce makes is of course that he is playing a game and biding his time, hoping not just to recapture Larry but to get Mandle in the process, but that’s left to the viewers to guess. I’ve never read the original novel on which this film is based (The Three Oak Mystery), but I would be curious to know if Bruce’s mistakes are explicitly explained to be a deliberate ploy in the original, and that aspect of the story was lost in its compression to a one-hour format. If so, a hint of it remains, but not enough to avoid Bruce looking incompetent, and that’s a shame.

Despite that, his moment of triumph is brilliant. Throughout the film Corbett’s performance is capable, but not particularly memorable, but the final moments are a masterclass in conveying emotions without any words at all. When he arrests Mandle, Corbett manages to convey disgust, disappointment and triumph all in one go, and when you think about it Bruce would absolutely have those kinds of mixed feelings about arresting a former colleague. Very poetically, Mandle is taken into custody with his own handcuffs, and then Bruce walks away with a flicker of a smile on his face. Great stuff. This is the most straightforward story in the series so far, but also by far the best.

P.S. Eagle-eyed readers may have noticed that I’ve skipped out The Malpas Mystery from October 1960, which was shown between Clue of the Twisted Candle (September 1960) and Marriage of Convenience (November 1960). That’s because I’m watching these using the first volume of the Network DVD releases, which oddly misses out The Malpas Mystery but otherwise includes the other seven of the first eight films. It was eventually included on Volume Six, so I will get to that in a future article if I continue watching this film series.   RP

Read next in the Junkyard… The Edgar Wallace Mysteries: The Man Who Was Nobody

Co-writer on junkyard.blog. Author of windowsintohistory.wordpress.com. Editor of frontiersmenhistorian.info
View all posts by Roger Pocock →
This entry was posted in Entertainment, Movies, Reviews and tagged Crime, Films, Marriage of Convenience, The Edgar Wallace Mysteries. Bookmark the permalink.