Posted on December 3, 2020 by DrAcrossthePond

Over the last few weeks, I’ve been taking part in what I call “comfort gaming”; replaying those oldies but goodies during a year woefully devoid of the joy and excitement we typically have in our lives.  I don’t know about you, but as the year draws to a close, I don’t want to linger on downers!  So I went back in time for some classics and realized it had been a long time since I took on the last name of Shepard.  (Perhaps unoriginally, Mike Shepard to be precise!)

Mass Effect was originally a 2007 XBOX exclusive and, as a PC gamer, I was not about to buy a gaming console just for one game.  I remember watching someone play it: they were on a planet where these long spikes shot up from the ground upon which blue-veined corpses appeared to rest.  Then the spikes retracted and the corpses rose and attacked.  This was the sort of thing I loved!  The game seemed to capture good storytelling, space exploration and a dynamic cast.  I was chomping at the bit for this game to hit the PC world.  When it did, I wasted exactly NO TIME in buying it.

Mass Effect is a third person action RPG.  In other words, you look over the shoulder of your character for a story driven game where you gain skill points to increase your characters’ proficiency in a variety of skills.  RPGs are genuinely good fun but they are often associated with the fantasy genre, like Dungeons & Dragons, so finding a good science fiction one is a treat.  The game allows you to customize your appearance, then select a backstory and style of play.  This last is how you configure your “powers”.   Effectively these are choices that allow you to use special telekinetic abilities, but I was strangely happy to remain a human soldier, knowing I’d have companions with those other abilities.  It worked well for me.

The weirdest thing to get used to is the run key.  This is typically the shift key in most games, but ME defaults to the space bar.  The easiest thing to get used to is the mouse controls.  The best element of the game is the character development.  I found that each character I met, I cared about.  I was determined to protect them.  The writing is strong enough that they become friends!  Sadly, you will be challenged to choose between two of your team at one point in the game; one is bound to die.  I had to think long and hard to make the decision: there’s Ash, a female soldier that I’d been flirting with or there’s Kaidan, a male telekinetic who is one of your first allies in the game… (Already a soldier, I considered that maybe I needed that telekinetic on the team.  But the story is a life and death one so my chances of survival are slim…  It’s a tough decision, I tell you!)

Speaking of the story, a massively powerful enemy is coming to destroy all organic life and it’s up to you and your crew to save the day.  It sets up a very intriguing story and I was completely invested.  But as much as I love the game, it’s not flawless.  On a few occasions, one of my characters would get stuck somewhere and I’d have to leave the area for them to magically appear at my side.  (Ironically, a friend of mine who is playing it for the first time just shared with me that he had this exact same issue!)   I also hated the overheating guns which thankfully becomes a thing of the past in the later games.  Also, the reload speed was painfully slow, especially when in close-quarters combat.  (But I was really good at beating enemies by hand when that happened!)  The most painful element for me though was the elevators.  Good lord… in my real-life office we have the slowest elevators on the planet.  In Mass Effect, we have the slowest elevators in gaming history.  If you remember to click on one of your allies before the elevator starts to move, you at least get to hear them talk to you, during which my brain filled in other bits of conversation.  If you forget, you get to watch them travel until the elevator arrives at its destination.  Slowly!  (Thankfully, that too is gone in games 2 and 3!) 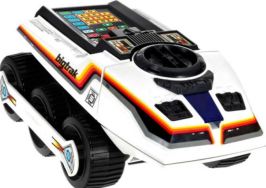 You travel around space in a beautiful ship called the Normandy.  It uses a hell of a nice interface for travel.  The ship has many levels and some of the crew can be found on each one, adding a sense of adventure just being on your own ship.  The captains quarters are great too, coming equipped with an aquarium.  (Although I didn’t know how frequently to feed my fish and many of them died…)  You also use an ATV to explore planets (called Big Track… or no!  It’s called the Mako, but every time I got in it, I was reminded of my toy from childhood, which I still have in the basement!).  With the Mako, you explore planets in search of adventure.  Sometimes, all you find is minerals, sometimes you get lucky and find ancient artefacts… and sometimes you find battles.

Another nice element of the game is seeing, or rather hearing, old friends.  No, I don’t mean I knew the characters before playing but many of the voice actors are well known.   Lance Henriksen (Detroit Become Human), Scott Evil himself, Seth Green, Marina Sirtis (Star Trek‘s Deanna Troi) and Robin Atkin Downes (Byron of Babylon 5 fame) all make an appearance.

Like any RPG, I tend to go for side quests first.  I do this largely to build up points so I have a stronger character going into the later battles.  Many of the side quests make a difference and in some cases, even carry over into the later games.  (More on that next week!)  Others were lame but I was determined to complete them (like find all of the types of minerals you can on each of the planets!)

I was delighted to play it when it first hit PCs and I was even happier with it having come back to it all these years later.  It still retails for $20, but you will definitely get your money’s worth.  The game reminded me of Babylon 5 in many ways, complete with the Citadel station for the main base of operations.  Yet, for all I loved about Mass Effect, it wasn’t until Mass Effect 2 that I felt like I’d been caught in the gravitational pull of a black hole.  More on that next week.  For now, here’s the trailer for one of my favorite game series of all time…  ML

Like Loading...
This entry was posted in Doctor Who, Entertainment, Games, Reviews, Science Fiction, Technology. Bookmark the permalink.