Posted on December 10, 2020 by DrAcrossthePond 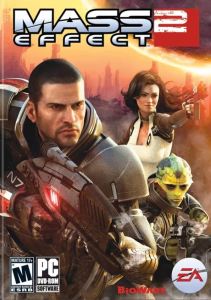 Last week I mentioned I had gone back for a replay of Mass Effect which proved so entertaining, I jumped immediately into Mass Effect 2.  Mass Effect 2 was released in 2010 but between my playing the first and second games, my computer motherboard fried and I ended up waiting to buy a new computer.  The end result was that I couldn’t do something back then that I was able to do now: import my character.  Now you might not realize how spectacularly unusual this was for a PC gamer – I can’t say if this is normal in the console world.  Effectively the game imports all of your actions, choices and outcomes from game 1.  The result is a hugely entertaining narrative.  The character himself (or herself) carries over in appearance too.  I did notice my hair had gotten a bit darker, but otherwise looked exactly like my original character.  (Interestingly, going from game 2 to 3, my hair color came over even darker still!)

Mass Effect 2 opens where the last one left off but in no time at all, your ship, The Normandy, is attacked and destroy and you are killed.   Yes game 2 starts with your death. You are brought back to life by Cerberus, a mysterious organization that you encounter in game 1 as a corporation that runs experiments on people.  (They are encountered primarily in side missions.)  They bring you back to life because their leader, the illusively name Illusive Man, wants your help in defeating a new enemy, the Collectors.  But like any illuminati-style character, he has ulterior motives which don’t become entirely clear until the end game.

ME2 plays differently than the first game.  There’s greater control over the party, no issues with overheating weapons and most importantly, talking to your crew opens up “loyalty missions”.  Loyalty missions give added game time, and offers a change in outfits for your companions.  I admit, I thought this was purely an aesthetic choice for a while before I noticed that both outfits (the default and the loyalty one) had different stats.  This proved very helpful when I needed someone who had better shield regeneration or higher damage points.  The cast is far more diverse too and the characterization is better.  One disappointment for me was that Ashley, my romantic partner of game one, is disgusted that I joined Cerberus and refuses to have anything to do with me.  I felt truly jilted.  On the other hand, Tali and I became closer, which really suited me better anyway, because she was not as, shall we say, human-centric as Ash was.

This game changes some other things up as well.  The silly “kill time” missions were gone; I didn’t have to go looking for 20 heavy mineral planets and 10 gas ones, nor did I have to wander the station looking for keepers to scan.  Also gone is the interminable elevator ride.  Another loss is the Mako, the cool Big Track looking ATV that you go searching each planet with.  Instead, you get a scanner to scan planets and find special items – one might call them “sens-oars”, if you ever listen to Mr. Spock!  (They maximize this in the third game.)   Another enhancement was in the captains quarters of the Normandy – there’s a medal display which gives you some ideas about what special missions await you.  I managed to get almost all of the medals.  A big goal for me was to do all the loyalty quests because, frankly, I really cared about my crew.  I succeeded in all the loyalty missions, but did miss 4 awards by the end.  Three were to defeat enemies with special abilities (for instance 20 warp killls, etc) but since I didn’t play as a psi-character, I found it more of a challenge than I wanted to undertake.  (Plus I realized it so late in the game, it became too much effort to keep finding enemies to use those powers on.)  The one I desperately wanted though was to keep everyone alive through the suicide mission…

Suicide Mission is a track on the score of the game and is one of the most amazingly powerful pieces of music I ever heard in a game; certainly worthy of any big movie score.  (Give it a listen here.)  It accompanies the final mission of the game.  I didn’t know it at the time, but having replayed the final mission three times to save everyone (and still failing to do so) I discovered that having all the loyalty missions does gives you an edge, but it’s still no guarantee everyone will survive.  There are three primary parts to the suicide mission and you are given choices to allow different characters to take on different tasks.  Still, I managed to only lose one character each time; twice it was the same character: Mordin Solus, the Salarian who sang his own version of Gilbert and Sullivan’s “I am the very model” earlier in the game.  (Still one of my favorite scenes in the game!)  I accepted the loss of Mordin for game three and imported those decisions but more on that next week.

The character I lost in the first iteration of the suicide mission was Tali, and I wasn’t having that.  Tali was my romantic partner in this game and she truly is a great character.  Her species are nomads and have nearly no immunity to disease so they have to live their lives in a bio-suit.  But as you and Tali start to become romantic, she tries to find ways to boost her immunity so she can get closer to you.  Just before the suicide mission, she came to my cabin.  She took off her mask and she looked like…

When I was a kid, one of my first video games was released by EA (Electronic Arts).  It was called Starflight and it was amazing.  This was in the days of gaming when all we had was a monochrome monitor.  A few years later, Starflight 2 came out but required a CGA (4-color, lol) monitor.  My dad and I went out and bought a new monitor for that game.  That should tell you how good it was!  Meanwhile Bioware had become known for some of the best RPGs in the business.  Mass Effect 2 is the result of EA and Bioware and it’s incredible; truly breathtaking.  Together they crafted one of my favorite game series of all time.  Oh, I still love the memory of Starflight, but this game really shows how far games have come.  Narratives like this make me realize we are no longer just watching a great movie; we get to actually play in one.

I could go on speaking about Mass Effect 2 for several paragraphs.  There’s plenty to say.  Instead, I leave you with the trailer.  Next week, I’ll wrap up the Mass Effect series.  I may eventually replay Andromeda too, the 4th game, but it’s not part of the series and without my friends, Tali, Garrus, Ash, Miranda, Jack, Thane, Wrex… it just wasn’t the same.  But that’s the price you pay for good characters and good writing… sometimes you just can’t catch the lightning in a jar, no matter how many mass effect powers you use!  ML

Like Loading...
This entry was posted in Doctor Who, Entertainment, Games, Reviews, Science Fiction, Technology. Bookmark the permalink.