Posted on December 17, 2020 by DrAcrossthePond 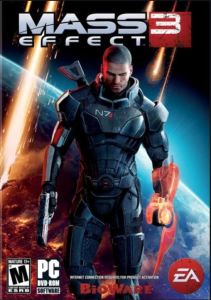 In 2012, EA and Bioware, two of my favorite game companies of all time, launched Mass Effect 3.  It was time for Mike Sheridan to captain the Normandy one last time.  I have to say it was a mixed bag for me.  I wanted to do all the missions and finish everything… but I didn’t want the game to end.  I mean, the characters sell the series and creating a character that looked like me allowed me to bond with him even more.  My decisions really felt like my own and that added to the enjoyment immensely.

So what’s this one about?  It’s six months after the events of ME2 and the threat of a Reaper Invasion is realized.  They arrive in force! Earth is attacked and decimated (look up the cinematic trailer for an idea of what that looked like); resistance cells hold up while you are out recruiting a fighting force.  Meanwhile, you’re allies are trying to build a top-secret weapon from Prothean technology to wipe out the invaders.  The stakes have never been higher!

Considering how utterly devastating Sovereign was, the original Mass Effect Reaper, imagining a galaxy filled with these beings is terrifying.  Can they even be defeated?  Mass Effect 3 changes some things to enhance the gameplay and make it feel like a real military scifi game.  The planetary scans, changed in game two (from the Mako exploratory missions) is improved upon.  Now, scanning planets reveals items that go towards your overall fleet strength, encouraging you to explore every possible world for more allies and tools.  You have a new room on the Normandy for reviewing fleet strength in general though the percentages always said 50%.  (I don’t know if this was something I was doing incorrectly, but it did not impact my enjoyment at all!)  Side missions for my crew were picked up when my new assistant (since Kelly died in game two) tells me someone wants to meet with me.  I was able to ask people to my quarters for those meetings.  (This offered another surprise.  My new assistant was quite lovely, and there was no indication of Tali being in the game, so I asked her if she’d be interested in getting better acquainted, only to find out she had her eye on somebody else, but the game doesn’t pander to the moment, and instead she turns the tables and offers to beat me in chess!)  When Tali did turn up later, I was delighted but she’s pulled some rank since we last met.  I wasn’t sure she’d be interested in rekindling our relationship.

Thankfully Tali and I were still as close as we had been which leads to one of the really nice things about ME3: we are given a chance to wrap up some storylines; some of which started in game 1.  The Rachni turn up again and we are able to make a final decision on them.  I was gratified that my decisions from game one still imported smoothly.  The Krogan Genophage, a disease created by the Salarians to limit population growth, was finally cured by me and my crew.  I was able to reunite Miranda with her sister and help Samara resolve a conflict with her surviving daughter.  Speaking of families, I helped Thane Krios wrap up his story with his son too.  And we got Tali back to her homeworld and reclaimed it for her people.  The reward I received for that mission may live in my memory forever.  (Leave it to Bioware and EA to come up with something so clever!  They kept a mystery while solving the same mystery!  Kudos for ingenuity!)  And Edi, my shipboard computer, gets a body in this game which has my pilot, Joker, somewhat enamored.  (Perhaps rightfully so!)

I had one gripe with the game!  I could not complete one mission.  I looked it up over and over, but it seems that while I had the mission, I had died and it reset it – I had to go see a Turian on the Citadel and give him codes.  He vanished and never returned.  But it was one of those side missions of limited import, so I can let that go, though I wish I didn’t have to.  On the other hand, retaining my Specter status had a benefit that was neat: I had access to a special terminal that allowed me to push projects through for approval and get special weapons.

The threat feels bigger than ever and the Illusive Man and his Cerberus operatives are everywhere, working in the shadows for “the greater good”.  Earth hangs in the balance and the holographic reports from my colleagues back home really created a sense of urgency.  Failing a mission, which may or may not have been scripted, hit home like a Krogan’s fist.

Each game in the series was an improvement on the last.  The graphics are better, the choices are better and the plot is deeper.  The characters are at least as strong as before and the only thing missing was the soundtrack which, while still excellent, did not hit the high note of ME2’s Suicide Mission.  And once you commit to the final mission, there are no side missions to go back to.  Which struck me hard that this was to be my last mission, whether I liked it or not.  Unlike the other games, the ending gives you a choice.  Merge with the Reapers, destroy them, or control them.  There are three physical paths, each leading to a different outcome.  (So the first time, I didn’t take any!  I turned and took a pot-shot at the hologram offering me the choices and found there was at least a 4th ending!  I reloaded to make my real decision…)

You know what?  It’s was as it should have been.  I could not have given Commander Shepard a more appropriate ending for the way I played these games.  I made the best choices I could in the end and found myself mostly at ease with the choices.  I did have one real pang of regret though where Tali was concerned.  We had talked about going to her homeworld to live together, with a nice view of the water.  (And I even earned myself a summer getaway house, so we had a place to vacation!)  It depressed me that I would never have that opportunity.

As I watched the final credits, I realized that this was not one of three games, but 3 parts to one amazing game.  I can’t recommend the Mass Effect series enough.  The characters and the story will forever be a part of my memory.  It was one of the richest game universes I ever had the pleasure to experience.  If only Cerberus could bring me back like they did in game 2.  Such is life… and death, I guess.

Enjoy the trailer, then look below for one small spoiler…  I can’t resist!

I stuck around for the credits; the camera comes back and finds my body.  And Mike Shepard gasped…  ML