The Edgar Wallace Mysteries: The Clue of the New Pin 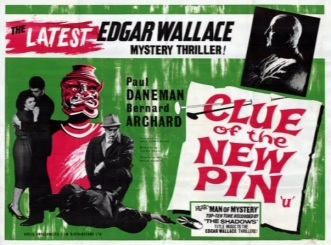 I suppose the best way to describe this entry into the Edgar Wallace Mysteries film series is a locked room mystery. There certainly isn’t a lot of mystery apart from that, with the identity of the killer in no doubt at all. It doesn’t even function particularly well as a sort of prototype Columbo. As enjoyable as Bernard Archard is to watch as Superintendent Carver, he really doesn’t have much to do other than respond to events as they develop around him, so this is far from being an interesting game of cat and mouse. In fact, both cat and mouse are pretty foolish.

This is a story that relies on most people doing very silly things. If anyone (apart from the journalist) showed a grain of intelligence, none of the events of the film could actually unfold in the way that they do. Let’s start with the victim. Trasmere is a horrible man, so we certainly can’t sympathise with him. He’s a miser who is nasty to everyone, including his own nephew, and seems to have little purpose in life other than to count his money and stand around drinking alcohol. Having told his nephew that he is disinherited and has to move out, he then absurdly co-operates when Rex wants to see his will. It just about works, as a portrayal of a man who is blinded by his own arrogance.

Then we have the murderer, who makes absolutely certain that there can be no other suspects, by repeating his crime exactly, and doing so with the only other suspect as his victim. It might seem like he was boxed into a corner, but he wasn’t. He could have played along with paying off Brown and dealt with him at a later date, perhaps when the old fool came back for his next “instalment”, or if he felt the need to murder him straight away then why duplicate the original crime? We are talking about a man on the run, wanted as a suspect in a murder. Couldn’t Rex have at least attempted to dispose of the body as far away as possible from the house, rather than leaving him in the vault again?

Right, let’s talk about that vault, and the locked room mystery that provides us with probably the only really interesting thing about this film. Firstly, I’m no expert, but a vault that is accessed by one small key doesn’t seem very burglar proof, and I didn’t buy the line about skilled locksmiths taking an hour to get inside. Nor can I see why the detective wouldn’t have assumed the key had simply been copied. If you kind of put that to the back of your mind, and pretend it’s not an issue, then the locked room mystery is a good one. How does a man come to be dead inside a locked vault, with the only key sitting on a table inside the vault? The solution, when it arrives, is undeniably clever, and I’m not entirely sure I completely understood exactly how it works, despite having watched it done in great detail. I can’t say I felt excited by the solution. Instead, it was a bit like when you find out how a magic trick is done. The solution is always a little bit prosaic, and never as fun as the mystery of the trick itself. But the bigger problem with this is that it’s not really the issue from Carver’s point of view, is it? Yes, the mystery of how the vault came to be locked is one that needs an answer, but that answer doesn’t really alter anything in terms of the murder. The basic facts are that Trasmere has been murdered (he couldn’t have locked himself in anyway), and the location of the key is just a distraction. On a basic level you still have a murder, and a murderer somewhere who needs to be identified. The waters are muddied when Carver says the murder took place at 8pm, a time for which Rex has an alibi (in fact, he makes a point of making sure Tab is aware of that, by asking him the time when he arrives). I might be missing something, but I didn’t understand how Carver managed to achieve that, unless he just got lucky with a mistaken time of death. That seems to be a more important aspect of the murder than the key on the table, and I don’t know why Rex thinks the key being inside the room again will prevent his arrest for the second murder.

So this feels like we are one re-write away from a really good story, and I would be interested to read the original book and see if something got lost in the adaptation that made a bit more sense of it all. It ends up as a rather unrewarding viewing experience, and once again the detective doesn’t get his moment of triumph at the end, with nobody left to arrest. But the film does work well as an exploration of arrogance leading to people’s downfall. It’s not just miser Trasmere, but blackmailer Brown as well. He plays with fire, blackmailing a murderer, and is so sure of his invulnerability, having figured out that his death will implicate the murderer… and then the murderer pulls out a gun and shoots him. The look of surprise on his face in his final seconds says it all. Pride comes before a fall.   RP

Author of windowsintohistory.wordpress.com Co-writer on junkyard.blog Editor of frontiersmenhistorian.info
View all posts by Roger Pocock →
This entry was posted in Entertainment, Movies, Reviews and tagged Crime, Films, Locked Room Mysteries, The Clue of the New Pin, The Edgar Wallace Mysteries. Bookmark the permalink.