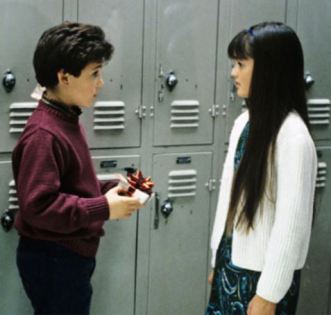 The Wonder Years was a series that meant a lot to me as a child. I was about the same age as Kevin when I watched it, and it explored a lot of the issues of growing up that I was experiencing myself. I’ve never wanted to go back to watch it again, as it felt like the right show for the right time. It belongs to the child me, not the adult. But at the end of 2020, one of the most challenging years for the human race, maybe it’s the right time to take comfort from the past, and hope for a better future as well.

Christmas is one of the early episodes, the third from the second season, following on from a short run first season. It first aired in the US on 14th December 1988. I have no idea when I might have seen it in the UK, possibly not even at Christmas, as it was quite common to see things at entirely the wrong time of year when they were imports from the US. I don’t retain any memory of watching this specific episode the first time round, but I do have some abiding memories of watching the series in general. Firstly, I was eternally confused as to what I was watching. I could see that it was set in the past (this episode is set at Christmas 1968), but I’m not sure I ever figured out that it wasn’t actually filmed in the 60s. I was a child. What can I say. But my strongest memory is the way I identified so strongly with Kevin, and the feelings he was experiencing. In this episode in particular there are two issues that were all too familiar to me: Kevin pining after a cute girl, and the magic of Christmas starting to fade.

One important thing the series taught me, which comes across strongly in this episode, is that life is messy, and you can’t always get what you want. In fact, what you want isn’t necessarily what you need. Kevin and his brother Wayne want a colour TV, but the things cost a fortune in ’68. Their dad starts to feel resentful, and it probably hurts his pride that he can’t just fund one without having to worry about the cost implications. Christmas is a tricky time for him, often putting him in a bad mood, because of the financial pressures.

“It’s not like I don’t work hard for a living you know.”

Kevin’s mum wants the television as a way to cement the family together.

“I saw us here watching it together. They grow up so fast Jack.”

Kevin bemoans the “holiday traditions”, the “old stories”, but for his mum they are about holding onto what’s important, with her kids growing up and her daughter not far off moving out.

Apart from wanting a colour TV, Kevin’s main priority is to pick out the perfect present for his crush Winnie, which amusingly “had to say everything without saying anything, and it had to be under six bucks”. When he goes to deliver his present he has an image in his mind of Winnie in a beautiful party dress, lovingly accepting his gift as the snow begins to fall. Instead, he is greeted at the door by an old lady, who tells him about Winnie’s brother who died the year before in Vietnam. This is a difficult time for the family, and they had to get away. Once again, life is messy. There’s sadness hiding behind apparent holiday cheer.

This being a Christmas episode, we have to end with some happiness, albeit bittersweet. The world of The Wonder Years always kept it real, so we don’t get snow. Instead it starts to rain on Kevin’s family, and “Dad just stood there”… but then the tension is relieved and the family start laughing and having fun together. Family is important. This, and Winnie’s gift to Kevin of a four-leafed clover, makes him realise something:

I think that’s something we all get wrong at one time or another. Some of us probably get that wrong every year. Christmas isn’t about things. It’s about people.

“In a world that changes too fast, the best we can do is wish each other Merry Christmas, and good luck.”

Good advice, so I’ll follow it. A Merry Christmas to everyone reading this, and good luck. Let’s all make today about the memories.   RP

Author of windowsintohistory.wordpress.com Co-writer on junkyard.blog Editor of frontiersmenhistorian.info
View all posts by Roger Pocock →
This entry was posted in Christmas, Entertainment, Reviews, Television and tagged The Wonder Years. Bookmark the permalink.

1 Response to The Wonder Years: Christmas