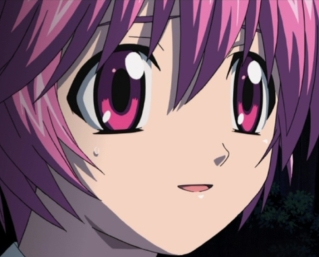 This was another tough episode to watch, but it was totally absorbing. For the second time this series I forgot to take screen shots for this article after just one near the beginning of the episode, an indication of how wrapped up I was in the episode. Those 25 minutes just flew by.

With Lucy persuaded to stop her attack on Nana with those trigger words again, Nana is added to Kouta’s unusual family and finds out about the other side to Lucy/Nyu when she offers Nana the rest of her food. Before long we are into flashback again, and the next stage of Lucy’s childhood, captured, confined and tortured, although something is still missing: we still don’t know what happened to Kouta’s family. However, at this stage the flashback is more about Kurama, and what brought him to the place he is today. We see how he was recruited by Kakuzawa’s son on the promise of doing something amazing, and ended up being the one who terminated the horned children at birth. When he says he doesn’t want anyone else to have to shoulder that burden it seems genuine. Out of all the “bad guys” he is the one who it is easiest to have sympathy for, despite him doing some horrible things, and that is because he takes no pleasure in any of it, unlike his boss.

This episode is about Kurama learning what making the tough choices really means. It’s one thing for him to shoulder the burden of terminating somebody else’s Diclonius child, but when it comes to his own it becomes an impossible task, and wavering between his two choices costs him the life of his wife, in one of the most shocking and tragic moments of the series. The problem is he is working as part of an institution that has at its heart a belief in the worthlessness of the lives of Diclonii, beyond some value they may offer. When it is discovered that the Diclonii only use their powers against human victims and are harmless to dogs, the question is asked: “what does it mean?” Maybe that the assumption that human life is worth more than the life of a dog is fundamentally flawed? I think that’s what the Diclonii represent. They challenge those kinds of assumptions but also shine a light on the damage caused by xenophobia.

By the end of the episode we have some questions concerning Kurama, but the answers are obvious. It’s not that I want to spoil anything, so if you haven’t worked out what’s going on with Kurama’s child then look away now. Knowing that he has saved his child and Nana calls him Papa, some viewers might make the assumption that she is genuinely his child, but it’s clearly a red herring. The key is one important piece of information we are given about #35: she is the only “confirmed third generation Diclonius”. That means #35 has to be his daughter, created when Lucy infected Kurama. She is the “strongest Diclonius”, with 26 visible vectors. What a hook for the next episode! Something tells me our heroes are about to face their boss level.   RP

This episode felt like two mini-episodes.  The first is about the confrontation between Lucy and Nana.  This goes as far as… nowhere.  Mayu manages to hug Lucy even though it could cost her her life, but what could have been a major confrontation ends up sending Lucy back to the childlike Nyu.  And suddenly it all made sense!  Why does she sound so little and cute?  Because she’s regressing to the safety of childhood when she was with Kouta on the happiest day of her life.  But it’s not real; it’s not the child version of her we got to know in the previous episode, but rather an adult’s interpretation of a child.  Lucy become Nyu in an almost infantile state but it goes right back to her happy time she spent with the one person who showed her kindness.  And he’s doing it again.  Mayu is also showing kindness, but it’s the balanced kindness that extends equally to Nana.  Kouta is focusing his affections on Nyu.  She is pretty darned cute, I’ll admit.  Meanwhile, in “part one” as I’ll call the first half of this episode, we learn that hangry is a thing in Japan.  That’s when you’re hungry and get mad as a result of it.  It’s actually quite a funny moment.  (Another funny moment comes when Yuka says 6 is no harder than 5, speaking of how many people can live in the house and Kouta seems to have to contemplate that!)  There’s also a tremendous beauty in how the mortal enemy that is Lucy, while regressed to Nyu, offers Nana food.  Equally of merit, is that Nyu is very perceptive.  She notices way back in the first episode how the seashell made Kouta sad.  She now notices how Nana gets hangry.  In both cases, she tries to rectify it.  And, especially in light of what we learned about her shadow selves in the last episode, in both cases, both of her eyes are visible.

“Part two” of this episode backfills the story of Kurama.  Recruited by his silver-tongued peer Kakuzawa, he accepts a position in a lab researching the Diclonius.  Are they, in fact, the enemy of all mankind, as Kakuzawa suggests?  To find out, they basically torture the naked and bound child Diclonius.  Considering the child is shot in the head, I make no assessment on whether I knew who that was, but regardless, I hated it.  It wasn’t even that she was naked, which contextually made sense in light of the danger she presented, but that she is bound and tortured as a child.  Those experimenting may not recognize her as a child; they see her as an enemy, a threat.  But she gets her revenge.  She approaches Kurama and simply says “thank you”.  Through the benefit of artwork, we see that she is touching his forehead.  He is blissfully unaware.  That is, until his own child is born, a Diclonius.  Knowing that Diclonius kill their parents by the time they turn 3, he realizes he has to kill his child.  His wife, who experienced a particularly nasty delivery, can’t take the stress.  She dies in his arms asking him to save their child, as blood pools around her body.

The background has been given.  We had a jigsaw puzzle in pieces but suddenly, over two episodes, we have an outline.  But then we get a mystery piece, hitherto unknown: #35, the ultimate killer.  So dangerous that its vectors, all 26 of them, can be seen.  Maybe I didn’t have the entire shape of this puzzle after all.  I have little choice but to press on.  ML

Read next in the Junkyard… Elfen Lied Episode 11

Co-writer on junkyard.blog. Author of windowsintohistory.wordpress.com. Editor of frontiersmenhistorian.info
View all posts by Roger Pocock →
This entry was posted in Anime, Entertainment, Reviews, Television and tagged Elfen Lied, Infant, Saeugling. Bookmark the permalink.