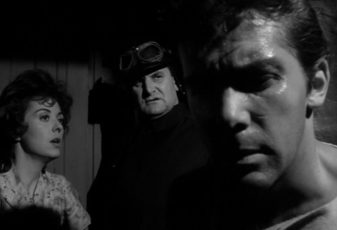 This British B movie from 1960 is melodramatic and tries to be Film Noir, neither of which are qualities I particularly look for in a film. I only ended up watching it because it’s an extra bonus feature on the first DVD box set of The Edgar Wallace Mysteries, made by the same production company during the same time period as that film series. Other than those factors, there is really nothing in common with The Edgar Wallace Mysteries. That’s not to say it isn’t worth a look, though.

The story is a straightforward one. Finley is a mentally ill young man who causes a road accident. He brings the victim back to his farm house, mistaking her for his deceased mother, and insists on caring for her, resisting all attempts from his sister to get help for the unconscious woman. It’s a sad story, and a long way from being the sympathetic, gentle portrayal of learning difficulties we saw in Urge to Kill. However, the writer is at pains to illustrate that Finley is not a bad person, and “up to now he’s always been gentle and kind”, but he has been damaged by his past. Little by little throughout the film we learn more about his childhood, suffering from the helplessness of his father abusing his mother, and being too young to do anything about it.

“He’d shut us in the bedroom. Face you alone. Those sounds twisted me like a knife.”

As his sister Molly explains, the biggest problem here is that he couldn’t get closure. His parents are dead, and his father moved away and died before Finley was “big enough to avenger her”. So the problem is compounded when a man shows up trying to help, and then Finley has a substitute mother and substitute father in the house to act out his “closure”. The man in question is Tom, a telephone engineer, who Molly sees working on some phone lines and asks for help. The problem is that she has to be cagey about what is happening, because she knows that her brother will be arrested if the truth comes out. Rather disappointingly, she only places value on herself as a protector. Caring for Finley makes her a woman, and the writer never quite challenges that, because there’s a predictable hint that she will end up with Tom eventually, who is going to “stay and give you a hand”. It’s pretty obvious where that is heading, and it’s all a bit depressing, as if the writer is trying to make the point that there’s no value in Molly’s life unless she’s being a mother figure or a wife. The extraordinary circumstances of her life do help to ameliorate that problem, but it would have been better if Tom had challenged her bleak outlook on life in some way other than her potential to be his future wife. It’s all there in the subtext, and it’s not very pleasant.

Lee Patterson obviously provides the most memorable performance here, and portrays Finlay as a man who is clearly not stupid, but whose mind is clouded by the confusion of a traumatic past. At times he is cunning and perceptive, and Patterson does well with the moments where he is wrestling with his inner demons, or fighting against the reality of the situation he has created. The best moment is the one from which my screenshot above is taken, when a policeman has turned up and is talking to Molly about the disappearance of the road accident victim in the background of the shot, while confused emotions play across Finlay’s face in the foreground. It’s just a bit odd that a Canadian actor was chosen for the role, which can’t possibly make any sense within the context of the story, and he makes little attempt to disguise his accent, if any. It’s an unwelcome distraction, but it’s not a massive problem in a film that is otherwise an engrossing 50 minutes of fast-paced, emotional drama. At times it’s quite miserable to watch, and the happily-ever-after feels a bit forced, but it works well as a portrayal of a damaged man, tortured by past wounds that will never heal.   RP

Co-writer on junkyard.blog. Author of windowsintohistory.wordpress.com. Editor of frontiersmenhistorian.info
View all posts by Roger Pocock →
This entry was posted in Entertainment, Movies, Reviews and tagged Crime, Films, October Moth, The Edgar Wallace Mysteries. Bookmark the permalink.