Posted on January 7, 2021 by DrAcrossthePond 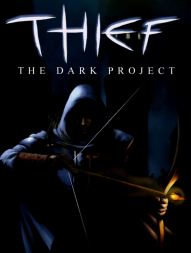 In September of 2019, Roger started a series looking at the “rights and wrongs” of Fanservice in anime.  I found the series informative as I was often one of the biggest critics of fanservice.  Recently it’s come to my attention that people who are looking at video games want to know how acceptable they are for a younger audience.  Video games are often cited as a reason people commit violent acts.  Rather than video game reviews every Thursday, I thought we should take a look at Violence in Video Games.  Today’s focus… Thief.

In 1998, Looking Glass Studios released the first in a series of games taking place in a dark fantasy world.  You played master thief Garrett for these first person perspective games.  The first game was revolutionary and utterly engrossing and I played it through more times than I can count.  It was one of the first stealth games I’d ever played.  Armed with a blackjack, lockpicks, sword, and a bow and arrow (with different attachments), Garrett plundered the locals of their hard earned gold, leading him to castles, underground caverns, churches and even some otherworldly locales.

Now, it might sound like an arbitrary choice to start Violence in Video Games with Thief and there hasn’t been a new Thief game since 2014.  The thing is, you’re playing as a “bad guy” so it offers us a way to look at the issues of violence in gaming a little differently.  Sometimes it helps that you play as a bad guy.  I’ll explain more of that in the coming weeks.

Why it’s not ok

We don’t want our kids brought up to think violence is ever acceptable.  The fact is, you can kill in this game and even in the first game, there is one mission where the objective is to kill someone.  To compound matters, you could opt to knock someone out, then throw the unconscious fellow into a pool and he’d drown.  Then there’s the obvious criminal aspect of being a thief; typically not something we want around for the house.  There’s also the alluring Viktoria who might push the envelope into fanservice, if not for the fact that she’s not quite what she appears.  From game one, there are some darker themes and you learn pretty early on that you are up against a creature, not a man.  And some of the places you travel to might be a bit unsettling.  Slicing, walloping, harpooning and stealing… all unfortunate elements of the game that is probably not a selling point for those young players.

The third game, Deadly Shadows, which came out in 2004, had a sequence in an asylum which was terrifying.  The inmates wander around twitching with cages on their heads in the most unnerving way.   By game 4, the 2014 release, there is even a segment that really earned it an M rating and should be avoided by younger audiences!  The worst part was, this didn’t add to the story; it’s there merely to make the world more “authentic” but it was hardly necessary.

Thief did a lot right.  The first game made it where, barring the one mentioned above, every mission could be won without even knocking a person out.  It challenged the player to think up new ways to achieve Garrett’s goals.  The arrow heads included a water arrow to put out torches, an arrow with knockout gas to…well, leave the people alive but out of the way, and a rope arrow to make those dangerous ascents into castle windows.  Thinking through a problem was the only way to solve the puzzles but that was only half the battle.  Patience was required to decide when to make a move.  A convenient noisemaker arrow could be used to send a guard down a wrong path allowing you just the right amount of time to get into a room and make off with the loot.  I made it a point never to kill and even tried to limit the use of the blackjack.  This was not a game to be rushed.  It needed finesse!

On top of that, the story builds much like Robin Hood placing you firmly against a lot of  really bad people.  The developers must have realized that there was a fine line between making the player a loveable rogue and a villain.  Garrett is a member of the Keepers, a secret society that is trying to make the world a better place.  Like the Doctor in Doctor Who, he is often a reluctant agent but does work for the greater good.

Finally, the graphics are dated but his might help make it less frightening and realistic to younger audiences.  The 2014 game was miles ahead of the early ones in terms of visuals, but it probably pays to start with game one.  (Thief Gold, which is the original game with a couple of extra missions, is available for $7 allowing a player to try the game without a huge financial loss if the game isn’t well received in the household.)

I never felt video games were the source of violence and have often stated that it’s up to parents to teach kids right from wrong, but I do think that there is a time for growing up and a time for holding onto innocence.  I would be remiss to say that a pre-teen should try their hands at Thief.  That said, I do think the game allows for a good balance for a player to think through problems and exercise restraint.  This is not a game where one runs into battle.  The story is fantastic, the setting even more so.  I would advise that the third game needs a degree of bravery, so a younger child should probably avoid even watching the asylum segment.  I think the last game is worth playing only to finish the series, but that one should wait for an 18th birthday.

I will always love that first Thief game.  I also put it in my top 10 chart of my all time favorites, but like I said, there’s a time and a place.  Thief might just have to wait until the player is old enough to truly appreciate the experience.  ML

Like Loading...
This entry was posted in Entertainment, Games, Reviews, Technology and tagged Thief, Violence in Video Games. Bookmark the permalink.