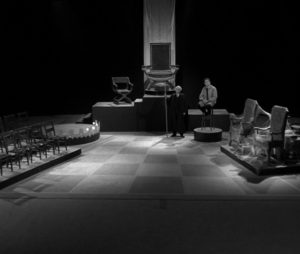 “I did a television show recently and they didn’t think it was very funny. I’m being charged with having no sense of humour.”

You could swear that writers Sid Green and Dick Hills knew this show wasn’t going to be well received. If not, this is the most extraordinary coincidence, because it’s the most metatextual thing I’ve ever seen. Gurney is on trial for making a comedy show that isn’t funny. Now, the laughs in this series are sporadic at best, but that’s not the point of it at all. Let’s take this one step at a a time.

As his defence council, Gurney gets Archie, an old music-hall comedian. He looks quite creepy, almost clown-like, with heavy stage makeup and a fake nose (at least, I think it is – apologies to the poor chap if he was born like that!). Archie’s jokes really aren’t funny and Gurney gets rid of him as quickly as possible in favour of defending himself, and that makes the point that traditional comedy, with which Gurney could be compared, has had it’s day and wasn’t actually funny any more, even in 1960.

The jury is then shown a clip from Gurney’s television show. This can’t be the sitcom he was filming at the start of the series, because no show has ever been made like this before Gurney Slade. We are in his mind, hearing his thoughts, while the actor sits there and gives us reaction shots for ages, looking thoughtful. The humour in the scene revolves around the idea of a man devoting his life to the design and manufacture of a countersunk screw, and Gurney of course has a good point when he mentions the expression of the man in the advertising poster. Nobody has the right to be that excited about that kind of screwing. Oh, and by the way the slang meaning of the term dates back at least to the 18th Century, so when Gurney uses the word “screwing” and it sounds like he’s hinting at a vulgar euphemism, I’m certain that’s deliberate.

Along the way, we have therefore already taken a swipe at the advertising media, and the screw-maker and male model are brought on as witnesses to demonstrate the absurdity of the advertising campaign. Unfortunately for Gurney, the screw-maker is an insufferable bore who (very amusingly) really does think screws are the most interesting thing in the world, and the male model has immersed himself in the world of screw making in preparation to give a “sincere” smile.

By far the best and most interesting segment of this episode is when a “typical television audience” is called to the witness stand. The opinion of the children is not sought. The father didn’t find the sketch funny, but kind of gets the point when he says it was “clever, very clever”. But the eye-opener, and the moment that really indicates that Green and Hills (in collaboration with Newley) understood what the reaction was going to be to their series, is the opinion of the mother:

“I didn’t understand what it was all about. Besides that I don’t think it ought to be allowed. Bad for kids.”

So she didn’t understand it, but she still has a strong opinion, mainly based on her misunderstanding. This is so prescient, it could be Mary Whitehouse stood there, talking about Doctor Who: The Deadly Assassin and completely failing to understand what she was watching, while treating everyone to her opinion of it anyway. Gurney is baffled:

“I don’t know how you can miss it. It was the theme of the whole thing.”

This really hits home: a writer goes to all the effort of doing something interesting, with thematic depth, and too many of the viewers don’t get it and switch off, only watching on a superficial level without engaging the brain.

The verdict is of course a guilty one, because the judge and jury all fail to understand the kind of show they have been watching. Just to make sure the writers take a swipe at everyone possible, the media is then shown in a bad light, trying to buy Gurney’s story and falling back on their plan B when he says no: a kiss and tell story from an old girlfriend. And of course the legal process is also shown in a bad light, with the jury making their decision for the entirely arbitrary reason of not liking Gurney’s nose.

So everyone involved in this seems to be doing their best to insult as many people as possible, but the insult of course does not extend to most of the viewers at this point. By episode four, “typical” viewers like the mother had already departed, so the audience is in on the joke. And the insult is delivered with great style. The court room is darkly cathedralesque and menacing, making the best possible use of the jarring switch to studio filming. The jury’s verdict is beautifully sung by the jury, who are actually made up of a male voice choir. And the punchline is simply sublime, with the executioner’s axe needing to be fixed with a countersunk screw, causing the judge to laugh at the irony of the situation and therefore tacitly acquit Gurney. It turns out screwing is funny, after all.

Our binge watch continues with episode five, at 6pm GMT today. “Would you repeat that?” That.   RP

Author of windowsintohistory.wordpress.com Co-writer on junkyard.blog Editor of frontiersmenhistorian.info
View all posts by Roger Pocock →
This entry was posted in Entertainment, Reviews, Television and tagged Surrealism, The Strange World of Gurney Slade. Bookmark the permalink.

1 Response to The Strange World of Gurney Slade: Episode Four