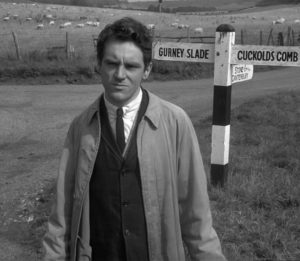 This is a very philosophical series. Sometimes you have to squint a bit to see the point that is being made, but there’s always an idea at the heart of each episode. This week it’s about the working life that Gurney has escaped, being a cog in the machine, the rat race, or the metaphor Gurney chooses: a worker ant.

Gurney recognises that he isn’t well suited to the life of hard work, as part of an organisation (“I’d be fired for idling”), but more troublingly he muses on what happens to the “idle ants” in life: “they eat them up, that’s it”. It’s not hard to see how this could be a reflection on the human condition, being eaten up by the societies and organisations we serve. Gurney has become a free spirit, and has walked away from all that. The point continues to be made throughout the episode, with a drama playing out in the background of the shot.

So Gurney goes to a farm and meets another talking dog. These are roles reversed, with the dog keeping three humans, two of which he “paired off”. In the topsy turvy world of Gurney Slade, the dog represents the farmer and the humans are the animals. The “pairing off” is clearly not going well, and shockingly ends up with two of the humans/animals plotting the death of the third, causing his car to crash. A worker ant has not performed to the satisfaction of the others, and has been dispensed with. It explores the concept in the cruellest way imaginable, and the contrast with the beauty of Gurney’s surroundings is stark. Life can be beautiful and harsh at the same time.

I found this the least engaging episode so far, and I think that’s because Gurney needs other people to interact with, even if they are products of his imagination. His world never quite springs to life if it’s only inhabited by talking animals and his endless internal monologue. That’s not to say there aren’t fun moments, but they are sporadic. Caroline the Cow, voiced by Fenella Fielding, is a highlight of the episode, as is John Bennett as Napleon, being defeated by a fly. The scarecrow singing Greensleeves is a bit creepy, although Gurney clearly doesn’t find it frightening, as he just sings along. It’s an impressive moment because it’s the first time we have seen an inanimate object interacting and moving in a visual way. For example, the statue head in the first episode was an unmoving object with a superimposed voice, so when the scarecrow starts to move it certainly gets our attention.

I haven’t spoken much about the humour in this series so far, but at times it is very funny indeed. In the first episode I loved the man living in the bin, who rejected Gurney’s vacuum cleaner (“no thank you, we already have one”). In this episode, I was amused by the huge effort Gurney went to, trying to close a gate, only for the camera to pan across and reveal an open field with no fence. There’s a lot of truth in that humour. The English countryside is peppered with old, rotting gates, no longer performing a useful function. I remember being quite fascinated by an old metal one when I was a child, which had gone completely red with rust and was so crumbly you could poke your finger through it. It had been replaced with a new gate, but still stood there, propped against a fence in the field it used to guard. It was surplus to requirements, left to quietly crumble away, no longer useful. I suppose we all end up like that, eventually.

“It’s not much fun being an ant, especially an English one.”

Join us in the Junkyard at 3pm GMT, when our binge watch will continue with the fourth episode of The Strange World of Gurney Slade.   RP

Co-writer on junkyard.blog. Author of windowsintohistory.wordpress.com. Editor of frontiersmenhistorian.info
View all posts by Roger Pocock →
This entry was posted in Entertainment, Reviews, Television and tagged Surrealism, The Strange World of Gurney Slade. Bookmark the permalink.

1 Response to The Strange World of Gurney Slade: Episode Three