I Want to Eat Your Pancreas (Review) 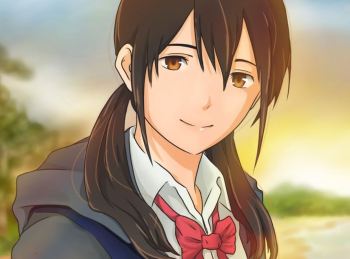 The title of this film seems to have been chosen to make people buying a cinema ticket or asking for the Blu-ray in a shop feel a bit self-conscious, but it does make sense and no, it’s not actually a film about cannibalism. Now, I need to say right away that it is completely and utterly impossible to write anything that anyone could possibly want to read about this one without spoiling things. Heck, I can’t even mention the main character’s name without dropping a spoiler, so in the unlikely event that you’ve come here to find out whether this is worth buying, then yes. Definitely. With that out of the way, what follows is written with the assumption that anyone reading from here on in has seen the film, or is happy to read a lot of spoilers and is therefore just a little bit weird (if you’re that person, fair enough, by the way – I’m not judging).

So any article written about this film (or the book on which it is based) is obviously going to have to deal with the enormous curveball it throws at us, with about 20 minutes to go. We are expecting Sakura to die at the end of the film, and we are prepared for that, but we aren’t ready for her to die early, and of something completely different. Instead of her gradual decline from whatever is wrong with her pancreas, she is brutally stabbed to death. It’s shocking, cold, meaningless. She dies alone, suddenly. Nobody gets to say goodbye. At first it made me angry, and I couldn’t see the point in it. I felt like I was watching something that was messing with my emotions for the sake of extracting some tears cheaply. But then I started thinking about what this movie is really about. OK, so my wife told me what it’s about, because she’s much smarter than me in that way.

Sakura is dying, and Haruki struggles to understand why she wants to do normal, boring stuff, and wants to do that boring stuff with him, instead of ticking off some super duper bucket list. Her reply is basically that everyone is going to die one day, and we’re not all being weird about that. There’s a great deal of pleasure to be extracted from normality. So her death drives her point home brutally. Anyone can die at any point, so in the end her illness was completely irrelevant, and she was exactly right to live her life the way she wanted to live it. As for why Haruki is the focus of her attentions, her world is divided into friends who she can’t tell about her illness, because they’ll just end up being weird around her instead of just getting on with the business of being her friends, and family who know about it and have already gone weird on her. Haruki is unique, because he knows about her condition, and doesn’t treat her any different, at least for most of the film.

To a certain extent that’s because he’s emotionally disconnected. His world is pretty much just himself. He has never had a friendship, and books are his life. He actually seems reasonably happy like that, and the film doesn’t invalidate his individuality. In fact, it shows that there is a middle ground, somewhere between (a) being yourself, to the exclusion of all else, and (c) defining yourself by how others perceive you, i.e. your friendships. There is a (b) between those two, and that’s what Sakura helps Haruki to find, partly post mortem, and I think there’s truth in that. It probably is the best way to be.

The last 20 minutes of the movie are tough to watch though. Boy, are they tough to watch. There is resolution, and closure, and Haruki faces up to his issues (as does Sakura’s best friend who was in the dark about her illness), but it’s hard to shake the feeling that Sakura and Haruki were made for each other in a way that transcends friendship or love and was actually something indefinable, and that’s probably never going to happen for Haruki again. I like how it was acknowledged by Sakura in her diary that her relationship with Haruki was tricky to pin down. She seemed to be driving the friendship with such confidence, but in the end she was being swept along by it just as much as Haruki was, and didn’t quite understand it herself either. Life’s like that sometimes. We try to slot the people in our lives into neat compartments, but in reality our relationships can sometimes be like Venn diagrams instead, and a word like “friend” or “girlfriend” doesn’t always do the trick. They certainly don’t for Haruki and Sakura. In the end, it doesn’t really matter. They are a hugely positive influence on each other’s lives, while it lasts, and that’s the important thing.

It’s hard to say how I felt about this movie in the end. I certainly adored everything up to the big twist in the tale, but the last 20 minutes tainted things in a way I wasn’t expecting, and I’m still not sure what to think about Sakura’s fate. I mean, I can see the point of it, but that doesn’t feel like enough to make up for the empty feeling it leaves you with. All I can say, is make absolutely sure you watch the coda after the end credits, because that does take quite a lot of the bleakness away. I suppose the best way I can describe the film is that it’s a work of art. Art isn’t always there just to please us. There are other emotions that can be stirred, and this one definitely stirs a lot of them. It’s kind of a masterpiece, but certainly a flawed one. There’s beauty in that.   RP

Co-writer on junkyard.blog. Author of windowsintohistory.wordpress.com. Editor of frontiersmenhistorian.info
View all posts by Roger Pocock →
This entry was posted in Anime, Entertainment, Movies, Reviews and tagged Dying, Films, I Want to Eat Your Pancreas. Bookmark the permalink.

1 Response to I Want to Eat Your Pancreas (Review)