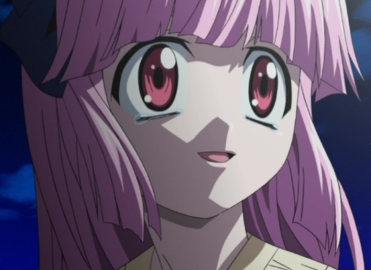 In the final episode of Elfen Lied there are some big encounters that have been held off for a long time. One of them is a non-event. As tough as Bando thinks he is, and despite having a powerful gun, it seems strange that his final battle with Lucy has been saved for the end of the series, because he’s still just one man, and predictably it’s over before it has started. Nana being reunited with Kurama is more interesting, because she is delighted to see him and still loves him. I previously referred to their relationship as a kind of Stockholm Syndrome, with Nana treating her captor as a father, but here the writer successfully shows the relationship as being much more genuine than that. Nana has had time away from Kurama and has learnt what it really means to have a family, but that has done nothing to diminish her love for her “Papa” or to question the meaning of that relationship. So it looks like a strong paternal connection really did develop between them, beyond a captive simply ingratiating herself with her captor.

That’s a problem for Number 35, who really is Kurama’s daughter. If you squint, I suppose you could read this as an allegory for adoption, maybe how an adopted child can mean just as much as a blood-related one, or perhaps the dangers of neglecting one child in favour of another. Kurama never had a chance to develop a bond with Number 35, who was so dangerous that she was kept locked away, so he compensated by becoming a father to Nana. It’s a tragic story, especially when Number 35 is heartbroken by Nana treating Kurama as a father, something Number 35 never had a chance to do.

Speaking of which, she’s not just “Number 35” any more. She is Mariko. This marks a change in tone in the final episode. Up until this point, she has just been the boss level enemy, a seemingly heartless killer. The obvious thing to do with that would be to have a big final battle between her and Lucy. Nearly all anime series would have done that. But not Elfen Lied. This is a series that has something more important to say. Mariko is named, and no longer just a number, and that signifies the way she is humanised for the first time (not the right word, but I don’t think there’s another one that fits). Meeting her father for the first time brings out the child in her, and the emotions that were previously locked away come out in a flood of tears.

“Warmth, love, joy, you had everything good taken away from you, and I took it.”

The biggest of the big encounters is of course between Kouta and Lucy, as it always had to be. This is Lucy’s chance to tell Kouta what she means to him, her only ray of sunshine in an otherwise “hellish nightmare” of a life, and also to attempt the impossible: to find the right words to apologise to him.

Just as there are no words sufficient to apologise for what she has done, there are also no words of forgiveness from Kouta. That can’t happen. It would have been trite. What he does instead is express his love for her and for the little girl he used to know. It’s a contradiction. It makes perfect sense.

And finally, as Nana talks about “so many wonderful things in the world”, there is the hint of Lucy’s return. A shadow at the door. A shell. A fixed clock.

This has been a story of hope, of family, of love conquering the most horrible adversity. Most of all, it has challenged preconceptions. There have been monsters in this series, but none of them have been girls with horns.   RP

Nope.  Just… nope!  I can’t accept this is how it ends!  I knew what was going to happen all along; it was the only way!  But I still don’t have to accept it or like it.

Let’s review… we have 22 minutes to tell most episodes.  This one extends into the credits until 24 minutes but that doesn’t leave a lot of room to wrap up a story this big.  We’ve got Kurama, 35’s father.  We’ve got Bando.  Lucy has to be figured out.  Yuka has to come to terms with Kouta.  Kouta has to come to terms with his family’s deaths.  What will happen to Nana?  Mayu?  I mean even the dog leaves me wondering at this point.  And to top it off, we have to get back to that battle between Lucy and Bando that left us hanging one episode earlier.  How can we fit it all in?

The answer is: cleverly.  For one, there’s no need to show a running shootout between Bando and Lucy because we’ve seen enough of it and we know Bando can’t win, so we open with two things. Nana has been saved by Kurama (Papa) and Lucy is standing over Bando having beaten him once and for all.  We flash to Yuka who is explaining to Mayu that Kouta had witnessed the murder of his father and sister, which means she’s known the whole time.  But it also gives us a chance to have her come to terms with her own selfishness about Kouta.  She understands he can never leave someone alone and in pain because they all remind him of himself when he was in pain and alone.  Mayu, for her 14 year old wisdom, realizes that Yuka loves Kouta.  It’s a sweet moment.

Back at … well, wherever they currently have #35 laid up and recovering, the scientist on duty gets off the phone with the Director and says “if anyone here isn’t human, it’s him”.  This proves to be true when he takes his wig off to reveal that he too is a Diclonius.  Not the surprise they made it out to be, though, since his son was one too.  Not completely expected, but not totally surprising either.  (This makes me think a second season would be needed to resolve that storyline… perhaps the Manga do that for us!)

Then we get to the showdown between Lucy and #35.  Here’s what’s really crazy: at this point, we’re only 1/3 of the way through the episode; just over 8 minutes.  And it’s a beatdown.  Lucy is left dead, eyes solid white, hanging over a ruined barrier, when #35 turns her attention to the man she just learned is her father.  (It’s during this episode, we learn her name is Mariko!  Wish I knew that earlier.  Every time I was referring to her before, I felt she belonged in The Prisoner.)  She sits on the ground, every bit the little child she would appear.  She sees Kurama and says “I’ve been looking forward to the day we meet”.  Sickeningly, he pulls a gun on her.  Nana tries to pull him away but refers to him as Papa, which bothers Mariko even more.  She tells him that all she wanted was for him to say “Mariko, I love you so much…”.  She goes on to say “You’re supposed to take care of me!”

For me, this episode was utterly heartbreaking.  It’s tough to watch when characters are beaten or when little girls are shown in ways that they shouldn’t be, but watching a child beg for love… what could be worse?!!?  Kurama does drop the gun.  He does hold his daughter and he walks away carrying her lovingly in his arms.  But he knows one of the scientists is within earshot and asks him to detonate the bomb inside his daughter.  As Nana watches from a distance, the bomb goes off.  There’s an incredible sequence like watching an old film as they die… and it’s over.  Mariko and Kurama are gone, Bando defeated, Yuka at peace with who Kouta is.  Mayu gets to be the child in the house.  And yet, we’re only 2/3rd of the way through the episode.

As the scientist turns his attention to Nana to get rid of one of the last Diclonius, his head explodes because, to my delight, head-popping Lucy has survived.  Now Lucy and Kouta need to wrap things up once and for all.  And to my utter delight, Kouta accepts her, even though he can never forgive what she did.  He even says that he can’t explain it, but I get it.  I completely understand his feelings.  He always loved that girl he met all those years ago and in many ways Nyu brought that girl back to life.  She was that person for him again.  And he loved it.  His knowledge of what happened means he can’t forgive her, but they hug and he can see past it.  And they kiss.  She then accepts her fate.

The episode ends with Lucy now in front of the military and they open fire.  Nana is walking up the stairs to their house saying “I have to go home.  My family is waiting!”  As the military open fire, Lucy’s horn is blasted off and a spray of blood fills the air with an amazing image against a full moon backdrop and a final shot of the place Kouta and Lucy kissed stands empty. 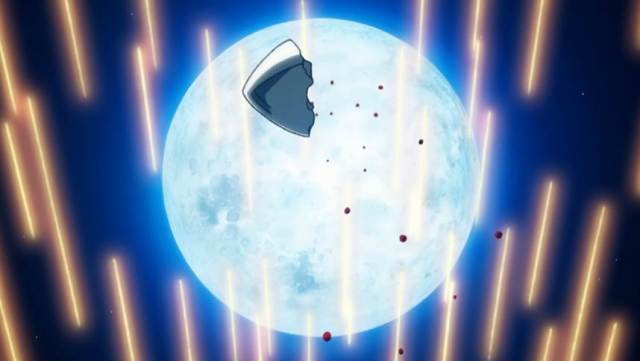 As the credits roll the story continues.  Wanta, the dog sits outside on a leash.  Yuka is getting things done.  Kouta sits on the floor holding the replacement shell Nyu gave him.  Nana and Mayu clean dishes and talk, the two children doing their chores.  Yuka sets the table adding one extra setting in honor of their lost friend.  (All the while that lovely music plays in the background… beautiful.)  Nana remembers all the lovely things in the world and Yuka once again plays mom reminding her to eat to grow up healthy.

And the moment I had prayed would come… the one that will live forever in my minds eye… the dog starts to bark.  Kouta walks out to see who is at the gate.  There’s a silhouette.  The music from the music box stops, just as the clock that Nyu had been working on begins to work.

Is it possible that she survived?  I’m an eternal optimist.  In my mind, there was the only person who it could have been… and she had come home!

I came into this series with zero expectations.  I’ve erased my preconceived notions.   I leave it with another recommendation for an anime that falls into a MUST SEE category.  And then I jump for joy, because I have one more outing with this group, in the form of an OVA episode… which I will watch tomorrow, after I’ve had more time to digest this marvelous piece of television history.  ML

Read next in the Junkyard… Elfen Lied OVA

Author of windowsintohistory.wordpress.com Co-writer on junkyard.blog Editor of frontiersmenhistorian.info
View all posts by Roger Pocock →
This entry was posted in Anime, Entertainment, Reviews, Television and tagged Elfen Lied, Erleuchtung, No Return. Bookmark the permalink.