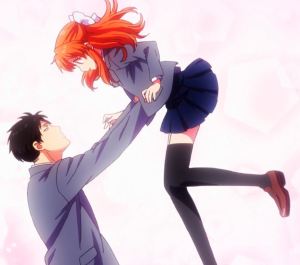 I’ll start this article with a question for anyone who hasn’t seen this show. What do you think would be the genders of the following characters:

(1) Mikoto Mikoshiba, popular but shy, gets carried away with the popularity and sometimes says inappropriate things, and then gets crippled with embarrassment.

(2) Yuzuki Seo, incredible at any sport, but can’t do teamwork. Goes into any game like a bull in a china shop.

(3) Yuu Kashima, tall and handsome, nicknamed “the prince”, idolised by almost every girl in the school.

(4) Mikoto Mikoshiba, the archetypal tsundere, falling in love with Kashima but often responding with violence.

Anyone who has seen a few anime series will probably recognise some familiar character tropes there, and you would probably expect: (1) female, (2) male, (3) male, (4) female. You would be wrong about all four, because this series gloriously subverts just about every possible gender stereotype. But the really clever bit is that the main character, Nozaki, is a manga artist, and he takes inspiration from his friends to create characters for his shojo manga work (a boy creating shojo manga, aimed at a female demographic, is already an unusual gender flip), but all his male friends get used as inspiration for the female characters, and vice versa, with just one exception.

Nozaki has no personal experience of relationships, but he has to get his ideas from somewhere, so he looks at the interactions and behaviours of his friends, a constant source of good ideas for him. At the same time, most of his friends help him with his work in some way, colouring in, drawing in the backgrounds or textures and effects, etc. This has the added benefit of giving them lots of time in his company, often staying over at his flat to get work done.

One important character is not gender flipped, and that’s Chiyo Sakura, a girl who has fallen in love with Nozaki. It reminded me a bit of the set-up for My Love Story!, with a diminutive girl falling for a big, hulking teenage boy, who looks tough but is actually in touch with his emotions, but the two series follow very different paths. There is sadly virtually no development in their relationship across the series, which was my main reservation about this, but instead Sakura’s crush on Nozaki is used to illustrate how his knowledge of relationships all comes from reading manga, and that doesn’t actually translate to the real world. He buys into his own character tropes and rom com scenarios, which just don’t pan out like that in reality, and in the process fails to notice the love that Sakura has for him. It’s a bit frustrating at times, but it’s played for laughs and is admittedly often very funny.

The gender stereotype flips are nearly all absolutely brilliant, and the beautiful thing is how accepted everyone is in this series. For example, Kashima is idolised by all the girls for her princely manner and looks, and nobody cares that she’s wearing a skirt. Even better, she’s not even used by the writer for a bit of lazy yuri romance. Instead, she gradually develops feelings for Hori. Oh, and by the way none of these scenarios are ever used as an excuse for fanservice. But I did have a problem with one character and that’s Hori. Here is where a gender flip really can’t work, because he’s the male version of a typical tsundere girl, and anyone familiar with that character trope will know that they often engage in a bit of comedy violence against their love interest. Surely you can’t just port that over to the opposite genders, right? Except that’s exactly what happens here, with Hori frequently physically attacking Kashima for one reason or another, to the extent that she is often shown with bruises or plasters afterwards. I found that very hard to stomach, and it was the one area where the humour fell flat. I would like to give the series the benefit of the doubt and assume that I was supposed to feel like that and the writer was cleverly highlighting the uncomfortable side of the tsundere trope, but actually it just comes across as lazy and inappropriate humour.

So what’s the point of the gender flips? Is it simply for the sake of doing something different? No, absolutely not, because the genius of this series is the way it illustrates the absurdity of the gender stereotypes we create for ourselves. The characters’ genders are swapped for Nozaki’s manga and it works seamlessly, and that’s because characteristics such as shyness, embarrassment, selfishness, physical prowess, pride and conflicting emotions are not gender specific. None of them are owned by one gender. At times this series is deeply flawed, but it has one hugely important point to make: stereotypes should always be challenged, and nobody should ever have to conform to those stereotypes. Most characteristics that get classified as “male” or “female” probably belong together in one box that just says “human”.   RP