Posted on January 26, 2021 by DrAcrossthePond 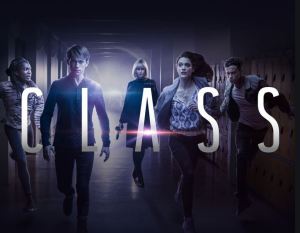 Class resumes and this week looks like we’re going to get some backstory around Tanya.  Tanya is missing her dad.  He died 2 years ago.  She’s sad and just before going to bed, gives his picture a little kiss.  When she looks up, dad is in the room with her.  And she’s not the only one getting some night visitors.  The whole of Cardiff seems to be full of these visitors from beyond the grave.  What’s going on this week?

For the third week in a row, I’m impressed.  Patrick Ness gives us an episode that looks at grief.  Tanya sees her dead father while Ram’s dead ex-girlfriend comes a’calling.  Mrs. Quill is visited by her dead sister – in human form, thus clearing up my earlier question about their true appearance.  The Lan Kin are a race that feeds on loss and guilt and sorrow.  They manifest their physical form to match a lost family member or loved one.  Then, when the mourner takes their hand, they are gobbled up; pulled away in the blink of an eye.  “That’s not even the third weirdest thing I’ve seen this month!”

Like I said: I’m impressed.  Taking on such big concepts is a thing Doctor Who typically skirts around because the Doctor is a whirling dervish that can’t stay still long enough to allow someone to grieve.  But Class gives us the chance to explore big emotions without having to take off to the next adventure.  There’s even another really well-done commentary when Tanya defeats her “dad” by taking his hand and instead of giving the Lan Kin grief, she unloads anger.  She’s angry at her dad for leaving them; angry for all the good times she can’t have.  The Lan Kin can’t pull her in because the creature has been poisoned.  The message is clear: anger is a poison; it’s bitter.  Sure, anger has a use, but it’s a negative emotion and, while it saves Tanya, it’s because of the negative role in plays in our lives.  For the fiction, it’s a good thing that she was angry.  The reality is: let anger go. Do not let it control and have dominance in ones life!  A valuable take-away.

The problem with the episode however is that it’s based on a conceit that Cardiff is the land of the dead.  No, I don’t mean those visitors from beyond the grave, but here’s the thing: the Lan Kin is a very web-like creature branching its tendrils out from Coal Hill all over the city.  These tendrils go on for miles in every direction.  Now, living in the States, maybe I’m spoiled.  I used to go to the diner at 2am all the time.  I can go to the store at 4am to get something even now.  My own street has cars going up and down throughout the night and we don’t even have stores here – the nearest one is a mile away.  So you’re telling me that not a single car drives around Cardiff at night to break those tendrils?  And that’s all it takes, because Quill goes and gets a bus to do just that.  If Cardiff is so dead at night, why are there people in the streets that April and Ram encounter?  Furthermore, the instant someone touches the Lan Kin, there’s no time to think; they get snatched away as quick as a frog’s tongue pulls in a mosquito.  So how does Tanya have time to poison dad and make him falter?  And when “dad” is pulled out of the room, bursting half the wall to pieces, why is mom later on the bed with Tanya looking at photos instead of putting up at least a curtain for the night, so there’s not a gaping hole in the room?  (And speaking of mom, why are some people wrapped in gooey tendrils but not consumed?)

Don’t get me wrong; this is a great episode.  My problem is that I am a stickler for there being some kind of logic behind a story.  I realize that Ram’s own summation of things should be indicative that I need to suspend disbelief but I would far prefer if I didn’t have to suspend it so much.  (Ram says that he’s had alien shadows and alien tattoos try to kill him so why should this surprise him?)  And Quill took the thought right out of my mouth when she sees all the people milling about at the end of the episode without remembering a thing: “That’s convenient!” Still, the cast is really coming together.  Quill, while reading The Hunger Games, puts the book down to ask “Did this really happen?” which caused me to belly laugh quite heartily.  She also refers to the Lan Kin as “really bad phlegm!”  Charlie tells Quill very matter-of-factly during the crisis, “by the way, Matteusz lives with us now” which also made me laugh.  And April reveals that her dad was a drunk who tried to kill himself with his family by driving their car into oncoming traffic, resulting in her mom’s paralysis.  (Speaking of that, the relationship between Charlie and Matteusz is handled maturely and far less provocatively than what we saw in season 4 of Torchwood, proving that the writers had the ability to do same sex relationships well on TV, they just tried to get shock value with Captain Jack and that just makes me lose respect for the final season of Torchwood that much more!)

“How could something so good ever last?”  Tanya may have summed up the problem facing Class as early as episode 3.  The truth is, this show was destined to be a short run because it was willing to tackle some big subjects and networks tend to be scared of those things.  Plus at most, the students only had 4 years before graduating – were they going to keep going to school or would we have recruited more people every year so they could move on?  Could it have worked?  Evidently!  But I can’t help but feel like the network wasn’t ready to commit to something so forward thinking. And that’s a shame because Doctor Who offers a rich universe to explore and the audience definitely wants it.  So all we can do is press on and hope.  Maybe one day… For now, see you all next week.  Class dismissed.  ML

Like Loading...
This entry was posted in Doctor Who, Entertainment, Reviews, Science Fiction, Spinoffs and tagged Class. Bookmark the permalink.