Violence in Video Games: I Expect You To Die!

Posted on February 11, 2021 by DrAcrossthePond 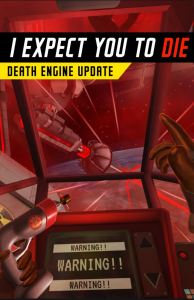 “Do you expect me to talk?”  “No Mr. Bond…”  In September of 2019, Roger (not Moore) started a series looking at the “rights and wrongs” of fanservice in anime.  Today, we continue that tradition with Violence in Video Games.  Today’s focus… “I Expect You To Die!”

In 2016, Schell Games released a VR game called I Expect You To Die!  When I got my hands on a VR headset, I looked up the best VR games to play and this came in at #2.  It deserved #1.  The game is essentially a series of over-the-top escape rooms where you play a secret agent on a mission to stop the super villain, Dr. Zor.   To give an example of the sort of fun you’ll have, after training with a marvelously British (slightly Carey Elwes-sounding) support person, you start the game in a car that’s being transported by plane.  Your object is to get the car off the plane because it’s a super weapon of Zor’s.  The thing is, if you open the car window, poisonous gas gets in.  If you start the engine, a laser comes down from the visor and if you manage to dodge that (physically moving out of its way), a bomb deploys.  The methods employed to stop you are ludicrous and completely hilarious.  That includes a stuffed bear holding a crossbow, a tank on railway tracks, and an assassin who plunges a staff through a train roof to stab you.  The methods of taking you out are varied!  Each mission will take a dozen tries before you get it right and even after you succeed, you can go back to give it another go, and you’ll find a new way to solve it.  It’s great fun and has offered me and my friends hours of enjoyment.  (Especially once where a friend of mine attempted to lean on the desk in the game that spectacularly failed to exist in the real world!)

Why it’s not ok

If you’ve been following these articles, I used last week to demonstrate that it’s not really the violence in the games that people need to concern themselves with.  Mario leaps on the backs of turtles, and I don’t see conservationists boycotting Mario Brothers!  And I don’t think Gamera is planning an attack to get back at Italians for Mario’s actions.  That’s because the intent is just cartoonish fun.  What’s not ok with this?  Hmm… There’s no language.  There’s no blood.  There’s violence in that you are murdered many, many ways.  The only concern that I could even conceive is the aforementioned leaning on something that doesn’t exist.  Probably best not to play VR in high rise apartments with the balcony door left open!  Oh actually, there is this: you can smoke a cigar and eat donuts!  VERY unhealthy.  (But luckily it’s in VR so no smell, and no cholesterol!)

It’s ok because it’s fun.  It’s also funny!  Some of the lines from your offscreen, mission-giving, support person are absolutely hilarious.  Even the training on how to do things will make you laugh; that’s all pre-game stuff too.  The game is designed to make you think and believe me, you will think.  You have no choice.  Oh, you can brute-force the odd puzzle here or there, but you can’t get away with that every time.  I recall my favorite mission is in a deep sea diving bell.  You have everything going against you: water pressure, limited oxygen and a fire burning to boot!  I opened a small cabinet to find it loaded with grenades and accidentally pulled the pin on one.  Luckily there was a quick set foam glue that I used to prevent the hand-release from raising and didn’t die from the grenade.  Woohoo! Alas, the window cracked due to pressure and… well… But what you need to take away from this is that the game was not reveling in violence for violence sake.  It’s creating a fun experience of being like James Bond with the same sense of over-the-top glee that one might expect of Roger Moore’s 007.

You can’t not love this game.   For the sake of a semi-review, this game is immense fun and incredibly creative.   The handful of missions are only a few minutes each but you’ll have to figure them out which might take a while!  But still, that’s perfect for having a VR headset on.  It would be far more difficult to play a game that takes hours per mission.  The ability to sit in one place makes this a top contender for one of the best VR games especially for people with a small room or limited mobility.  You can still play the game and enjoy every bit of it.  It retails for $20-$25.  And here’s the verdict: GET IT.

It’s a game that will make you laugh, think, and get excited as you come up with a new way to solve a mission.  Will you die?  YES!  Zor expects correctly.  But will you enjoy it?  Absolutely.  And the reason?  Because it has a sense of humor and doesn’t take itself too seriously.

Conclusion: As you can tell this series tried to exemplify the various forms of violence in a number of video games in the hopes of illustrating a point: it’s not about the violence but the way its depicted.  Pac-Man was eating ghosts and Donkey Kong was trying to pulverize a plumber long before modern gaming became a thing.  Violence has been part of the gaming world right after Pong came into existence!  But that doesn’t make violent people.  Even last week’s Grand Theft Auto, with its perhaps-flawed premise, will not make a monster of the teen in the house.  My father had a simple phrase that I will never forget: “Everything in moderation!”  My problem with GTA is that it was not moderate and it was depicting very real events.  Batman, Diablo, even Thief are moderate and even when they come close to crossing a line, they reel it in by being steeped in fantasy.

The concern comes down to where one draws a personal line: are you letting off steam in playing these games or is it a form of wish fulfillment?  If beating down a bad guy is a harmless release of steam, go for it.  How is that different than watching TV?  At least this is interactive.  But if there’s some deep seated desire act out a fantasy, let it be those silly things like playing at James Bond.  There are no super villains in real life, so immerse yourself.  But if the fantasy is one of doing harm to others, that might warrant taking a step away from gaming for a while and realize, there are other hobbies worthy of pursuit!

We’ll return for a few more video game reviews in the coming weeks, but we’ll still look at the violence in gaming.  There’s still a lot to talk about.  But right now, I learned that there are new missions for me to stop Zor, so I’m taking a trip back into this game to see what’s in waiting for me.  Time to see how many new ways I can be destroyed.  Do they expect me to die?  Maybe… but I expect me to laugh!  ML

Like Loading...
This entry was posted in Entertainment, Games, Reviews and tagged I Expect You to Die, Violence in Video Games. Bookmark the permalink.

2 Responses to Violence in Video Games: I Expect You To Die!