Brynhildr in the Darkness Episode 4 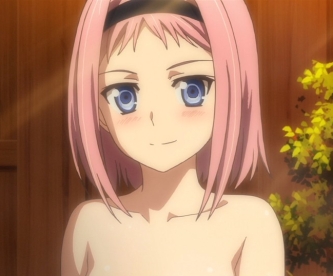 We are moving swiftly towards a harem anime here, and they are not generally known for featuring main characters with a lot of personality, but one thing that sets Brynhildr in the Darkness apart from a lot of the rest is that Murakami is actually a great character. We have already seen moments of resourcefulness and kind-heartedness, but this week he really becomes the hero. In a crisis he allows his intelligence to get him out of a tight corner, and he’s not a panicker. In about the space of a minute we see him figure out how to save Neko, defeat Saori, and even stomp on the alien creature that emerges from her body.

Unfortunately in the process we get one of those frustrating moments that tend to blight anime, where the main character learns something important and then forgets it again, and it’s really annoying to be back to square one with Murakami unsure of Neko’s true identity. Worse still, the bath scene was the obvious moment to reverse this, but that never happens, leaving us waiting to presumably see the reunion of Murakami and Kuroneko replayed in a later episode.

Kazumi becomes a fully-fledged member of the group this week, moving in to the observatory with Neko and Kana. She’s an ideal character to stir things up, and straight away we get a fascinating revelation from her:

“We both know you could move if you wanted to.”

As always this series adds layer upon layer of mysteries. Is Kana really faking her paralysis? There’s got to be more to it than that, surely.

This is the episode where the fanservice really kicks in, and here I think is probably the only area where the series compares very poorly with its predecessor. Elfen Lied had plenty of nudity, but it was almost always relevant to the plot and well-integrated. In comparison, we have here the ridiculous idea of an observatory for the exclusive use of a school club just happening to have a hot spring unisex bath attached to it. Maybe I just lack knowledge of Japan, but I would be pretty surprised if that’s actually a thing, unless the school wants to actively encourage teenage pregnancies.

If we can get past that bizarre set-up, what happens between Murakami and Kazumi does actually make some sense and is not entirely gratuitous. We must acknowledge that there’s a difference between shocking and gratuitous, and this episode walks the line quite skilfully. Kazumi probably feels like she is living her final few days, so it makes sense that she might want to let loose with her inhibitions. Murakami’s the only guy around, and has proven himself already to be something of a hero, so there’s probably an attraction there, but more importantly Kazumi just wants to have some fun. It’s also not entirely irrelevant to the ongoing story because it gives her the means to blackmail her way into staying at the observatory, and that brings the main characters together as a team all in one place, so there is narrative logic. Having said that, it’s uncomfortable to watch if you’re of a sensitive disposition, but then you probably won’t be watching this series if you are, especially as the episode starts with the two main characters ripped into pieces and another character turned to a steaming puddle of goo. This is not a series for the faint-hearted.

At times the pacing of this series comes across as a bit odd. It certainly feels rushed at times. Murakami and Neko find the pills and escape from the factory between scenes, and the school trip is dispensed with rapidly. More could have been made of that moment of euphoria for Neko when she finally gets to set foot on a beach. Observant viewers will notice the school trip is to the town and beach where Elfen Lied was set, and seeing those iconic steps again is a lovely bonus for the fans.

Once again, this is a great series at making us want to keep watching, with the episode ending at the point of Kotori’s arrival, an AA+ witch sent to infiltrate the group. The way this series is heading, I wouldn’t bet against her infiltrating them in the hot bath.   RP

“Turn back time now, or you’re gonna die!”  Well, that was a shock!  The way episode 3 ended, I thought I’d be in for a massive showdown and instead, before the opening credits role, we see Murakami has pierced Saori and seems to have the upper hand.  Then to further blow my mind, Saori obliterates Murakami, blowing him to smithereens too.  I think I need new mouthwash because my jaw was on the floor for so long, I needed quite a bit to get the taste out.  What the hell did I just see?  For a show that started off mildly entertaining, I’m totally sucked in now.  I’m actually glad one of my other shows ended so I have more time to watch this one.

Saori can turn back time alright but having overused her powers when she goes back in time she loses them for 24 hours.  Murakami and Neko are OK because everything is now just before they were both destroyed and they are able to tie her up with rope that appeared out of nowhere.  I utterly love when the good guys extend the hand of friendship to the potential bad guys and we have a chance for the witches to all join forces.  Why not?  We could use three not-so-Stygian Witches working together, right?  Alas, the bad guys who sent Saori out decide to pull the plug and she dies a horrific death.  Then one of my creatures, I think a child of Yog Sothoth (H.P. Lovecraft) shows up and starts crawling along the floor.  All teeth and eyes, and what does Murakami think to do?  STEP ON IT!  I don’t know!  I often think if I lived in an area with tarantula (which thank every god anyone can come up with to pray to, I do not) how would I kill one if it were in the house?  Surely you can’t step on it.  It would be like stepping on a small dog.  Shotgun?  Flame thrower?  Throw a couch at it?   Stepping on this thing seems wooly thinking to me, but there you have it.  He does and I fear he’s going to be smelling that thing on his shoe for episodes to come!

Anyway, the good guys get the medicine that they set out to get for Neko and Kana.  They come back to the astronomy club room where Kazumi came to share her last pill while waiting.  How nice!  By the pricking of my thumbs, there are three witches after all! (There was nothing I could do to get that to rhyme!)  Everyone cleans up and I thought it was a nice touch that Murakami was wearing a t-shirt while Neko was wearing his shirt. They establish plans for who can stay where and I’m suddenly reminded of a Quentin Tarantino movie.  See, sooner or later, someone from the school will show up and see a couch covered in blood, because no one is making a move to clean up Kana’s rendition of a scene from a Stephen King flick.  Now, in my mind I have dialogue going on in the principal’s office where Murakami is being asked in some particularly harsh tones, “do you see the sign on the front of this school that says ‘dead witch storage’?  No, you don’t see a sign than says ‘dead witch storage’ because storing dead witches isn’t in our friggen charter!”  Alas, while I want this scene to play out, I suspect it will only ever happen inside my head.

Less made up is that Kazumi seems to know something about Kana that no one else does: she can move if she wants to.  That’s interesting!  You’d wonder why she didn’t move when the house was on fire.  Or did she…?  Could she have been responsible for it all along?  Speaking of things we don’t know, now that time has turned back, the biggest revelation of the last episode, that Neko is in fact Murakami’s childhood friend, has been forgotten again.  This is an utterly tragic loss that has me using another shot of mouthwash, because my jaw hit the floor again with such a revelation getting erased.  We have to wait for this revelation to make another resurgence.  It surely must!!

Then we get more about the group who enjoy strapping naked women down to tables and melting them.  (Surely a hobby that hasn’t made it to the States yet.)  The lead villain has a holodeck to sit in a tribunal setting where he is given a stern lecture.  (“Do you see the sign on the front of this tribunal that says ‘melted witches storage’…”)  But he’s got a plan. He hires the same girl who played Ms. Asahina in The Melancholy of Haruhi Suzimiya (I mean, it’s the same animation, down to her ample… assets!) and has her infiltrate the group as the awesomely named Kotori Takatori.  (I’ve been saying it over and over, partly to try to spell it but also because it sounds like the noise you make when you’re little nephew won’t eat his veggies and you choo-choo-train them to his mouth on a fork.  kotoritakatori kotoritakatori kotoritakatori kotoritakatori choo choo!  There’s a soothing, melodic sound to it that makes even the bad things melt away.)

Author of windowsintohistory.wordpress.com Co-writer on junkyard.blog Editor of frontiersmenhistorian.info
View all posts by Roger Pocock →
This entry was posted in Anime, Entertainment, Reviews, Television and tagged Brynhildr in the Darkness, Lost Memories. Bookmark the permalink.

1 Response to Brynhildr in the Darkness Episode 4