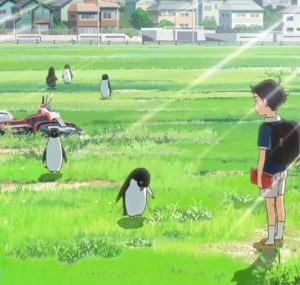 What connects penguins that are appearing in a Japanese town, and seem to be manifested out of random objects by a mysterious beautiful lady, and a strange sphere of liquid floating in mid air? That’s the question facing young boy Aoyama, and he loves a mystery because he’s a science enthusiast, and sets about investigating the two seemingly unconnected mysteries thoroughly, making observations, taking measurements, and recording all his data. He is helped by his best buddy Uchida, and a girl in his class called Hamamoto, who is his only rival for cleverest kid in the school. All three of them suffer the frustrations of bullies interrupting their happy lives of scientific investigations.

This might sound like a weird premise, and the film really embraces the oddness, revelling in incongruous sights such as a can of drink morphing into a penguin in mid air, but all of that is tempered by a strong grounding in the lives of these kids, and a focus on friendship. It shows how a strong bond can be made by spending time together in the pursuit of a common goal, and before long the children’s observations of the strange sphere double up as social gatherings for them. The film takes place during the summer, and strongly evokes childhood memories of long, hot summers playing with friends.

Aoyama is a great character, a clever little kid who is clearly destined for greatness. What I liked about him most is his honesty. His quest for scientific truth gives him a strong philosophy of openness and questioning in the wider context of his life. When he figures out that one of the bullies has a crush on Hamamoto, he simply tells him it’s OK, and to speak his mind. There is nothing to fear from the truth. Amusingly he does this in front of Hamamoto, who has a crush on Aoyama. But Aoyama makes it clear that they are not “lovey dovey”. It’s rare in these anime love triangle situations to see somebody put their cards on the table so openly, and cut through all the doubt with a simple statement of facts. Aoyama develops a crush on the mysterious lady instead, partly because he’s at that age where boobs are becoming a fascination (and he’s hilariously frank about that), but also because they form a strong friendship and he sees her beauty in more ways than the obvious. It’s a very positive portrayal of a friendship that ignores the barrier of an age-gap.

The animation is at times breathtakingly gorgeous, particularly the scenes of the mysterious watery sphere floating in the air in the middle of some beautiful countryside. At times the use of CGI becomes incongruous, which even spoils the opening and ending of the film a little bit, but a failure to seamlessly integrate different styles of animation is a problem most anime fans will be very familiar with and will be able to gloss over. The dub is excellent, with Gideon Modisett’s matter-of-fact delivery of Aoyama’s lines in particular absolutely perfect for the character. At times the lip-synch isn’t great, as if the dub script needed a few more tweaks to fit the mouth movements better. Ironically dubs are often more concerned with getting that right than the original Japanese voice-overs, but I do feel that it momentarily snaps the viewer out of the narrative when it’s too noticeable that a character’s mouth is moving and no sound it coming out.

This is described as sci-fi, but it does lean heavily on the magical. There is a strong sense of wonderment, which Studio Ghibli fans will appreciate, and I think the point here is that it’s admirable to observe, theorise and learn about things in a scientific way, but ultimately the universe will probably keep some of its secrets. I’m not sure I entirely understood the explanation for what this is all about, and I’m not even sure the explanation was really there beyond Aoyama’s eureka moment about how the pieces in the puzzle he is investigating fit together, but I don’t think there’s a problem with a story leaving us with questions at the end. It preserves some of the magic and the beauty of the film. If you want to bring a little more magic into your life, and perhaps recapture some of that joy of long summer days of childhood, you’ll want to take a journey down this penguin highway.   RP