Brynhildr in the Darkness Episode 5 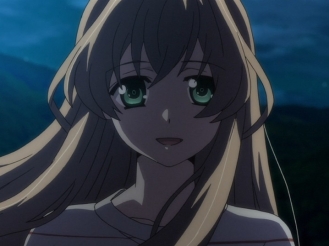 The mood whiplash that we are starting to expect from Brynhildr in the Darkness plays out this episode in the opposite direction to last week, with the episode starting on a more light-hearted note before moving into battle territory. But the character stuff definitely has an edginess and sadness to it that stops it from becoming too much of a light relief from the drama.

Kazumi continues to pursue Murakami and does so in a way that is a little bit sick, reflecting the extent to which she is troubled and damaged by her past. It might seem shocking, but I think it is actually a realistic portrayal of a girl who has been through a terrible ordeal and knows she probably doesn’t have long to live, seizing any chance for happiness and doing so in an inappropriate manner. Note that when shown from below, her dress forms an oval shape surrounded by what looks like teeth. If you don’t know what that represents I won’t spell it out, but let’s just say the same motif was present last week in the form of the alien creature, and it spells out danger for Murakami. Although Kazumi’s antics are uncomfortable to watch, she is certainly making the greatest impact at the moment, and of all the characters she’s the most flawed personality and seems the most real.

That’s important in a series that is increasingly defining the female characters by their cup size, something that is depressingly common in harem anime. Into the picture this week comes Kotori, who is defined by little other than a huge chest and a gentle personality. Depressingly, we get those “boing” sound effects when gravity takes effect on her disproportionate figure. Sometimes anime seems to be stuck in a rut that brings to mind a Carry On film, or the Benny Hill Show. Luckily her arrival does represent a clever bit of misdirection. Last week we cut from a shot of the bad guys talking about sending an AA+ witch after the escaped witches, to Kotori arriving at the club, presumably to infiltrate, but it appears to be just coincidental. Instead we have Kikako with her very impressive oral fire power, and the tragic death of Shino. Although she was introduced and dispatched in the space of a few minutes, her interaction with a stray cat was enough to make us care for the character, and feel sad at her demise.

This does all beg the question though: these witches all seem to know each other from the lab, but nobody knows Kotori. Could this be a double bluff? Her power is certainly an interesting one. A lot of the fun of this series has been discovering the new powers one by one and thinking about their implications and limitations. In contrast with Elfen Lied, their powers are much more strictly limited, which gives the good guys less of an advantage. Kotori is a good example because her teleport swap is a formidable power but she can only do it once before she hangs up. That brings an extra level of intelligence to the series because the protagonists can’t just fight battles by relying on superpowers. They have to use their brains as well and really pick their moments, especially as they are always lower-grade witches than their enemies. It has to be a triumph of intelligence over brute force, and that’s also strongly represented in the character of Murakami. The only problem is that Kana’s predictions are not being handled well by the writer at the moment. Murakami responds to them in a thoughtful manner, but it’s just a veil of intelligence in the writing. It generally only makes him aware of a risk rather than informing his decisions much, so her predictions are achieving little other than ramping up the jeopardy for the benefit of the viewers. That undeniably works well in dramatic terms, but it’s always one step away from being a fully-utilised narrative beat.

I probably haven’t praised the artwork in this series enough yet, and the horror of the final scenes of this episode takes place against the beautiful backdrop of a lake at sunset. Our second big battle awaits, and another great cliffhanger demands that we tune in again next week…   RP

Kazumi is rapidly growing on me.  Her sexual teasing is designed to completely derail Murakami and it’s hilarious.  It’s not even that she’s really sexual, but she sees how off-putting it is for him and she commits to it.  This becomes insanely funny right from the moment the episode starts.  Murakami protests about her comments and puts his foot in his mouth instantly with “the price has to fit the experience”, as if seeing Kazumi would not warrant “the price”.  He is promptly kicked in the face.  “You need to recognize a good thing when you see it!”  True story!

But the questions begin to ramp up in me.  Where was the astronomy club in my school?  Are only Japanese girls interested in it, because I was all about space growing up!  Is he the only guy in school with an interest in the stars, and if the rest of them knew who was in the club, wouldn’t we have a school full of astronomers?  More importantly, knowing things are weird, wouldn’t Murakami check everyone’s necks for harnests?  I would!  And am I spelling that right, because now I see the word “nest” in the middle of it, and suddenly I know where the mouthy creature lives.  Perhaps Murakami is not the sharpest katana on the mantlepiece is he?  I mean, they just worked out that they have a little time to live and his first thought is to “take advantage of the downtime” to go stargazing?  Sure, that’s a half-decent euphemism if he didn’t mean it completely literally.  And has he worked out yet, after stepping on Squishy, that the alien 5 year old Neko told him about could be on the bottom of his shoe?

Then just as I was questioning why Kana couldn’t see Kotori Takatori was a double agent, she has a vision of just that.  And Murakami sees the harnest.  So two of my questions got answered.  We then find out that Kotori’s special power is teleportation but that made me wonder if she would telefrag her newfound friend!  What, telefrag?  Oh, well, here’s a cool side-story.  I used to play the outstanding Quake 2 with the Extremities pack enabled.  Lord, they were fun times indeed.  Here’s what you do: find out where your best friend set up his teleporter, then set yours right on top of it.  The moment you hear the sound of him teleporting, you teleport to that same spot.  Boom you rip his body asunder from the inside out, fragmenting the body all over the place.  See?  Teleport/fragment: telefrag.  How could she do it in this story?  No clue but we are also introduced to a girl who opens her mouth and builds up a Yamato cannon blast.  What, Yamato cannon?  Oh, well, here’s a cool side-story.  I used to play the outstanding StarCraft and the Yamato cannon was a massively powerful cannon that did loads of damage.  Utterly devastating.  Kikako is determined to kill Shino with her cannon blast because Shino has the ability to hear things from afar.  (Think: Horton…)  In a Highlander flashback, I’m reminded that “there can be only one” and I think perhaps all the witches have to die and the bad ones have been brought up on reruns of Highlander.  So far, I have no idea about the motivation behind these bad guys.  Maybe they are just jealous that they never had unisex bathing pools…

Overall, I found this episode less exciting and it didn’t even compensate by being funnier either.  It opened up brilliantly, and then became a trip into exposition and what might be called “harem anime” where one guy has a harem of beautiful women.  It’s probably one step removed from that term because it lacks the love interest.  In fact, none of the girls seem that interested in Murakami at all.  (Good God, maybe I did live this life!)  Kana seems to insist he’s a pervert and doesn’t care if he dies (although kudos for the internal monologue that figures her out), Neko seems completely focused on helping other Witches, and Kazumi just has fun making him blush.  (Although again, kudos for the scene when Murakami intentionally provokes her only to grab her arms and ask her important questions!)

Don’t get me wrong, I’m on the event horizon of this black hole and I can’t escape now but I sure wish it had a bit more consistency in the story telling.  And I do wish the artwork for Kikako didn’t look so much like a character from Dragonball Z.  Still, there’s only one thing to do now.  (No, not go to the hypnotherapist to see if I have repressed memories!)  Onto the next one…    ML

Read next in the Junkyard… Brynhildr in the Darkness Episode 6

Co-writer on junkyard.blog. Author of windowsintohistory.wordpress.com. Editor of frontiersmenhistorian.info
View all posts by Roger Pocock →
This entry was posted in Anime, Entertainment, Reviews, Television and tagged Astronomical Observation, Brynhildr in the Darkness. Bookmark the permalink.