The Doctor and the Enterprise

Posted on March 9, 2021 by DrAcrossthePond 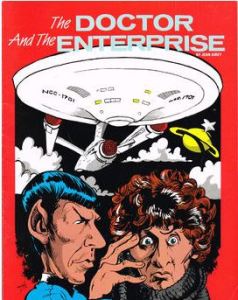 Let me start this article by saying that I don’t usually do a lot of research for what I write.  I write from the hip, or from the heart, and it’s based on how I feel about a given subject.  This one, due to the unofficial nature of the book, I did a little research on… and I found some weird things.

Back in the mid to late 80’s, I started going to conventions.  They were glorious places where people gathered, all of whom loved all the things I loved.  We bought toys and took photos of celebrities and if we were feeling brave, made friends.  (Or upon occasion, we’d be “agonized” by Klingons…)  Back then, I didn’t have a lot of money but, to quote John Candy, I’m still a million bucks shy of being a millionaire.  But when you see a book with Tom Baker’s Doctor having a mind-meld with Mr. Spock, you are ready to dish out what little cash you have!  In this case, a whopping $9.95!   Now, what I have learned is that this book has gone through a number of iterations. My copy is a red one, pictured above.

The idea is rather cool: the Enterprise is wrapping up it’s original 5 year mission when something happens.  Unable to reach Starfleet, they end up with a large blue box on their transporter pad and discover they are not even in their own universe anymore; they are in the Doctor’s!   And right away, they are attacked by Sontarans.  This leads to a lot of fun, especially as Kirk has to cope with such an enigmatic personality that seems to be bonding with his best friend.

The story is broken down into maybe a half-dozen chapters complete with recaps called “What’s happened so far”, which allowed me to read this comfortably over the Christmas break.  It shows all the markings of a fan story though and in retrospect it’s amazing that anyone bought it – not because it isn’t good, but because fan fiction is free on the internet these days – but don’t forget: this was the mid-80’s.  That said, it’s equally amazing that it ever saw the light of day considering copyright issues.  This has Sontarans, Daleks, the TARDIS, the Doctor, Kirk, Spock, Bones and the whole cast of the original series.  It’s both immensely fun and full of great (albeit cartoonish) artwork.  The best piece of art made it onto the 1983 edition of the book, listed here (external link).

If I took issue with the story, it’s the Doctor himself.  The author clearly knows the Star Trek cast well but it felt like the Doctor was a bit harder to nail down.  In fact, early in the story, Spock explains to McCoy that the Doctor “would not object if you refer to him as Dr. Who.”  He might not, but the fans would.  Also, Vulcan exists in the Doctor’s universe, but it’s not the Vulcan of Power of the Daleks.  Rather, it seems to be the same Vulcan that Spock is from but it’s been destroyed.  The impression I got was that the author was a fan in the US like me, who wrote with the limited knowledge we had access to back then.  Trust me, I was no different.  And considering the author gets so much right with the Enterprise crew, I could be lenient on the rest.  The Doctor is not an easy character to write without extensive knowledge of the “voice” of the character.  Kirk however, is Kirk, complete with getting into trouble because he ogles a woman.  McCoy is as grumpy as every and I could hear his voice as well as Spock’s.  The Kirk-Spock-McCoy trio is done very well indeed.

Now, knowing how much this book meant to me, I would look for it at subsequent conventions but discovered that the versions available referred to the Enterprise crew by titles.  One salesperson told me it was due to copyright law, and you could no longer get the version with their names in it.  I dread to think how they refer to Doctor McCoy then without confusing the situation between “the Doctor” and “The Doctor – the definite article you might say!” Jumping to today, I perused the article and it supports that claim showing the Captain and the Scientist for Kirk and Spock respectively.  I won’t reprint what the author has said, but it is interesting to note that I may have a happy gem on my hands considering the issues that the publication had.

What I don’t understand is why some of the reviews are so unkind.  Granted, this isn’t top quality stuff and its clearly a fan-fiction story.  But both Trek and Who have had some awful writers in their time and that’s all canon!  I get it though: like many SF fans, I like to think that everything I read of a given universe is part of the actual saga, but that’s not going to fly all the time so we have to use our heads.  Look at the final Trek episode and jump to Star Trek III, just three “stories” later for a prime example of how things change.  Spock says he has never seen a consciousness transfer like what Kirk goes through in that final story, yet his own people apparently performed that same thing in their past.  Yeah, time had gone by and things changed, but that’s canon!  And I won’t take anything away from that idea.  It’s still fun regardless of the damage it does to the lore of the series.  This does no damage to the series.  This is a fun trip with characters we enjoy being with.  To view it any other way is a mistake.  Enjoy it for what it is!

Is it worth the $10 I paid for it?  I’m certainly not complaining.  Amazon lists it for $20 now and I don’t know if I’d be ready to pay double for it but I sure don’t mind having reread it.  Some of the artwork alone is worth it.  I just wish I had those prints.  It won’t spark off a series, but it might spark off some fun discussions! ML

9 Responses to The Doctor and the Enterprise