On Target: The Crusades 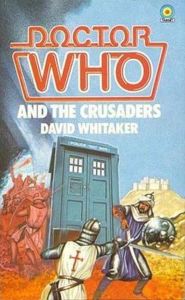 How I remember it!

This Christmas, my wife surprised me with a Doctor Who book that I’d never seen before.  Or, to be more precise, I’d never seen it like this before.  Many, many years ago, I’d read The Crusades in what I believed to be its original Target form.  I was, and remain, a devoted fan of the Target novels.  What I was used to had the classic logo followed by “And the Crusades” with the author’s name displayed below it.  That’s what I read many long years ago!

When I unwrapped my gift, I was dumbstruck!  What was this?  Would this be a new series of the original books that I’d start collecting all over again?  The cover was a bit of a surprise.  Where was the Target logo?  Was this even the same book?  I immediately went into my library to compare the two.  Yep, same book!  The only difference was that the cover art was different and it wrapped a hardcovered volume.  Well, it had been decades since I’d read it… why not try it again?  In fact, it has been a long time since I’ve read any Target books beyond the most recent releases…

It seems this is the year that the universe has decided to remind me that I am getting older.  It’s the second book lately where the font was just a tad too small.  I compared that with the original Target book though, to see if it really is my eyes, but the Target one looks fine.  Unlike the recent Lovecraft graphic novel, I did not need any aid in reading the book but I did think the font could have been increased slightly.  Superficially, the cover art is different, but aside from font size and book cover this is the same book I’d read before.  Still, I was curious about how the book would look without the slipcover and was pleasantly surprised.   I think we’ve all been told not to judge a book by its cover, and this is no exception.  It’s what was under the cover that looked so nice.  Ah, life lessons as told by Target books.  You never know when those lessons will turn up next!

As for the content, I’ve been thinking of revisiting the Target range anyway and this is a good starting point.  These books were among my favorites of all time and I completely credit them with turning me into an avid reader from childhood.  But The Crusades was never a favorite story of mine; I got hooked on Doctor Who because of the character and the monsters.  This story has very little of either.

David Whitaker gives us a nice prologue with an introduction to the characters and I think if you’re a first time reader, that’s a welcome addition.  Unfortunately the Doctor’s attempt to explain why they can’t change Earth history but can change that of other planets leaves something to be desired.  We are then told that the Doctor misses Susan who stayed behind in a previous adventure to be with David Cameron.  Who??  I went online to make sure I hadn’t had a memory lapse (I mean, aging and all that…); his last name was Campbell.   In chapter one, there is also a reference to the “chronicles of Doctor Who” which also had me asking, “who?”

Now this is a damned nice looking book!

Barring these oddities, the story is then broken into 8 chapters and each is pretty clear on what is happening.  In the first chapter, Barbara is captured and in the second, the Doctor steals some clothing while King Richard turns down a rescue attempt.  By three, the Doctor changes Richard’s mind while Barbara is making a fool of El Akir, the main villain of the story.  Ian attempts to find her but arrives too late!  By chapter 5, King Richard confides in the Doctor but later believes the Doctor broke his word and our hero never gets to explain himself.  Barbara escapes but is recaptured in chapter 6, Ian has a run-in with Ibrahim who has a thing with ants and honey, and by Chapter 8 everything is neatly resolved.  A very thoroughly categorized book.  It flows, certainly, and the televised scenes that still exist fit well within the pages of the book.  But I was left wanting a little and it took me a day or two to work out why.

The Doctor has very little “screen time” and the book is exposition-heavy.  That may not be a bad thing but it does wear a little heavily especially considering that, when the dialogue is present, it is strong.  I think Whitaker captured the voices of the crew very well but we don’t get to hear them enough.  It’s as if the writer wanted to tell us the story himself, but I liked the books to be the story.  (Think of it as a person sitting and telling you the play-by-play.)   That said, there’s a fantastic sequence in chapter seven where we have a discussion about other cultures and religious beliefs.  This is one of those moments that make me applaud the series.  It alone makes a huge impact on my enjoyment of the book because it’s illustrates cultural sensitivity and I think it’s important that we don’t forget it.  Whitaker does a great job writing about this and I think of all the children who learned something about other cultures from reading that sort of thing.  (Speaking of illustrating things, this book has a handful of illustrations which, for the life of me, I had not remembered in any of my Target novels!)

The ending of the book has that magic that so many of those Target books had.  Ian tricks some people to allow him to “kill the Doctor” and they slip into the TARDIS and leave.  I don’t know what it was about those books but they always seemed to have those endings that made me smile.  I never ended one of the stories feeling blah; I always finished with a smile.  (I think that was how the 2005 reboot won me over; that first episode left me smiling from ear to ear!)

Was this one of my favorites?  No.  As good as Whitaker typically is, this one just felt like a “Doctor Lite episode”, to coin a modern phrase, but it sparked my desire to revisit some of those other classics.  Stay tuned for more in the coming months.  ML

Like Loading...
This entry was posted in Books, Doctor Who, Entertainment, Random Chatter, Science Fiction and tagged Target. Bookmark the permalink.

7 Responses to On Target: The Crusades