The Outer Limits: The Children of Spider County 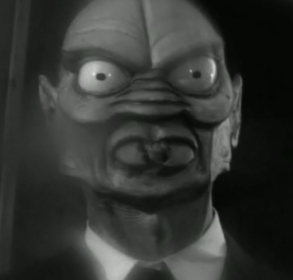 When I was about halfway through this episode, I thought to myself: this is such a weird show.  I used to love it as a kid, but boy is it “talky”.  But then it hit me.  It was like those “Weird Tales” magazines I used to read.  They had strange stories the likes of which I just don’t see on TV anymore.  Yeah, they are heavy on exposition, but they probably had a very limited budget and had to be very creative with limited resources.  And The Children of Spider County is no exception.  With barely any special effects to speak of, they still pull off an entertaining science fiction story.  Not just that, they introduce us to the original Fox Mulder!

The unnamed Fox Mulder character works for the Space Agency in their investigative division.  He wants to believe.  He’s trying to find 4 missing dudes and identifies a fifth who he needs to go see.  Deep down, without his Scully, he knows something is up with this guy.  He does some detective work and finds all these guys came from a town somewhere in the northeast… a town called Spider County!  And my first thought was: is that a real place, why is it called that, and why is it so close to where I live?  Is it time to move?  This preoccupied far too much of the episode to make me comfortable.  I determined it’s best not to think about it and move on.  I still refuse to investigate further!  Anyway, back to Mulder… he has an easy time stalking these on-the-lam criminals.  Ethan is arrested at the start of the episode – we know because we open with yet another of those damned previews! – but he just wants to be with his girlfriend., Anna.   Anna believes he’s not guilty of the crime he’s accused of.  This is probably because of that weird thing we used to need in criminal cases… oh, what was it called… yes!  EVIDENCE!  There’s none of that pesky material anywhere, so she just wants her boyfriend back.  Weirdly enough, so does his dad, a man who dresses quite well to hide in shrubs.  (Fan of The Prisoner, perhaps?  No, that hadn’t happened yet!)  Anyway, the episode drags on slowly as Ethan and Anna make a run for it while the cops track them with stunning ease.  It’s gives dad a chance to explain things after a few failed attempts.  “I’ll explain another time!”  (A precursor to Doctor Who; I am quite certain Jon Pertwee’s Doctor learned a lot from this episode.  What do I mean?  I’ll explain later…)  During these explanations, Mulder hangs out on rooftops, listening to what’s going on.   (In his journal, there are pages of the words “I was right” written over and over again!)  It’s all very slow, and plodding, but it gets there in the end.

Eventually we get away from everyone, or more accurately, everyone ends up at the spaceship launch site and instead of being a threat, dad freezes everyone, then leaves, without his son.  A real letdown for dad; the airfare was probably not cheap.  And Ethan goes back to Anna and the townspeople forget about the supposed murder because the only evidence anyone has now is that Ethan was from space, and who wants to lock up those people?  (Especially when they can rip through handcuffs with ease!)   The Control Voice tells us something about how we all want to be loved.  Aww…  But that wasn’t the message I got.  I picked up on a far more Earth-friendly idea.  It stemmed from the idea that the people of Eros, the planet our weird looking dad came from, don’t dream.  They had lost the ability to dream, to imagine.  Only in coming to Earth were they able to start to dream again.  Which makes sense because this planet is full of beauty and wonder and awesome people and amazing accomplishments and great jobs and cool technology and phenomenal websites (junkyard.blog).  Yeah, it’s got the nightmare side of the coin too, like politics and Covid-19 and …politics… but those bad things give us dreams too.  And sometimes nightmares…   So of course it’s the people who dream that are the heroes, the good guys, and the people to aspire towards!   They are the ones who come up with the stories.  And based on the time this series was created, they created the future.  They were the ones that created the worlds of science fiction that makes the Junkyard our home.  I am so very thankful for the dreamers.  (Now, I may be regretting that tonight when I sleep, and continue to wonder where Spider County is, why it was named, and how close I might be living to it…)    ML

…for the time being. If I have to watch another of those spoilerific teasers at the start of an episode I might just throw the remote control across the room. I can’t tell you how much they irritate me, often spoiling the best moment of an episode and undermining the flow of an episode when we reach that point. I would be tempted to skip that bit of each episode, if it wasn’t for the fact that we did actually get an extra scene one week instead of something nicked from later in the episode, so I can’t trust that it won’t happen again.

It might seem arbitrary that I’m mentioning this now, being as it has been happening for five months, but that’s because this is an episode that makes it difficult to find much of interest to say. Simply put, there’s not much story. An absent father turns up after all the hard work of raising a child has been done by somebody else, and tries to take control of his son’s life. It’s a very human story, and one that will probably be familiar to a lot of viewers. The fact that the father is an alien is relatively arbitrary. The story still plays out much like it would in any human situation. The son has his own life, and however screwed up that might be right now he’s not willing to jack it all in and go off with a stranger who calls himself his father, especially as there’s a cute girl in the picture.

This wouldn’t be an Outer Limits episode without something alien going on, but it really does feel like a simple human drama with a sci-fi element bolted on to it. It doesn’t help that the Erosian plan is very hard to believe. They are facing extinction because they cannot produce male children, so they decide to mate with human females. But if they think it’s the climate that makes a difference, why not just have a holiday with Erosian males and females on Earth, get jiggy with it here, and then go back home? Why do they need human females at all? The climate excuse is of course hilariously silly. I can understand that a man will look for any excuse why his swimmers don’t swim so well any more, but I really can’t stand the old sci-fi cliché of a whole planet climate. It’s bad enough when an alien planet is shown to have one climate for the whole globe, but the Erosian plan bizarrely works on the assumption that we have that here too. When they realise it’s nothing to do with average yearly rainfall in Spider County, they come up with another excuse for their doggy paddling swimmers:

“I think it was because here we once again caught the fashion of dreaming.”

Now unless they are getting busy in their sleep… ew, let’s not go there. Somewhere bubbling under the surface were some good ideas, and this is actually one of them if you squint: the difference between ourselves and an alien species being the ability to dream, and that somehow being a reflection of “having a soul”. It’s interesting stuff, but the mental leap from there to fertility is a bit much.

Although it was a relatively sub-par episode, there was still plenty of fun to be had this week. The alien in a smart suit was gloriously incongruous, and Kent Smith put in a great performance as a father trying to quietly manipulate his son. I’m getting a bit fed up with blurred lens effects, but when that was paired with dry ice for the forest scenes it worked really well. Most of all, I enjoyed the happy ending, and the idea that blood is not always thicker than water. Ethan’s love for Anna prevailed in the end, and their two fathers couldn’t destroy that love, even if one of them had a gun and the other turned up with tempting promises of a new life.

In the end I don’t think the problem for the Erosians was anything to do with the weather or their dreams. Ironically for a planet named Eros, they just didn’t understand love.

Read next in the Junkyard… The Outer Limits: Specimen: Unknown

Co-writer on junkyard.blog. Author of windowsintohistory.wordpress.com. Editor of frontiersmenhistorian.info
View all posts by Roger Pocock →
This entry was posted in Entertainment, Reviews, Science Fiction, Television, The Outer Limits and tagged The Children of Spider County. Bookmark the permalink.

1 Response to The Outer Limits: The Children of Spider County