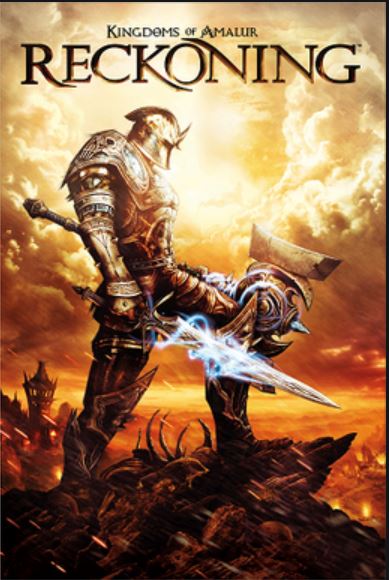 Baldur’s Gate and my recent foray into Pathfinder hasn’t quite scratched my itch for a good RPG.  I mentioned this to an old and dear friend of mine and he said he quite enjoyed Kingdoms of Amalur Re-Reckoning.  So why not, just because it’s got a sinfully awful name, I wasn’t against giving it a try.  It took me a little while to understand why it has a terrible name; the version I picked up on Steam is a recent remastered re-release of Kingdoms of Amalur Reckoning, released in 2012 by 38 Studios.  THQNordic and Kaiko are responsible for the remastering.  That was why they felt put an added “re” in front of Reckoning.

The game picks up right after your death where you wake up with no memory and begin your quests with the standard “find the guy who can help you” and moving on to the “go clear out the mine” variety.  Now, I have to admit I’m not done with the game but based on the sheer number of quests I think I might need a year to complete it.  This has been a year of long games with Assassin’s Creed starting me off.  But let’s first talk about the game itself.

My first thought was that I wasn’t loving the character graphics.  They are somehow clunkier than I expected.  The character animations reminded me of Fable from my limited recollection of that game.  This bothered me a lot… for the first 5 minutes.  After that, my feelings faded as the gameplay was so insanely intuitive.  In fact, that gameplay is easily the biggest selling point.  It’s not an easy game, but it’s an easy-to-play game.  I go for side quests a lot before tackling main quests which means by the time I’m ready for the tougher battles, I’m pretty mighty.  So sure, I might  still be in for a rough haul with some fights, but the way it plays is very easy  to work with.  You get a ton of stuff throughout the game that you’re not sure if you need to sell or if you should hold onto, but you can amass money hand-over-fist which is great for buying more gear.  But the amount of stuff is also a let down for a major reason…

It’s also the thing that put me off the game and, while I will go back to it, it hurt a lot.  I arrive in a town that was under attack by giant spiders.  I helped fend off the attack and started talking to a man at the front of the town.  The weirdness of the camera angle shows me talking to an open area and the dude is nowhere to be seen, but who cares.  He tells me what I need to know, and off I go.  The fact that there are so many quests means it’s easy to get distracted.  After playing for days, I completed the man’s quest, went back to town, and found him lying dead on the ground.  I try talking to him anyway.  Nope, like many a dead person, no dialogue was to be had.  I realized the reason he didn’t appear on the screen when he gave me the quest was that the spider venom killed him after we started talking and the game didn’t catch this.  Which means I have a quest that cannot be completed.  I looked online for advice, but the only advice is to reload to before the guy died.  Now, that was days earlier.  I’m actually better off restarting the game.  To compound matters, that guy apparently gives you a house for your troubles, meaning all that aforementioned stuff could be stored so you don’t have to sell everything you find.  (Listen, when I find a part of a set, I hold onto it in case there’s more to be had!)

As if that’s not enough of a letdown, there are side quests and there are tasks. A task is like a side quest but has no end.  So I get one that says “go get me armbands”.  Off I go and come back with a dozen armbands.  Basically it’s a way to make money but I’m a bullet-point kind of guy; I like getting my tasks done and seeing it completed.  (A part of my job that carries over into my play time!)  So now I have an unfulfilled side quest and half a dozen un-completable tasks.  C’mon!  That’s not cool.  Where are my check marks?!

Now, I do have to admit that while it was a letdown, I have absolute confidence that I will go back to the game because it makes up for its weaknesses in other ways.  For one, the voice acting is dynamite.  It’s populated with Scottish and Irish accents that I could listen to all day.  My god, I loved talking to people.  Once I got used to the slightly clunky characters, I even started to like the way they looked and found a few of the ladies rather fetching.  I was disappointed that unlike Mass Effect or Dragon Age, I could not get them to travel with me.  And the music, something I often lower in games, is fantastic, worthy of a soundtrack.  Some pieces are soft and melodic while others are perfect for a good action sequence.  I was really loving the music in fact.  Plus the locales are utterly beautiful; we’re talking “release the art book” sort of stuff, with loads of variety between towns.

So it’s a weird game because on the one hand, there are elements that really hurt the game, while other elements really make it a wild success.  I do think that quest-based games need command lines to reset a given quest just in case a glitch occurs.  I’d love to be able to get into the admin console and type “reset spider quest” and just have to redo it but no such command seems to exist.  That, or make it where NPCs can’t be killed.  (That’s Non-player characters for those not big on gaming.)  In Morrowind, which predates this game by years, if you killed a key player, a message would pop up warning you to reload from a previously saved place.  (Or maybe that was just because I killed the god, Vivek.  God’s might get special notice, I don’t know.)

I did like the skill tree which allows you to customize your play style, essentially for a fighter, wizard or rogue.  To my surprise, I played best as a rogue wizard combo.  I almost never play rogues, but I really liked the stealth ability of the character.  The wizard abilities made for some fun long range blasts too.

The thing to remember is that this comes from a decade ago and is still really playable, but you have to watch out if a quest giver dies.  It’s not going up against any modern games for an award but it sure holds up as a fun game for people in search of a lot of quests.  I picked the game up for $40, got 30+ hours out of it so far and, without ever leaving the continent I’m on, still have at least double that to go to complete it.  (That’s the other thing, there’s 3 continents; more than enough space to get other quests!)

Give the trailer a review and see what you think.  I don’t think you’ll be disappointed.  ML

Like Loading...
This entry was posted in Entertainment, Games, Reviews, Science Fiction, Technology and tagged Kingdoms of Amalur. Bookmark the permalink.

1 Response to Kingdoms of Amalur Re-Reckoning